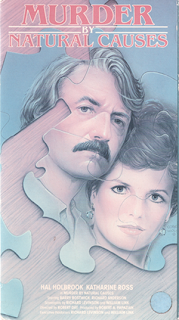 Directed by:
Robert Day
Watching stripped-down movies like this one every once in awhile is definitely a good filmgoing habit because it instantly make you aware of just how important a strong screenplay actually is. Here we have a no-frills, fairly low-budget TV production that's dialogue-heavy, has minimal location change, minimal action, no violence, a small cast and very few visual flourishes. You won't find any rapid-fire editing, hacked-off limbs, dramatic music cues, camera calisthenics or reactionary cheap tricks here. But even though it's missing many common theatrical techniques, this film manages to generate plenty of suspense, intrigue, eeriness and, ultimately, good old fashioned entertainment. And it does so entirely through a clever screenplay written by Richard Levinson and William Link (also executive producers), and a solid cast to help drive home the material. Levinson and Link are well-known, award-winning writers who often worked together on teleplays for such shows as Mannix, Columbo and Murder, She Wrote, and many other movies, made for both theaters and TV. Together they've won three Edgar Allan Poe awards (including one for this film), several Emmy's and other awards. So far, this is the best of the TV films I've seen from them.
World-famous mentalist Arthur Sinclair (Hal Holbrook) seems to have it all; money, a successful TV career, a beautiful home, a loving younger wife named Allison (Katharine Ross), a publisher (Richard Anderson) who's just set him up with a 300,000 dollar contract to continue a series of best-selling books... Looking from the outside in, the only problem is his health. After a heart attack a few years back, Arthur's been saddled with a pacemaker, which seems to be doing its job, but hey, you never know. Amongst those wanting to take advantage of the bad ticker is Allison. She's not quite the woman Arthur seems to think she is. After all, she's having an affair with a naive, struggling young actor named Gil Weston (Barry Bostwick), who's a bit frustrated and desperate because he hasn't quite had the breaks he's needed to be very successful at his craft. In cooperation with her new lover, Allison hatches a scheme to try to frighten poor Arthur to death. To reveal any of the twists, turns or plot surprises is to spoil the movie, so I'm stopping right here.
The entire cast (highlighted by Holbook's great performance) is good and also includes veteran actress Jeff Donnell (who appeared with Boris Karloff and Peter Lorre in 1942's THE BOOGIE MAN WILL GET YOU) as Anderson's maid, Bill Fiore as a smarmy TV talk show host, Victoria Carroll (NIGHTMARE IN WAX) as an airhead actress, Phil Leeds as a private eye and Judith-Marie Bergan (BLOOD RAGE) as a production assistant. The actress sharing stage with Bostwick is Rosanna Huffman, Levinson's wife. Director Day also made CORRIDORS OF BLOOD (1958; which starred Karloff and Christopher Lee), THE HAUNTED STRANGLER (1958; again with Karloff), FIRST MAN INTO SPACE (1959) and the genre TV movies HOUSE ON GREENAPPLE ROAD (1970), RITUAL OF EVIL (1970) and THE INITIATION OF SARAH (1978).
Sadly, this is another title that's pretty much sunk into obscurity. It was originally shown on CBS and there was a U.S. video released from the company Lightning in the 1980s, but other than that this one's a bit difficult to track down these days. There's no official DVD as of this writing, but hopefully that will all change. Hey, how about a Levinson/Link box set?
.
Debuting at my #2 spot (right behind ALIEN) for 1979's Top 10.
.
★★★1/2
Posted by The Bloody Pit of Horror at 12:09 AM 4 comments: