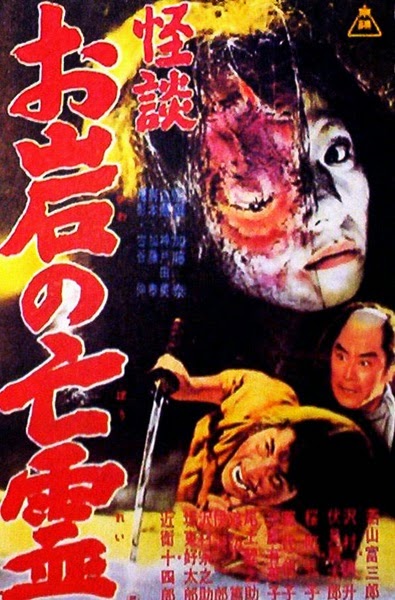 
This tale of greed, betrayal and revenge from beyond the grave is based on "Tōkaidō Yotsuya Kaidan;" a kabuki play by Tsuruya Nanboku and one of the most famous and influential Japanese ghost stories ever written. It was so popular, in fact, that it was filmed nearly 20 times (!) between 1912 and 1937 alone and well over 30 times in total; influencing all manner of later stage plays, paintings, anime, movies (including hundreds of recent 'pale, long-haired ghost girl' movies filmed throughout Asia), you name it. Among the most famous of the filmed versions are Nobuo Nakagawa's excellent THE GHOST OF YOTSUYA (1959), produced by Shintoho and usually considered the very best of the adaptations, and Shirô Toyoda's ILLUSION OF BLOOD (1965), which was produced by Toho Studios and is also quite good. Falling right in between those two is this one, which was a Toei Company production. I guess every major Japanese studio just had to film this particular story.

Things center around Tamiya Iemon (Tomisaburô Wakayama) who, as the film opens, is searching for his runaway wife Oiwa (Yoshiko Fujishiro), who fled from him because of his violent temper (and the fact he killed someone). Tamiya's father-in-law also wants nothing to do with him and doesn't want Oiwa, who has been hiding out in his home all this time, to stay married to a known murderer. Having fallen on hard times due to an ongoing war, the father-in-law has little choice but to put his youngest daughter Osode (Hiroko Sakuramachi) to work at a massage parlor / whorehouse. The agreement is that she only works as a masseuse, but naturally the beautiful Osode becomes a coveted piece of tail at the establishment. Already betrothed to Yomoshichi (Sentarô Fushimi), Osode also has an obsessive admirer in Naosuke (Jûshirô Konoe), who is willing to do anything it takes to get his hands on her. In order to get the women they want, Tamiya and Naosuke strike up a bargain. They murder the father-in-law while Yomoshichi is off serving in the war and then take "ownership" over the two sisters; promising to avenge their father's death (which naturally never happens since they are the killers).

A year passes and, not surprisingly, neither of the couples are happy. Osode refuses to have sex with Naosuke and threatens to kill herself with a dagger if he forces himself upon her. Even worse, despite having a baby, Tamiya becomes resentful and abusive toward the miserable and sickly Oiwa. He beats her, berates her, kicks her and even sells the mosquito net protecting their baby for drinking money. Tamiya finally comes to the conclusion he wants rid of her altogether and, rather conveniently, the accommodating and wealthy Ito family move in next door. The Ito daughter Oume falls in love with Tamiya, so they all conspire to kill Oiwa by giving her a poison "potion" that ends up horribly disfiguring her face and leading her to commit suicide. Tamiya then kills thieving helping hand Keiho; justifying the crimes with an adultery alibi. Oiwa and Keiho are nailed together on a board and sunk in the river and Tamiya is then free to marry Oume.

It doesn't take long after the deaths for the ghost of Oiwa to return to settle the score. She appears to Tamiya on the night of his honeymoon and ruins the festivities by causing him to accidentally decapitate his new bride and slash to death the entire Ito family and servants. From there, Tamiya retreats to a mountain sanctuary where he continues to have scary visions of the people he murdered and starts going mad. When Yomoshichi returns from war service, he, Osode and Naosuke (attempting to redeem himself) head to the sanctuary for a final confrontation.

I've already seen several versions of this same story, but this is a solid, well-produced version itself and sticks very close to the source material (unlike some of the others). The actors are all fine, including lead Wakayama, who'd already played this same role in a 1956 version of the story called Yotsuya Kaidan, which was directed by Masaki Mori and is currently not even listed on IMDb. The horror scenes toward the end (including a blood hand reaching up out of a wash basin and a board with the corpses nailed to it rising from the swamp waters) are also well done. The only real qualms I have with this one are that some of the scene transitions and editing cuts are abrupt and the staging of the finale is a bit on the messy side.