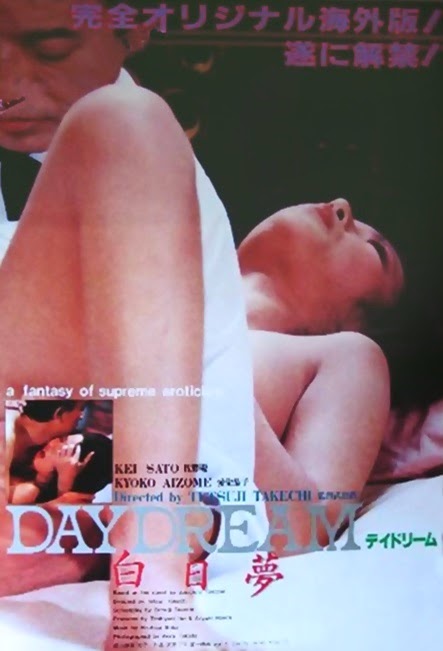 
This is a full color remake of a mostly black-and-white film from the same director that caused quite a stir in Japan back in 1964. That film, also titled Hakujitsumu / DAY-DREAM, was not only the first big budget effort in the 'pinku eiga' sexploitation subgenre but also one of the very first Japanese films to dare to (very briefly and only partially) show a glimpse of pubic hair; a big no-no in Japan. That resulted in the film being one of the first of its type to be optically blurred by censors. Day-Dream '64 would also lay the groundwork for later socially and politically critical films from the controversial Takechi; at least one of which landed him in court on obscenity charges. After taking a breather in the 70s to do some writing and host a talk show, Takechi (nearing his 70th birthday by this point) returned in the early 80s with this new film. It, like his previous efforts, was made specifically to stir up controversy and poke at the artistically-repressive hornet's nest that was the government. However, by this point in the game, there was really only one way to do that. Forget glimpses of pubic hair, this one was going to have full-blown hardcore sex. Of course, the sex scenes would still have to be fogged out for legal distribution in Japan, but Takechi had successfully made history yet again by making Japan's first theatrically-released film to feature hardcore sex... even if the audiences there didn't exactly get to see it. 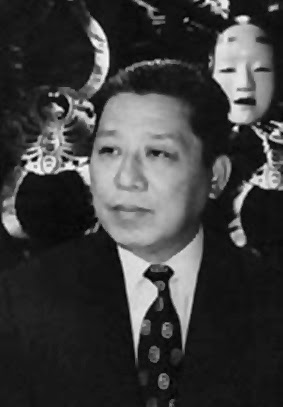 
The most familiar face to genre fans however will be that of male lead Kei Satô, who had appeared in three major Japanese horror classics of the 1960s: Kwaidan (1964), Onibaba (1964) and Kuroneko (1968) and was a regular presence in the films of acclaimed Japanese New Wave director Nagisa Ôshima. Surprisingly, Satô (53 years old at the time of filming) is not only involved in the film itself but also is the only male even involved in the hardcore action, In fact, there's only one male-female sex scene in this - spread over a whopping 20 minutes time in bits and pieces - and he's the male half of it. This would not only make him the first male actor to appear in a hardcore scene in a major Japanese release, but perhaps also the first male actor with an award-winning mainstream career still very much in full swing to ever go the hardcore route. The notoriety of having a big star in a scene of this nature was one of the reasons the film became a bit hit in Japan.

Things open exactly like they do in the original version, right down to using many of the same shots. At a dentist's office, Mr. Kurahashi (Takemi Katsushika) is in the waiting room anxiously awaiting a tooth extraction when the lovely, meek-looking and kimono-clad Chieko Hamuro (Aizome) comes in. The two are both brought back to see the dentist (Satô) at the same time, where Chieko gets lots of phallic instruments poked around in her mouth, has water squirted all over her face and paste rubbed all over her teeth, gums, lips and face in exaggerated and overly-long shots. Both patients are put under with laughing gas and then things start getting weird. The dentist and his two female assistants (Saeda Kawaguchi and Yuri Yaio) decide to “loosen” Chieko's constrictive clothing by basically ripping open her top. The two assistants then sport vampire fangs and the dentist begins sucking on everyone's nipples. As all that's going on, Kurahashi looks on in his drug-induced state as the film then cuts away from his hallucination to another longer one.

We're swept off to a neon nightclub where we again meet up with Chieko and Kurahashi. He wants to get her away from her older, controlling, abusive lover (also Satô), who he brands “the devil.” Under his spell, a powerless Chieko declines his offer and accompanies her lover home. Kurahashi follows. Chieko's lover proves to be both gentle and sadistic. One moment he's softly caressing her, rubbing her and even sucking her toes (bleh) and the next he's tying her up and terrorizing her. In between passionate XXX sex, the lover strings her upside down, kicks her, slaps her, whips her and even threatens to cut her up with a scalpel. All the while, an anguished Kurahashi watches from right outside the window. He screams, bangs on the glass (which doesn't shatter) and cries, but his noise falls on deaf ears. Afterward, while her lover is sleeping, Chieko swipes his keys, flees the apartment house naked and steals his car. She ends up running the dentist over and decapitating him in the process, then drives off again. But try as she might, Chieko has a harder time ditching her lover than she probably expected. She keeps seeing him again and again, now as a vampire count, while Kurahashi continues his pursuit of the young woman in an unsuccessful attempt to “help” her.

Because the bulk of this movie is a dream, the director pretty much just does whatever he wants at whatever pace he wants and, as a result, the film has the same exact tedious pacing problems as the original version. Certain scenes and individual shots - three minutes of dancing, several minutes sitting inside a car as it goes through a car wash, wandering through a department store, that damn “escalator scene” once again - go on for far longer than they really need to. The fact this runs half an hour longer than the first to accommodate the sex only exacerbates this issue. On the plus side, this is actually an improvement over the first due to higher production values, a more vivid presentation (the story itself seems much more suited to color) and the addition of some interesting new sequences (including ones set at the car wash and an amusement park horror ride). The best thing about this one though is the cinematography (six photographers are credited, including Akira Takada) and colorful lighting schemes, which are striking and often downright brilliant. This movie may not make much sense, but it at least looks really good doing it.

Immediately after Takechi's first version of Daydream, Hyun Mok Yoo decided to remake the film in South Korea under the title Chunmong (1965; aka Empty Dream), which proved to be nearly as controversial as the original and also got its director into hot water. None of these earlier versions -nor the 1981 one - have been officially distributed in the U.S. on home video. However, a fourth version, a “sequel” this time and also directed by Takechi and starring Aizome is much easier to find under the title Captured for Sex (1987). Decades later in 2009, Aizome decided to co-direct (with Shinji Imaoka) a fifth version, also titled Hakujitsumu. All of these are based on a short story by Jun'ichirô Tanizaki.

The version I watched was the same one released in Japan which fogs or blurs out the frontal nudity and also puts bizarre images (including people wearing kabuki masks) over the hardcore footage to block it out. The original, uncut version featuring the unobstructed hardcore footage was passed around illegally in Japan for years but eventually made its way to the Netherlands for a home video release. Most of the uncut versions floating around are sourced from the latter, which is in Japanese with burnt-in Dutch subtitles.