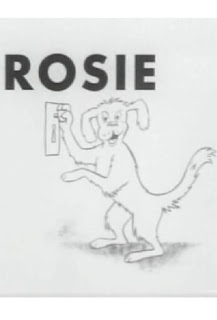 
There have been thousands of failed sitcom pilots over the years... but nothing quite like this misguided and unintentionally horrifying project. It centers around the Fletchers: your typical white bread 50s era Leave It to Beaver-style suburban family. Young son Kip (Charles Taylor) is thinking about running away and ends up meeting a new friend by some trash cans. His friend is a talking, world-weary dog named Rosie, who happens to be male despite the unfortunate name. Rosie convinces him to return to his family and spare them the heartache. The boy agrees, but under one condition: Rosie accompany him home and be his friend. Now you're probably thinking this isn't such a big deal. After all, we've had all kinds of gimmicky sitcoms over the year, including ones about talking babies (a spin off of the stupid theatrical hit Look Who's Talking), talking alien life forms running around trying to eat cats (Alf) and even one about a creepy little robot girl (Small Wonder) all spicing up boring family life. But here, the dog is played by a full-grown man (Phil Leeds) in a shaggy costume... and he looks like a scary werewolf! It's pretty weird and creepy seeing this thing walking upright on two legs, singing in its deep voice, talking like a New York City gangster, being petted by various cast members, peeping through keyholes at the family and weaving around the adult actors on his hands and knees. 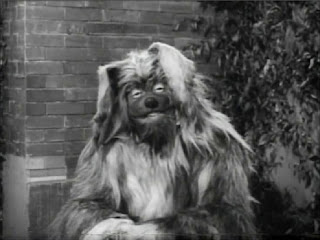 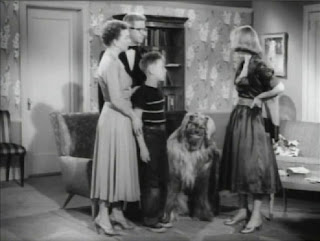 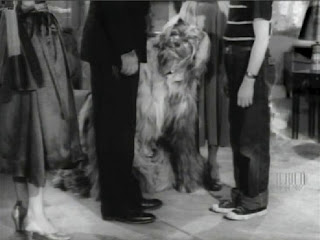 Aside from the creature, the plot is standard 50s cornball fare with awful acting and dialogue, good family values forced down your throat and cardboard sets. Kip brings Rosie home, but the family rejects him because of his size and the fact he knocks over a table and lamp. No one believes Kip when he says the dog can talk so he's forced to get rid of it. Instead, Kip takes the dog to his female neighbor, who hides it in her garage. The dog destroys a bunch of stuff and sneaks back over the to Fletcher home. While the parents and sister are away. Rosie manages to spoil a burglary attempt, leaping on the burglar, holding him down and saying, ""Repent! Repent! Pay for your sins boy!" Understandably, the burglar leaps out the window in horror. When the family returns home and learn that Rosie saved their son, they allow him to stay. The end. 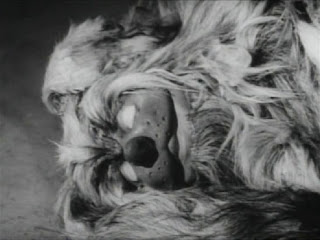 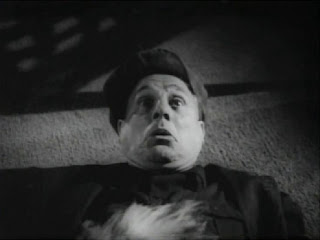 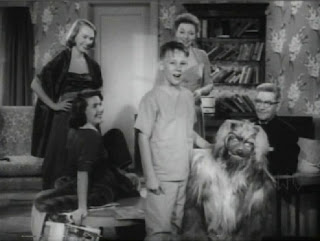 The short (which runs about 20 minutes) is available through Something Weird Video on the compilation DVD The Weird World of Weird. The production year is unknown but it looks mid / late 50s to me. (Edit: It' was actually made in 1960). Most of the actors didn't go on to do much else, though former stand up comedian and character actor Leeds (who passed away in 1998) had some success in film (including a small role in Rosemary's Baby as Dr. Shand) and on TV. Margaret Hayes, who plays the neighbor, appeared as a terrorized teacher in the classic Blackboard Jungle (1955) and in numerous other roles. 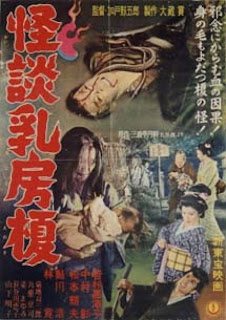 
Shigenobu (Asao Matsumoto), a very busy and popular painter whose work is so good that many feel it brings them good luck to hang in their homes or businesses, must leave Edo for several weeks to paint a dragon mural at a temple. He's just taken Namihei (Akira Nakamura), a former samurai (uh oh!) who lost his position because of his interest in art, under his wing as a pupil and apprentice. Because Namihei seems kind and trustworthy, Shigenobu decides to leave his beautiful young wife Kise (Katsuko Wakasugi) and his newborn baby Mayotaro in his pupil's care, which turns out to be a huge mistake. Driven by his desire for Kise, Namihei threatens to kill her and the baby if she doesn't "submit" to him. Feeling she has no other choice, Kise complies with his wishes, but that's not nearly enough for Namihei, who promptly kills, kills and kills some more to get his way. He strangles the maid Hana (Machiko Mizuhara) when she discovers what's going on and then bullies elderly servant Shosuke (Hiroshi Hayashi) into helping him with future schemes. 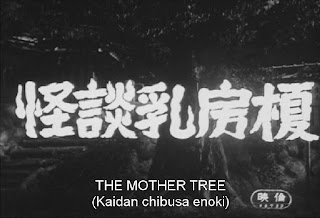 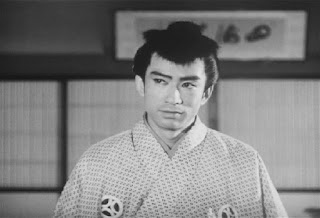 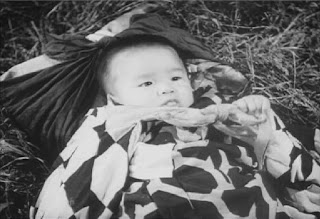 When Shigenobu returns from his assignment, Namihei lures him into the woods, kills him and then throws the body into a lake. Immediately, a fireball emerges and begins to follow him wherever he goes and he has visions of ghostly Shigenobu threatening him. Under the circumstances, Kise refuses to marry Namihei, which only pisses him off further, and for some strange reason she's unable to produce breast milk because of her husband's death, so she follows one of the fireballs to a magical "Mother Tree," which produces milk for it instead. The ghosts of Shigenobu and the maid continue to appear and after Namihei tries to get Shosuke to throw the baby into the lake, the vengeful spirits finally give Namihei what he has coming to him. It all leads to a tragic ending. 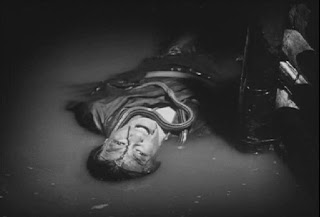 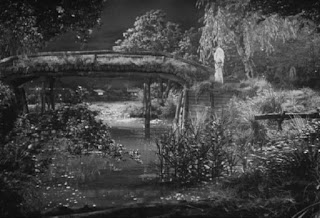 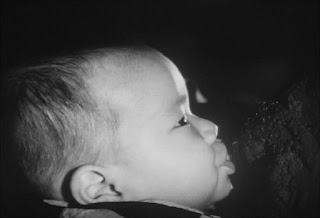 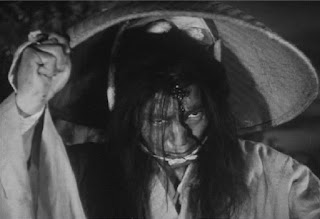 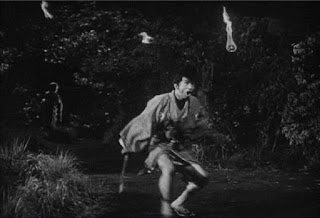 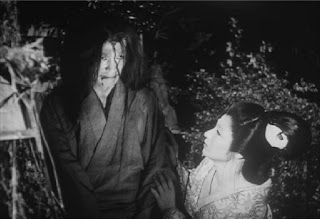 Based on the story Kaidan chibusa-no-enoki by Enchô San'yûtei (adapted by Torao Tanabe), this is one of the weakest kaidan I've seen thus far. It's corny and predictable, the editing and continuity are frequently off, many shots are overlit and the performances are either forgettable or annoyingly melodramatic. One of my biggest gripes though is with the characters. Not only are they underdeveloped, but nearly everyone is weak and annoyingly comply with whatever the bully - who holds no sway or real power in the village - says. During the floating fireball sequences, you can frequently see the strings holding them up in unintentionally hilarious scenes of the heavy swinging his sword around in a fury like some kid with a stick trying to bust open a pinata. The film begins on a lovely note though, with fireworks, paper lamps floating in the river and such. Too bad it's all downhill from there. 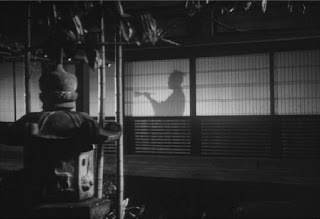 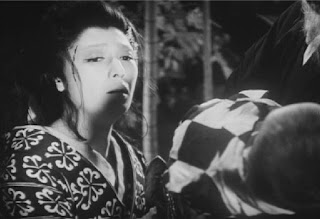 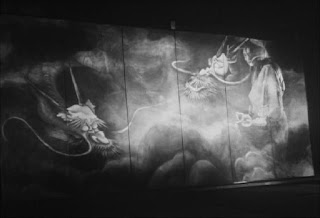 It has never been released in America.