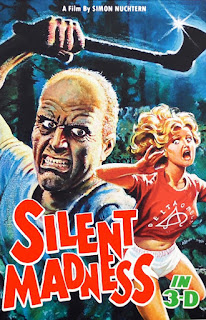 ... aka: Beautiful Screamers
... aka: Hiljainen tappaja (Silent Killer)
... aka: Locura sangrienta (Blood Madness)
... aka: Nightkillers, The
... aka: Omega Factor, The
Directed by:
Simon Nuchtern
I only vaguely remember seeing Silent Madness many years ago and the only thing that really stood out to me at the time was just how ludicrous I thought the entire premise was. I mean, an obviously still-unhinged psycho / serial killer with a long history of violence gets accidentally released from a mental institution and goes on to kill, kill and kill some more? That kind of stuff only happens in the movies, right? Well, no. First of all, I suppose I wasn't really paying close attention because that's not exactly what happens here. Second, I wasn't putting this in context and looking at what was going on at the time this was made. Now that I have, I can at least now see why it was made...
As Governor of California, Ronald Reagan had already slashed the state budget for mental health facilities, which resulted in many closures, nearly three thousand health care jobs cut and tens of thousands of mentally ill people forced into either nursing homes, privately owned group homes or out onto the streets. This resulted in an increase in the California homeless population but also an increase in homicides. Edmund Kemper, Herbert Mullin, Edward Allaway and Charles Soper were just four examples of former patients who weren't adequately treated and released prematurely and then went on to mass murder / serial killing sprees. This problem then went national in the 80s when Reagan became president. One of the first things he did was throw out the Mental Health Systems Act passed by the previous administration. By the end of the decade, hundreds of thousands of former mental patients were unaccounted for and thought to be among the homeless. Many of them were eventually ending up in prison for committing various crimes. Others were committing suicide or freezing to death on the streets. And then there was an uptick in homicides being committed by former patients (many of them diagnosed schizophrenics) who had no business being out roaming the streets. 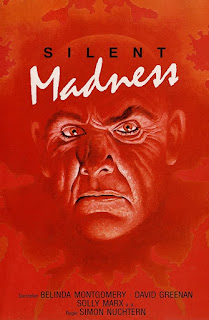 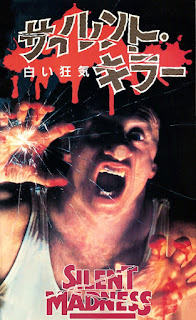 Silent Madness seems to be trying to comment on all of the above but that doesn't necessarily mean this is an intelligent or thought-provoking movie. It's not. In fact, it can be filed away in a peculiar category we'll call the "socially conscious slasher," where a film alludes to, or at least pays lip service to, topical social issues of the time to give it a veneer of respectability, yet doesn't delve into that subject matter in any meaningful, affecting way. It can then take a seat right next to VISITING HOURS (1982), which found its writer (Brian Taggert) and star (Lee Grant) trying to make a feminist statement within a slash-and-hack format but not pulling it off due to a high implausibility factor. Madness is also notable as one of a handful of 3D horror releases from a brief early 80s 3D revival. Unfortunately, this one came out a year too late to really capitalize on a craze that audiences had grown tired of after just a few years. 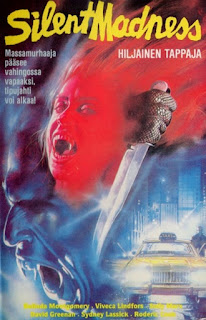 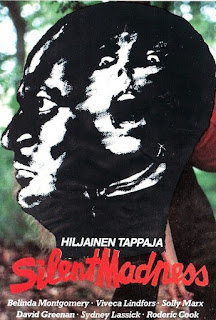 Psychiatrist Dr. Joan Gilmore (Belinda Montgomery) is a new employee at Cresthaven, a scummy Manhattan psychiatric hospital packed to the rafters with loons and staffed with slovenly orderlies who flick their cigarette butts on the floor and bitter, cynical doctors who appear to have stopped caring about their work a long time ago. The compassionate yet thoroughly professional Joan has a particular problem with budget-obsessed Dr. Michael Kruger's (Roderick Cook) release program, which has been recently turning patients loose, even ones with no ability to function on the outside world, at an alarming rate. She tries to voice her concerns to the flaky Dr. Roger Vandice (Ed Van Nuys), but he doesn't even know the patient's names let alone their status, and then goes to administrator Dr. Margaret Anderson (Stanja Lowe), who rolls her eyes at her as she informs her that they're "desperately overcrowded and understaffed" and that they barely have enough money to take care of the patients they do have.

Dr. Kruger notices that one particular patient, John Howard, is still there even though Dr. Vandice had already signed his release papers. Seeing how easily the two doctors just brush that aside, a suspicious Joan sneaks into Kruger's office, gets on his computer and discovers they've actually released the wrong person. Instead of the docile John Howard, they've let mute, criminally insane maximum security patient / serial killer Howard Johns (stuntman Solly Marx) loose. Oops! By the time Joan discovers the error, Howard has already picked up where he left off, started with camping couple Paul (Paul DeAngelo - SLEEPAWAY CAMP) and Susan (April Daisy White). This scene is a good example of how effects filmed specifically for 3-D release don't always translate over to a regular viewing, particularly a shot of the psycho throwing a silly-looking cartoon hatchet right at the camera. After killing these two, Howard makes his way back to the Barrington College for Women (he was arrested for a previous set of slayings called the "Barrington Sorority Murders") and starts slaughtering coeds again.
Back at the hospital, Joan discovers that Dr. Kruger has been conducting unorthodox, inhumane and illegal experiments on patients in an off-limits, locked wing of the hospital. Most of the patients he's been experimenting on have been deemed the worst of the worst and one of them was Howard Johns, whom Joan now suspects has been intentionally released by Kruger and his toadies. (The story of it being an accident is merely a smokescreen.) When Joan brings this up to the administrator, Kruger brings in a new set of forged documents stating that Howard has actually died, not been discharged.

Joan's given the weekend off and decides to do some freelance investigation work. She goes to the useless, lazy, drunk Sheriff Liggett (Sydney Lassick) for information but he just turns around and informs the hospital what Joan is up to. Next, Joan visits the local newspaper office where journalist Mark McGowan (David Greenan) hatches a plan. Suspecting Howard will return to the scene of the previous crimes at the Delta Omega sorority house, he suggests Joan pose as an alumnus passing through town needing a place to say. She could nab the patient and he could nab a great story.

Joan goes to the sorority and meets a few stragglers left behind (the college is on "mid-semester break"); good girl Jane (Katherine Kamhi, another Sleepaway Camp vet), fitness freak Pam (Tori Hartman) and blood-and-guts-loving Cheryl aka My Kinda Gal (Katie Bull), as well as overly-protective house mother Mrs. Collins (Viveca Lindfors); a lonely widow who's lost her only son, seems a bit unhinged herself and is first seen screaming at one of the girls and calling her a "whore" for exposing her bra. Unbeknownst to Joan and the sorority girls, the psycho is already in the house and has been hiding out in the (hilariously labyrinthine) basement, where he's already killed Barbara (Elizabeth Kaitan) and Lorraine (Paige Price).
As if the level of danger isn't high enough already, the evil Dr. Kruger and rest of the corrupt Cresthaven staff decide to send out a pair of sadistic orderlies; Virgil (Dennis Helfend) and Jesse (Philip Levy), to do some damage control. They're given specific orders to do everything possible to apprehend Howard. As for Joan, the orderlies hope to drug her ("I'm gonna shove this hypo in her tight ass and twist it around!"), rape her, kidnap her and then take her back to the hospital to be used as a guinea pig in Kruger's secret experiments.

While pretty preposterous at times, this is still surprisingly well-acted by most of the cast (experienced actress Montgomery in particular makes for a very good heroine) and extremely busy plot-wise to keep your attention from waning too much. For the exploitation fans, you get two topless scenes, black-and-white trauma flashbacks of the killer murdering four sorority girls with a nail gun after they ply him with alcohol and spank him (!) and a fairly wide variety of deaths, including a sledgehammer to the face, a hatchet to the back, a crowbar impalement, a face roasted with hot steam, a head smashed in a vice, a guy getting drilled in the back of the head during an attempted rape and, most cleverly, a girl hanging upside down on an inversion bar having her neck broken after the psycho ties a rope around her neck, attaches a weight to the other end and then tosses it out a window.
As for the finale, it's a mix of fighting, killing, running, hiding, climbing up and down ladders, going in and out of rooms and the air conditioning ducts, a Roto-Rooter attack (!) and assorted, sometimes hilarious over-the-top chaos. There's a pretty predictable plot twist, some cool lighting touches in a long boiler room chase scene and a couple of unintentionally funny bits, but, hey, at least it's not boring! And I am actually glad I revisited this one after all these years. It's still not great but it IS entertaining and much more fun than I remembered it being. 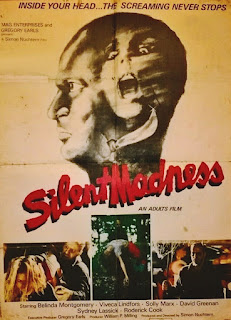 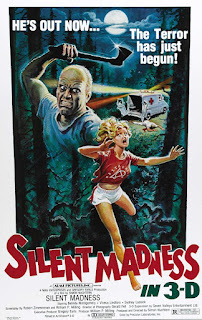 Made on a budget of 600,000 dollars, Madness was filmed in 1983, played in theaters in 1984 (where very few people got to actually see it in 3-D due to booking problems [supposedly NIGHTMARE ON ELM STREET was hogging all the space!]) and then hit the home video market in 1985 courtesy of Media. It was then reissued on VHS by Video Treasures a few years later. In 2020, it was given a 4K restored Blu-ray release from Vinegar Syndrome. Their release comes with 3-D glasses and has three viewing options: Digital 3-D, Anaglyph 3-D and Flat 2-D. It also comes with a 45-minute making of documentary Method of the Madness (directed by Michael Gingold), which features interviews with director / producer Nuchtern, writer Bill Milling, make-up artist Carl Morano and actors DeAngelo, Kamhi, Price, Hartman and Shelly Gibson.
★★1/2
Posted by The Bloody Pit of Horror at 3:48 PM 5 comments: