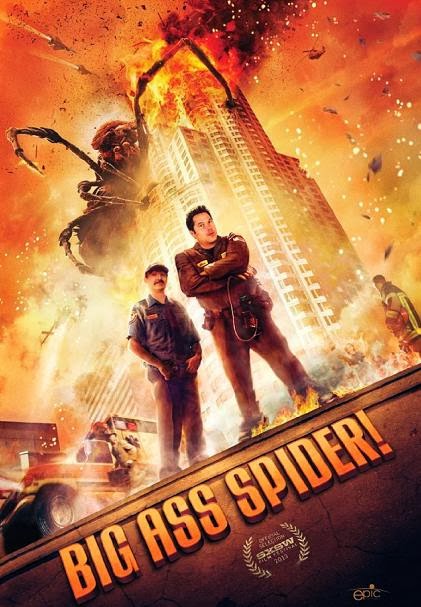 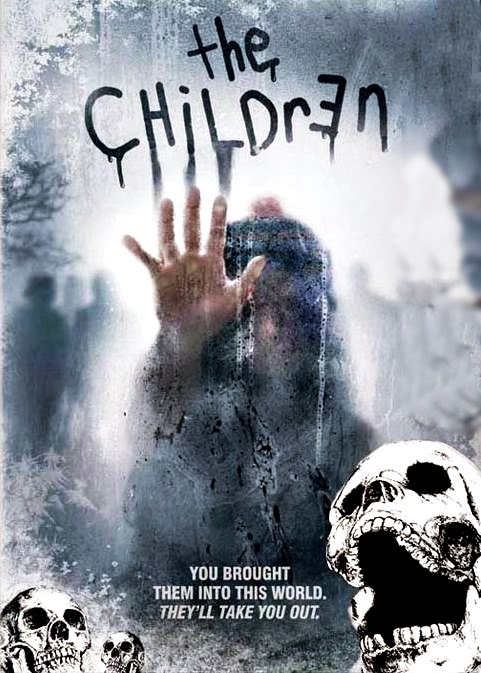 *PICK OF THE WEEK* Two married yuppie couples and their children (a rebellious teenage daughter who doesn't really want to be there and four little ones) get together to spend a pleasant Christmas holiday in the country. Well, that's what they were initially hoping for at least! One of the kids is sick, and quickly spreads whatever he has to the other three children. Unfortunately for the adults, it's not a case of the sniffles but some kind of highly-contagious virus that turns all of the children into evil, emotionless, calculating and homicidal psychos but doesn't appear to have any effect on them. Films about evil children have been a mainstay of the horror genre ever since The Bad Seed (1956) and Village of the Damned (1960), but this type of film has really taken off here in the past few years. Though poorly edited is spots and lacking much in the way of plot and substance, The Children still does the theme about as well as anything else I've recently seen. It's well-made, strongly directed and photographed, utilizes the wintery outdoor settings quite nicely and boasts solid performances from the entire cast. There's plenty of tension and suspense, some genuinely shocking, bloody and / or nasty moments and the filmmakers make the astute decision to leave the origin of the strange disease completely ambiguous because, quite frankly, it seldom really even matters in these things, anyway. [UK] [rec'd by Nan00k] ★★★
_________________________________________________________________________________ 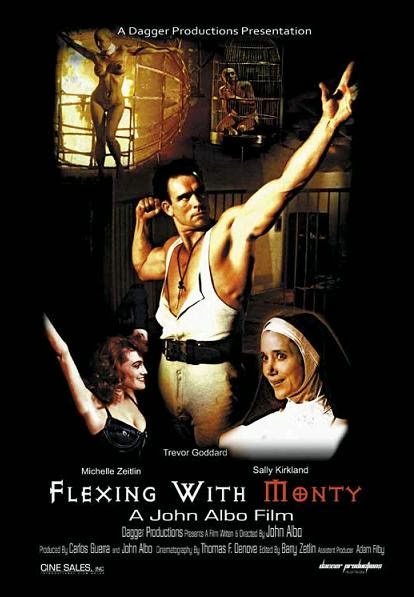 The late Trevor Goddard (who died of a drug overdose in 2003) stars as Monty; an obnoxious, narcissistic bodybuilder / PE teacher who spends all of his time working out, farting, fucking a blow-up doll, going on homophobic religious rants, thrusting his ass and crotch into the camera and flashing back to a better time in his youth when his loving granny used to massage his ass and give him hand jobs. His whiny younger brother Bertin (Rudi Davis) is a sensitive teenager who keeps some deformed and presumably retarded banana-eating, constantly-masturbating monkey-man with Spock ears in a cage in his bedroom and has been more or less kept isolated by his brother... who turns out to actually be his father. A nun (Sally Kirkland) finally shows up to wax poetic about the legend of the biblical Lilith and perform an exorcism on Monty's cock. After a production history of nearly a decade and a long period lying in limbo, Unearthed Films finally decided to unleash this monstrosity onto DVD. They really should have left it buried for good. Flexing with Monty is one of the most idiotic, self-indulgent, nonsensical, monotonous and annoying films I've ever had the misfortune to sit through. When the director isn't busy worshiping every inch of Goddard's sweaty bod (pretty much the sole redeeming factor of this production), he's busy forcing his cast to recite monologues filled with some of the most embarrassingly awful and irritatingly pretentious dialogue ever captured on film. Hideously awful. [USA] [rec'd by emertens] ★
_________________________________________________________________________________ 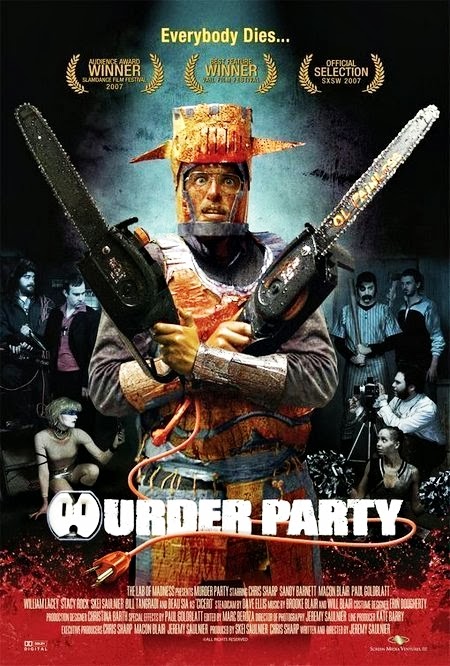 While walking down the street on Halloween night, geeky loser Christopher (Chris Sharp) finds an invitation to something called a "murder party" on the ground. Having no plans for the evening, he fashions a last minute knight costume made out of cardboard and decides to attend... only to find himself tied down to a chair with a handful of raving eccentric artists planning on murdering him and filming the act. Why? For the sake of art, I suppose. I think the intention here was to make a satire of the pretentious New York City art scene, but this film isn't particularly funny, nor is it scary or disturbing or compelling or really much of anything. There are a couple of laughs and a last-minute splattering of gory murders, but once the premise is established it really has no place to go and quickly becomes tedious, especially dragging in the mid-section. Nearly the entire film takes place in a dimly-lit warehouse, the acting ranges from OK to God awful and the characters come off as either obnoxiously one-note or completely unlikable (not even the lead character merits much sympathy as there's no real effort put out to humanize him). I'm giving this an extra point because for an extremely low-budget production it's fairly well-photographed and edited. Note: Some people seemed to enjoy this more than I did, so I'd still recommend giving it a look if you're curious. [USA] [rec'd by DaveHedgehog] ★★
_________________________________________________________________________________ 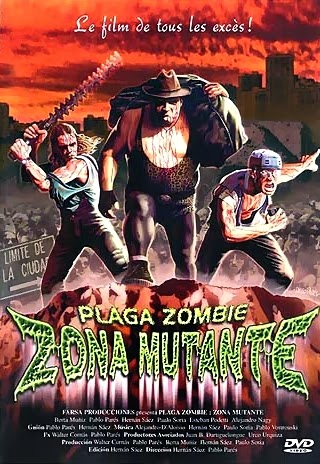 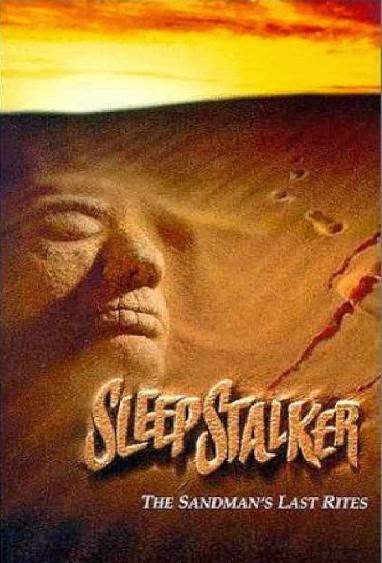 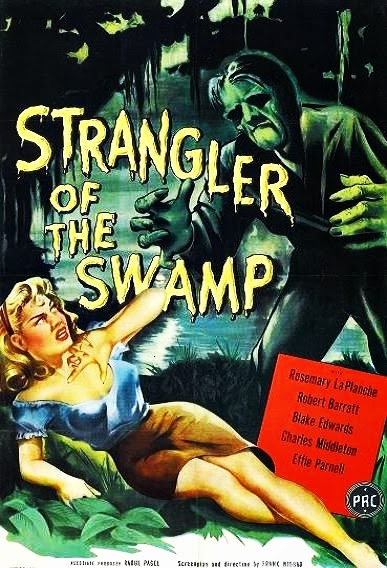 Strangler of the Swamp (1946; Frank Wisbar) [Viewed Jan. 22]
While WWII was underway, German director Frank Wisbar emigrated to the United States and ended up stuck working in the bottom-rung poverty row PRC Studio in Hollywood for his duration of his stay in the states (he'd return to Germany in 1959 where he made more films and lived out the remainder of his days). One of his crowning achievements while in America was this one, a remake of his earlier film Fährmann Maria (1936). Rosemary La Planche (who had been crowned Miss America in 1941) stars as Maria Hart, a young working class girl who travels to a small swamp-bound village to take over her late uncle's job operating a hand-pulled ferry. She soon realizes that the marshes are haunted by the ghost of a man who was wrongfully executed years earlier and avenges himself not only on his killers (her uncle included) but also their descendants. This utilizes typical 'doomed love' sub-plotting in which Maria may have to ultimately sacrifice herself in order to both break the curse and spare the life of the man she's fallen in love with. Standard writing and plotting, dated and melodramatic performances, rushed, ineffective old-fashioned romantic aspects and a spoonful of religious mumbo jumbo customary of its time bog this down some, but it's also wonderfully foggy and atmospheric. The sets are quite good, the female lead is a bit stronger, braver and more independent than what was commonplace at the time and Wisbar shows a fine eye for visuals and establishing mood. I'd imagine he'd have come up with something truly great given a good script to work with. [USA] [rec'd by Zombie_CPA] ★★1/2
_________________________________________________________________________________ 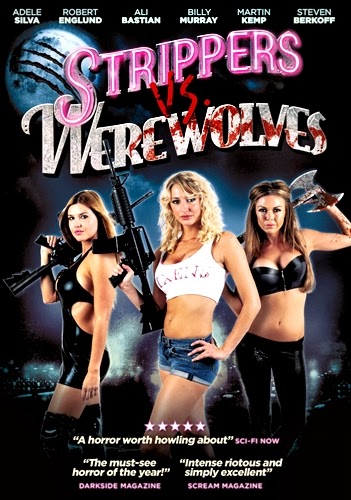 Strippers vs. Werewolves (2012; Jonathan Glendenning) [Viewed Jan. 26]
This joins the ranks of Zombie Strippers (1998) starring porn queen Jenna Jameson, Zombies! Zombies! Zombies! - Strippers vs. Zombies (1998) and Zombies vs. Strippers (2012) (yes those are all three different films) in this new "stripper" horror subgenre. What should one expect from these titles? Well firstly, obviously some T&A and sexy dancing. After all, these are strippers we are talking about here. Second, monsters doing battle with said strippers. And finally, a sense of humor. Strippers vs. Werewolves provides all three components, but sadly doesn't do well enough in any of the three areas to leave viewers feeling fully satisfied. There's some rather brief nudity in just a few isolated scenes and none of it is contributed by the leading ladies. Even worse, there's hardly any dancing OR stripping (boo!). The promised showdown between the vixens and the undead happens at the very end, is over before it even has a chance to get good and is horribly edited and directed to boot. As for the comedy, there are a few chuckles here and there, but it misses the mark more often that not. Everything is presented in a comic book-style fashion sometimes utilizing different panels showing simultaneous action, but it's photographed in such a dowdy and murky way that it doesn't come off as intended. In addition, the werewolf make-up designs are absolutely terrible. Sarah Douglas (playing the brassy strip club owner), Billy Murray (leader of the werewolf pack) and others do what they can to spruce this thing up. Robert Englund and Martin Kemp both also turn up in a useless cameos. [UK] [rec'd by alchemie666] ★★
_________________________________________________________________________________