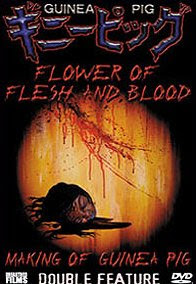 ...aka: Flowers of Flesh and Blood
...aka: Guinea Pig 2
...aka: Guinea Pig: Flower of Flesh and Blood
...aka: Slow Death: The Dismemberment
Directed by:
Hideshi Hino
Obviously there's an audience for this type of stuff, but a plotless 40 minute imitation snuff video isn't really my idea of entertainment. This is the first GUINEA PIG flick I've watched and I can't say I'm really looking forward to watching the other ones in the series to be perfectly honest. It starts with a warning about how no one under 18 should view it and then claims the story is a reenactment of actual events that took place in April 1985. In the pre-credits scroll, they say a cartoonist received 54 still photos, a 19 page letter and an 8mm film from a serial killer who filmed the dismemberment murder of a young woman and this movie is a reenactment using the available evidence as its basis. Whatever. An anonymous young Japanese woman is stalked, chloroformed and kidnapped. When she wakes up she's tied down to a bed in a mostly-empty room with blood-spattered walls. A maniac wearing lipstick and white face paint, and dressed in a samurai outfit, is waiting for her and ready to use his tray of torture toys on her. He cuts a chicken's head off and drizzles blood over her squirming body and tells her the same thing is going to happen to her. He then injects her with some sort of drug that supposedly will make her pain pleasurable.

Stoned out of her mind (as to show no emotion throughout) he proceeds to slowly dismember her entire body. He stabs her in the gut. He cuts off both her hands. He cuts off her arm; using a hammer and chisel to break the bones. He cuts off her legs using a saw. He uses a scalpel and his own hands to rip open her chest and pull out her guts. He decapitates her (in slow motion) with an axe. He scoops her eyeballs out with a spoon and sucks on them. Then he show us his "collection" of maggot and worm infested body parts. And that's about it, other than the samurai guy changing the light settings and passionately talking about "blossoms' and "blooms" and "precious jewels" and other such nonsense. As I said, this stuff isn't my cup of tea (I actually found it alternately disgusting and boring), but it's still fairly well done for fans of this kind of stuff. It's definitely sick and gruesome, is guaranteed to make most viewers feel grimy/dirty/queasy and the make-up fx are pretty excellent and effective throughout.
.
Also notable as the only Guinea Pig film to get a VHS release in the U.S. during the 1980s. A small company called Vidimax put it out under the title SLOW DEATH: THE DISMEMBERMENT. The 2002 DVD release under the Unearthed Films label pairs this one up with the behind-the-scenes documentary "The Making of Guinea Pig."
★★
Posted by The Bloody Pit of Horror at 7:57 PM