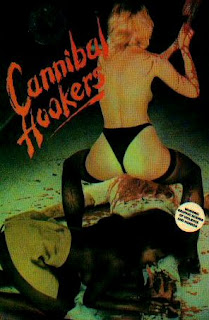 There's always going to be an audience for titles such as these (like me!) but most of the time you end up getting burned, and this is no exception to the rule. After some deranged, bald man eats a human heart, another guy picks up a hooker in a bar. She takes him back to her apartment, removes her top, bites off his finger and then chops him up with an axe. Meanwhile, college girls Hilary (Amy Waddell) and Dee Dee (Annette Munro) decide to avoid "all the social status of being raped by Nazis" by joining Gamma Zeta Beta, "the sleaziest sorority on campus." Stephanie (Sheila Best aka Tara the Southern Belle on G.L.O.W.: Gorgeous Ladies of Wrestling), queen bitch of the sorority house, decides that for initiation Hilary and Dee Dee must dress up like hookers and parade around on Sunset Boulevard until they can find a trick. The two pledges, as well as Hilary's boyfriend Bruce (Tommy Carrano) and his friends Darrell (Donald Trimborn) and Dwight (Matt Borlenghi), end up running across a slew of cannibal hookers who work out of whorehouse instead.
Oy ve. Where shall I even begin describing this exercise in cheap gore, cheap T&A contributed by ladies who certainly look their parts and camcorder production values? Let's just say I had more fun making the screen caps than I did actually watching the movie. So maybe you'll have more fun looking at the screen caps than you will reading my description? Enjoy...
. 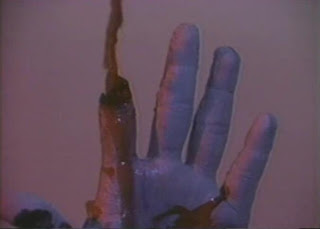 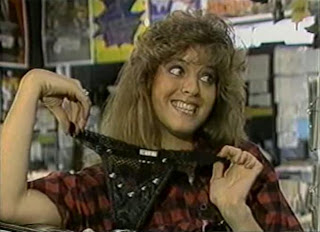 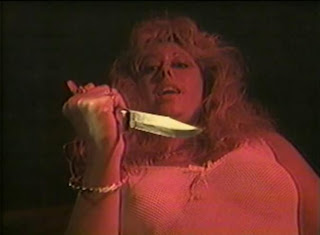 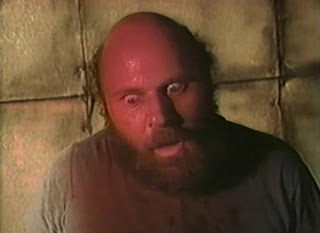 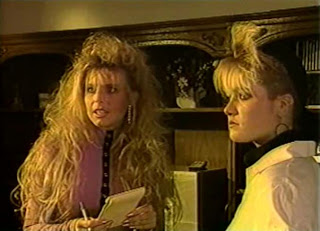 The 80s called, they want their hair bac... Ah, nevermind. 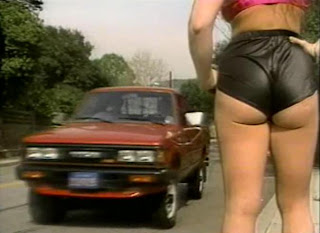 Honey, could you take the trash out to the curb? 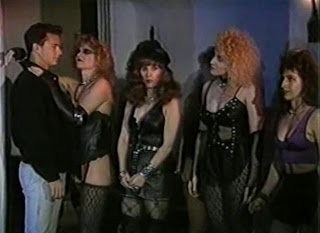 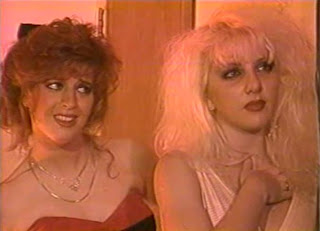 She was Courtney, when Courtney wasn't cool.
You still here, you big masochist, you? Trust me when I say that if the amount of fun were only half as big as the hair, this might actually be worth sitting through. Sadly, it doesn't even have enough cheap oomph to fill up 60 minutes. Actually, they didn't even have enough material to fill up 60 minutes either judging by the fact that an entire scene is actually repeated in its entirety for no reason whatsoever toward the end! Strangely, neither of the two protagonists even make it to the finale (nor is their any resolution to their story) and it's bookmarked with scenes of characters who don't interact with the main cast at any point during the rest of the film (likely because their scenes were tacked on later). Even more strangely, victims of the cannibal hookers return as vampires who attack and infect others. Or were they zombies? Hell if I could tell, but now that I think about it this movie is awfully similar to the terrible 1979 Filipino horror-comedy VAMPIRE HOOKERS (1979).
.
The opening credits theme song was also used in Farmer's DEMON QUEEN (1986) and footage from THE CURSE OF THE SCREAMING DEAD (1982) can be seen on a TV set. The cast includes Drew Godderis (EVIL SPAWN), Sky Nicholas (FATAL PULSE), Katina Garner (HACK-O'LANTERN; also an associate producer) and Marya Gant (A POLISH VAMPIRE IN BURBANK). One scene was filmed at the Hollywood Book and Poster Company, where owner Eric Caidin makes a brief appearance. And who could forget Gary J. Levinson (another of the producers) in his star making role as the big, bald, bug-eyed, human-heart-eating retard henchman Lobo? "No give? Lobo take!"
.
First released to unsuspecting video stores by Camp Video, the same folks who gave us the similar but much-better HOLLYWOOD CHAINSAW HOOKERS (1987). It was also later included in a fake four-part video/DVD series (distributed by Tapeworm) entitled I WILL DANCE ON YOUR GRAVE. Others in that "series" include KILLING SPREE (1987), W.A.R.: WOMEN AGAINST RAPE (1987) and SAVAGE VENGEANCE (1989).
★
Posted by The Bloody Pit of Horror at 9:36 PM 1 comment:

...aka: Death Warmed Over
Directed by:
David Blyth
I have two DVD players; one in my living room and one in my bedroom. The one in my bedroom is one of those temperamental bastards that only plays *certain* DVDs in my collection; namely the immaculate ones fresh out of the package. Anything else with even the faintest scratch or smudge, you might as well forget about. Strangely, that same player has no issue at all playing anything I pull out of any of those 50/ 100/ 70 Gazillion Movie Packs distributed by Mill Creek Entertainment. Even those discs I've forgotten to put back in the envelopes... which somehow end up on the floor... get covered in dust... are scratched up by my cat... and somehow get dotted with dried globs of Mountain Dew. My player just loves those, so that's usually what I pop in to watch right before bed since most do a great job of putting me to sleep. Death Warmed Up (aka Death Warmed Over) - released in their "Nightmare Worlds" set - is an exception to the rule. This movie is a complete and utter mess, but it did manage to keep my attention for 82 minutes. And dammit, I actually could have used some sleep last night! 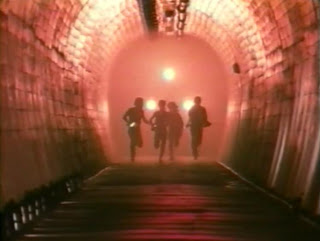 A pre-Peter Jackson New Zealand gore film that doesn't make a lick o' sense, DWU uses an old school mad doctor scenario to center its bizarre and nonsensical events around. The film starts with some promise. Professor Tucker (David Weatherley) and the thoroughly insane Dr. Archer Howell (Gary Day) are trying to concoct a formula to reverse the aging process. Howell gets greedy and, during an amusingly homoerotic sequence, sneaks up behind Tucker's son Michael (Michael Hurst) while he's taking a shower and injects the serum into his ass with a huge syringe. Michael goes nuts, surprises his parents in bed with a shotgun and then spends seven years in a nuthouse before being released. Now wanting revenge, a white-haired Michael, along with his girlfriend Sandy (Margaret Umbers) and another couple; Lucas (William Upjohn) and Jeannie (Norelle Scott), take a boat to a secluded island where Dr. Howell now runs a psychiatric hospital.
. 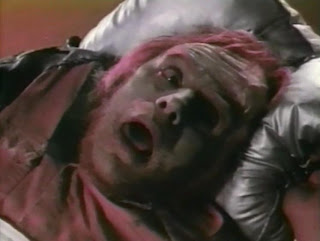 Once on the island, things take a turn into the truly senseless as Michael and company encounter a bunch of spastic mutant nutcases; Dr. Howell's failed experiments. In several scenes obviously inspired by Mad Max, the gang is chased and almost run off a road by some mutants while speeding down a dirt road and then encounter them again in underground catacombs where they chase them around on their motorcycles. There's plenty of blood, violence and gore to go around (including skull drilling and an exploding head), a pinch of sex, some decent camerawork (again, obviously Mad Max-inspired) and dark, foggy, futuristic set design inside of the clinic. The production values aren't bad and it's somewhat stylish, but there's way too much going on here. It's unfocused overkill that grows tiresome well before the end.
The cast also includes David Letch (who appeared - along with Umbers - in the underrated haunted car film MR. WRONG aka DARK OF THE NIGHT), Bruno Lawrence (THE QUIET EARTH) and Ian Watkin (the obnoxious uncle in Jackson's DEAD ALIVE). Vestron Video handled the original U.S. video release.
★★
Posted by The Bloody Pit of Horror at 6:11 PM No comments: