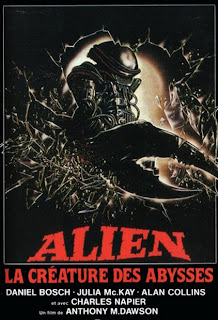 Science professor/reporter Jane ("Julia McKay"/ Marina Guilia Cavalli) and her cameraman Lee (Robert Marius), both of whom work for Greenpeace, travel to a remote, barely-populated island to investigate claims of illegal toxic waste dumping. They sneak into E Chem; a large, heavily-guarded geothermal plant, catch them throwing barrels of waste into an active volcano and take video evidence. As they're leaving, security camera catch them snooping around. Gruff Colonel Kovacs (Charles Napier, doing that hard-ass, jaw-clenching bad guy routine we love him for), the guy who runs E Chem, sends out some guards to capture them. Lee is smart enough to hide the tape before being apprehended. Jane, on the other hand, stows away on a helicopter, manages to leap out into a lake and is then pursued by the guards through the jungle. Jane is lucky enough to bump into brainy-looking, tobacco-chewing "snake hunter" Bob (Daniel Bosch), who's there on the island to acquire snake venom to see to a pharmaceutical company. With his help, Jane manages to get to safety, at least temporarily. She still plans on sneaking back over to E Chem to rescue Lee and locate the hidden video. We are now over 50 minutes into this movie and only one question remains: "Where in the hell is that alien?"
Rest assured, it does finally show up. At first we get mere glimpses of the beast's giant claw as it reaches out and kills people. The monster burrows through the ground and also seems to have either acidic blood or toxic blood that's been effected by the dumped waste. In other words, getting the green blood-gunk on you is bad news as it melts away your flesh. Several characters refer to it as an alien here. What I don't get is why they even bothered having it be an alien in the first place. They've already spent so much time with the chemical dumping plot, so why not just make it a mutant creature spawned from toxic waste? Oh well, I guess "Mutant Metal Crustacion from the Deep" just doesn't have that special ring to it. Well actually, I like the ring of that better, but it probably wouldn't have the same ability to rope in fans of ALIEN (1979) and ALIENS (1986). Speaking of ALIENS, the finale here is almost an exact carbon copy of its finale. The James Cameron film featured a tank top clad Sigourney Weaver using one of those yellow loading dock contraptions to push the alien out of a time lock into space, while this one features a tank top clad heroine using a yellow bulldozer to push the alien into a volcano. So much for originality.
You will need some patience to make it through this one. It's slow moving, the dialogue is pretty cheesy ("Don't come on to me, you snake squeezer!") and many of actors are poorly dubbed, but patience is rewarded with one of the most bizarre-looking monsters ever created. The best way to describe it by calling it an upright scrap metal crab. It's black, oily, skinny and very tall... and its claws are bigger than its body! The fact that someone actually designed this huge thing full scale is also pretty great and makes me resent CG effects more than I already do. There's a decent amount of violence (including a face being ripped off) and jungle action (including a scene where three guys are killed by leaping cobras in a cave), quite a few explosions and some decent miniature model work of the plant being destroyed. Technically, it's a well-made, well-budgeted movie, but as a whole it's still a bit too predictable, derivative and routine to have much staying power. Prolific Euro horror regular "Alan Collins" / Luciano Pigozzi has a good-sized role as nuclear physicist Dr. Geoffrey.
There's no R1 DVD release. I don't think it was ever released here in the U.S. on video either. It was one of the last films from Margheriti (billed here under his usual "Anthony M. Dawson" alias), who worked steadily in Italian films from the late 50s until the early 90s (and passed away in 2002). His other genre work (as director) includes HORROR CASTLE (1963), CASTLE OF BLOOD (1964), THE LONG HAIR OF DEATH (1964), WILD WILD PLANET (1966), SNOW DEMONS (1967), SCHOOL GIRL KILLER (1968), SCREAMS IN THE NIGHT (1968), WEB OF THE SPIDER (1970), SEVEN DEATHS IN THE CAT'S EYE (1972), KILLER FISH (1978) and CANNIBAL APOCALYPSE (1980).
★★
Posted by The Bloody Pit of Horror at 6:50 AM No comments: 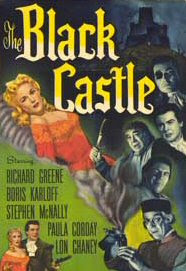 
Adapting the alias "Richard Beckett," Englishmen Sir Ronald Burton (Richard Greene) travels with his faithful servant Romley (Tudor Owen) to a small Austrian village to investigate the recent disappearances of two of his friends who were last seen in the area. He assumes Karl von Bruno (Stephen McNally), a sadistic count who seems to have a stranglehold over the entire village, has something to do with it because of an altercation that occured years earlier in Africa that cost him one of his eyes. Ronald has managed to snag an invitation to a hunting competition taking place on von Bruno's grounds (he's even imported a vicious black leopard in for the occasion) and decides to use the opportunity to search for either his friends (granted they're still alive) or evidence that will implicate the count in murder. What Ronald doesn't plan on is falling in love with his host's mistreated wife Elga (Rita Corday), who was forced into marrying a man who has no problem flaunting his infidelities in front of her. Various complications ensue, castle physician Dr. Meissen (Boris Karloff) becomes an unlikely ally and brutish, mute manservant Gargon (Lon Chaney, Jr.) lurks around in the hallways.

You certainly get your money's worth with this Universal production. Not only is it a well-made, extremely entertaining and nice-looking effort recalling the studio's classic era days, but it's also fast-paced, fairly well-plotted (Jerry Sackheim scripted) and offers up a pinch of just about every single genre under the sun. There's swashbuckling action, an exciting hunting adventure, romantic drama and excellent Gothic castle sets, secret passageways, a pit full of hungry alligators, a torture dungeon, a truly sadistic villain and Karloff and Chaney on hand for us horror fans. Both horror stars do what's asked of them here in their smaller supporting roles, but the film centers primarily around Greene and McNally. Thankfully, both actors are great in their roles. Greene is very charismatic and likable as our hero and McNally (in a role that will likely bring to mind the character of Count Zaroff in THE MOST DANGEROUS GAME) gives a terrific performance as the evil, eyepatch-wearing count. In addition, there are nice supporting turns from Michael Pate and John Hoyt as von Bruno's cronies and novel use is made of a fake death serum; an idea later recycled for the all-star Gothic horror THE BLACK SLEEP (1956).

Director Juran would go on to make the cult horror favorites 20 MILLION MILES TO EARTH (1957), THE BRAIN FROM PLANET AROUS (1957) and ATTACK OF THE 50 FOOT WOMAN (1958), but this is just as noteworthy - if not moreso - than his better-known films. The music score is all stock (including familiar snippets from THE WOLF MAN) and Bud Westmore (whose work adorns over 500 films) did the makeup.

Universal issued an excellent print of the film as part of their "Boris Karloff Collection" set, which also includes the films NIGHT KEY (1937), TOWER OF LONDON (1939), THE CLIMAX (1944) and THE STRANGE DOOR (1951; which was also written by Sackheim). 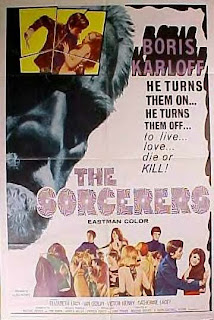 Elderly, impoverished professor Dr. Marcus Monserrat (Boris Karloff) promises to painlessly cure stammering, self consciousness, anxiety and other psychological problems through "medical hypnosis." He and his wife/assistant Estelle (Catherine Lacey) run a small clinic out of their own home where they treat patients, but are actually looking for a guinea pig in their mind-control experiments as young antiquity store owner Michael (Ian Ogilvy) soon finds out. While hanging out in a cafe, Michael is approached by Marcus, who promises "an extraordinary evening" if he'll simply follow him home. Michael, who's looking for some excitement and getting a bit bored hanging out in swingin' London clubs with his mechanic best friend Alan (Victor Henry) and sort-of girlfriend Nicole (Elizabeth Ercy), takes him up on the offer, allows the professor to hook him up to a machine, some psychedelic swirls are projected onto his face and now the professor and his wife can control his every action. Not only that, they can also feel exactly what he feels.
Though Marcus wants to immediately share his discovery with the scientific community so it can be used for good, Estelle talks him out of it. She wants vindication for him having been laughed at and discredited by his peers 30 years earlier, which effectively ended his professional career and caused them financial hardship ever since. Estelle first uses their hold over Michael to make him break into a store and steal a fur coat. She then wants to feel the exhilaration of speeding across the country on a motorcycle and the adrenaline rush associated with physical violence. The more she experiences, the more power-mad she becomes. Estelle incapacitates her already frail husband, destroys his equipment and eventually forces Michael to stab his ex-girlfriend (Susan George) to death with a pair of scissors and strangle a pop singer (Dani Sheridan). Michael's chums begin to realize something's not quite right and the cops (led by Ivor Dean) start to close in on him.
.
I'm not quite sure what the "point" of this might be, but the storyline itself is full of subtext that helps to keep things interesting. We have an older couple controlling and living vicariously through a young host; experiencing the thrills and highs of a liberated, carefree youth that they likely never had a chance to experience in their own lifetime. As compromise, any time Michael experiences pain or injury, it's also felt by Marcus and Estelle. We also have the power play between husband and wife. From all indications, Estelle has been a supportive, subservient housewife for many years, always cooking her husband dinner and dilligently assisting him in his experiments. The very moment she gets a little control, she uses her newfound freedom to lash out, get the upper hand on her husband and enact out her own little violent scenarios.
.
Though the film certainly falls short of its true potential, often seems unfocused and spends too much time showcasing lame pop acts at the nightclub (likely to appeal to a younger audience), this still has its merits. Especially noteworthy are the two lead performances; Karloff does a fine job engaging our sympathies, and he's matched every step of the way by Lacey in the showier role as the increasingly unhinged wife.
.
Director Reeves had previously made THE SHE-BEAST (1965), went on to his greatest glory a year after this one with WITCHFINDER GENERAL (1968) and died of an "accidental barbituate overdose" in 1969 right before production was to begin on THE OBLONG BOX (1969), a project that was handed over to director Gordon Hessler. He was just twenty-five years old. Production company Tigon Film Distributors also released CASTLE OF THE LIVING DEAD (1964), which was co-written by Reeves, who also served as second unit director on the film.
.
Allied Artists handled theatrical distribution here in the U.S., though it's never been officially released here on DVD.
★★1/2
Posted by The Bloody Pit of Horror at 3:16 AM No comments: