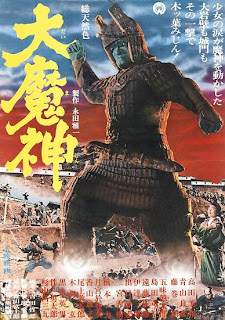 When it comes to Japanese monster movies, it's hard not to have visions of horribly-dubbed extras running around in a panic as some silly-looking giant man-in-a-rubbery-monster-suit rampages through a city. We've all seen at least a couple of these things before. They're good for a few dumb good laughs, right? Not so at all in this case. Hell, it might not actually be so in many or even most cases if this is any indicator of what these things are like when presented in pristine shape with the original soundtracks. Visually speaking, this movie is beautiful. The sets and art direction are top notch, the production values and cinematography are excellent and the performances are good. It's well-written, with an intriguing central premise and decent characters. And the special effects - mostly showcased during the final fifteen minutes though the film has no problem maintaining interest without them - have held up beautifully over the years. There were many times watching this where I was in awe at how smoothly they managed to blend the model work with the live actors. It's a hell of a lot more effective than most of today's overpriced CGI effects.
Set in 17th Century feudal Japan, DAIMAJIN (initially released in the U.S. as MAJIN, MONSTER OF TERROR) centers around a small village about to be overthrown by warlord / chamberlain Samanosuke (Yutaro Gomi) and his chief henchman Gunjuro (Tatsuo Endo). They and their brood murder kind samurai lord Hanabusa and his wife, and then attempt to murder their two young children; Tadafumi and Kosawa. Thankfully, vassal Kogenta (Jun Fujimaki) manages to get the kids out of the village before its too late. Kogenta and the kids seek refuge with Aunt Shinobu, an elderly high priestess who lives at the base of Mount Okimadini. Located at the mountain right in front of a huge waterfall sits a huge stone statue of Daimajin, a God worshipped by many in the village. Ten long years later, evil Samanosuke has turned the village into a slave camp where the villagers are little more than slaves who are whipped and killed if they dissent in any way. Kogenta, the Aunt and the now-teenage Tadafumi (Yoshihiko Aoyama) and Kosawa (Miwa Takada) are still hiding out in the woods. After both men are captured and tortured, Auntie is slain and Samanosuke's troops unsuccessfully attempt to demolish the statue, Kosawa pleads to the huge statue to avenge the village. She gets her wish as Daimajin comes to life, waves its arm to reveal a green monstrous face and beings its rampage of destruction.
Even though I'm still very much a novice when it comes to Japanese monster movies, what I got here wasn't at all what I was expecting. And I mean that in the very best of ways. Not only is the film extremely well made and highly entertaining, but it's also filled with brilliantly composed and downright beautiful shots; from the waterfall pouring over the mountainside to low angles peering up at a cloudy, sometimes red sky as the revived stone statue marches toward the village. Like many other films, this has been issued on both video and DVD under many labels, so you need to be careful about which version you get. It's hard to imagine any of them stacking up to the high quality disc released by AD Vision Films, which is a gorgeous print with English subs. Judging by stills I just looked at, the version released by Image Ent./Retromedia doesn't stack up anywhere near the ADV version quality wise.
It was made by Daiei Studios and was followed by two immediate sequels; THE RETURN OF MAJIN and THE WRATH OR MAJIN. All three films were shot back-to-back in 1966. Several box sets containing all three Daimajin titles are available.
★★★
Posted by The Bloody Pit of Horror at 3:40 PM 1 comment: 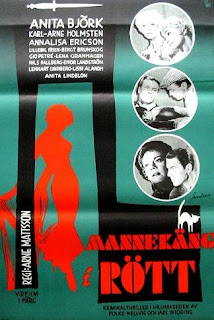 ...aka: Mannequin in Red

Directed by:
Arne Mattsson
This is the second of a five-part Swedish murder-mystery series, all of which were directed by Mattsson, starred Karl-Arne Holmsten as police detective John Hillman and were based on novels written by Folke Mellvig. The others in this series (none of which have been officially released in the U.S.) include THE LADY IN BLACK (1958), THE RIDER IN BLUE (1959), THE LADY IN WHITE (1962) and THE YELLOW CAR (1963). While I haven't seen any of the others to confirm whether or not they're "horror" enough to include on this blog, Mannequin certainly deserves a spot here for being an obvious precursor to both the German krimni (which were largely adapted works of Edgar Wallace) and Italian giallo movements. Speaking of giallo, this movie is surprisingly similar in numerous ways to Mario Bava's acclaimed BLOOD AND BLACK LACE (1964); so much so that BABL almost seems like a remake! And while Bava's movie (often cited as one of the first of its type) has the upper hand when it comes to visual style and depictions of on-screen violence, Mannequin is actually the better written and acted of the two. It's also visually sumptuous in its own right. Hilding Bladh's Eastmancolor cinematography is gorgeous and the art direction, lighting and imaginative costume designs are all outstanding.
Just as in BABL, the film is set in and around a colorful high fashion house full of designers, models and beauticians who cater to obnoxious and wealthy sophisticates. Both films open with the murder of a mysterious model and feature a killer who seems to be trying to conceal his/ her first crime with each new murder. The list of suspects is long. Very, very long. But don't worry, they're soon trimmed down. The fashion house itself is run by bitter, bitchy, wheelchair-bound Thyra Lennberg (Lillebil Ibsen), whose foster son Bobbie (Bengt Brunskog) is more interested in cars than clothes, so he's promptly written out of the will. Naturally, Bobbie's a bit upset about all this, especially when he learns that mum is planning on leaving everything to her snooty niece Gabriella (Gio Petré), who's more interested in a singing career than running the fashion house, and her playboy nephew Richard (Lennart Lindberg) instead. Each of the four characters are primary suspects in the first murder since each was in possession of a rare 17th Century dagger that was found in the victim's back.
Others thrown into the mix include put-upon designer Birgitta (Anita Björk), who is romantically involved with Richard and Bobbie, cosmetics counter girl Sonja (Lena Granhagen), who is romantically involved with one of the investigators, and a woman who goes by the name of 'Peter' (Lissi Alandh) and seems to be Gabrielle's lesbian lover. There's also a mysterious older woman lurking about carrying a cat that belonged to one of the victims. Detective Hillman is on the case and has some help from his wife Kaisa (Annalisa Ericson), who goes undercover as a model to see if she can uncover the killer. One character who you'll wish was 86'd is Det. Hillman's partner Freddy (Nills Hallberg), a stuttering buffoon who keeps popping up to provide completely unfunny "comic relief." His presence is a minor debit in this otherwise solidly made, sometimes quite suspenseful and very entertaining, if overlong (108 minutes), little thriller. The performances (especially from Björk and Ibsen) and camerawork are both very good, there's an eerie music score and the whole movie looks fantastic.
In addition to this series, director Mattson (a three-time nominee at Cannes) also made KORKARLEN (1958; aka THE PHANTOM CARRAIGE, a refilming of the 1921 silent classic of the same name), MORIANNA (1965), NIGHTMARE (1965), DIRTY FINGERS (1973) and MASK OF MURDER (1985). Most of those were never released in the United States.
★★★
Posted by The Bloody Pit of Horror at 10:45 AM 1 comment: 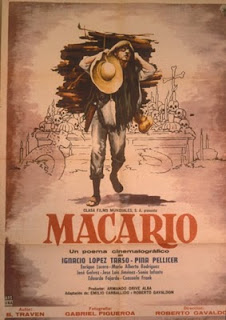 Hard-working, quiet lumberman Macario (Ignacio López Tarso) spends his days laboring in the forest to acquire enough firewood to sell to a local bakery so they can keep their ovens burning. His wife (Pina Pellicer) is a laundress. Their combined income is barely enough to feed their five small children. On the eve of "The Day of the Dead," as a special treat for Macario (who often times has to sacrifice his own dinner to his hungry, growing kids), his wife steals a turkey, roasts it and then secretly gives it to her husband to eat all by himself as he heads off to work one morning. Macario takes it into the forest, but as he sits down to eat, he's approached by three different men (one representing Satan, one representing God and one representing the Angel of Death i.e. The Grim Reaper) who all ask to share his turkey. The first, a mustached, smooth talker clad in black (José Gálvez), and the second, an ethereal older man dressed in white (José Luis Jiménez), are both politely refused. But Macario allows the third man (Enrique Lucero), who appears to be a fellow peasant who seems to have fallen on hard times himself but is actually the human guise of Death itself, to share his meal.
Afterward, Death offers Macario a special gift to pay him back. He taps the ground and a water spring gushes forth. He fills Macario's flask with water has the special ability to cure some (not all) of those who are ill. The peasant also informs him that he will appear (in ghostly, transluscent form) by the bedside of each person he hopes to cure. If he's standing at the foot of the bed, it's OK to revive them with the water. If not, the person's time to die has come and nothing can be done.
Macario first uses the water to revive his son after he falls in the well. Rumor quickly spreads around the village about Macario's special abilities and he's asked to help wealthy Don Ramiro (Mario Alberto Rodríguez) to cure his dying wife (Sonia Infante). After successfully curing her, Don Ramiro and Macario strike up a partnership and wealthy people from all over the country begin stopping by their inn for the miracle cure. A jealous local doctor whose business is taking a hit decides to tip off the Catholic moral authorities, who promptly send a bunch of inquisitioners into town to do their own investigation. Despite the claims of those he helped (who believe he's doing God's work), the witch hunters brand Macario a sorcerer, lock him up in a cell/torture dungeon and threaten to either cut out his tongue or burn him at the stake. The only way he may be able to save his wife is by healing the dying son of a nobleman.
Based on a novel by mysterious and elusive writer B. Traven (who also wrote THE TREASURE OF THE SIERRA MADRE), this beautifully filmed (by Gabriel Figueroa), hauntingly atmospheric allegorical tale is dramatically sound (with a well-paced storyline and a quietly compelling central character), very well-acted by the entire cast, humorous and charming at times (though topped off with a tragic ending) and has enough fantasy and horror touches (the wily presence of Satan, the witch hunting/torture chamber sequences, the "Day of the Dead" skull aesthetic, Death's foggy, cavernous home filled with candles...) for me to include it here on this blog. The cast also includes Eduardo Fajardo, José Dupeyrón and Alfredo Wally Barrón.
It was the first Mexican film to be nominated for an Academy Award as Best Foreign Language Film (it lost to Bergman's THE VIRGIN SPRING) and was also nominated for the Golden Palm at the Cannes Film Festival (where it lost to Fellini's LA DOLCE VITA).
★★★
Posted by The Bloody Pit of Horror at 9:00 AM 3 comments: