Who pushed Helen (Gioia Desideri) over the staircase railing? That's the main question in this flashback-filled giallo. After losing both his father and wife some time earlier, Oliver Bromfield (José Antonio Amor) decides to move back into his familial home; a huge mansion atop a mountain and five miles from the nearest village. He's bringing along his new wife Ruth (Daniela Giordano) and warns her if she interacts with the locals to not pay any attention to what they have to say about the family. Upon arrival, they're greeted by Oliver's stepmother / the father's second wife, Sarah (Nuria Torray), whom Ruth immediately is leery of. Must have been the passionate way she kissed her husband on the cheek. Maid Clara (Alicia Tomás) is friendly enough but seems a little apprehensive about answering any questions about the family. Once glum sister Jenny (Teresa Gimpera) returns home from visiting Oliver's deceased first wife Helen's grave, she rushes right up the stairs and doesn't even say hello to Ruth. So much for a warm welcome. Things only get worse from there, not only for Ruth but for the viewer as well.

The Bromfield home is filled with depression, desperation, bitterness, mental illness and a few dark secrets. Sultry Sarah is deeply in love with Oliver and makes no qualms about it; attempting to seduce him any chance she gets. When that doesn't work, she vicariously gets her kicks spying on Oliver and Ruth's intimate moments through a hole in the wall that looks right through a clock and into their bedroom. Sullen Jenny hates her brother for moving on so quickly and seems to miss the dead first wife a lot more than he does. When she's not spearing butterflies to add to her collection, she's reminiscing about poor dead Helen because she was in love with her and the two may have even had a lesbian affair. Once a drunken Oliver caught wind of what was going on between the two, a fight ensued (“You're disgusting!”) and that's when poor Helen went over the edge. Or at least that's what Oliver remembers happening.

Worried about her husband's sanity if he stays in the house, Ruth decides to look into matters and goes to see Bromfield family physician Dr. J.F. Roberts (Carlo Gentili), who informs her that Helen didn't suffer from dizzy spells at all (what everyone in the Bromfield family said caused her fall). Oliver claims she may have been dizzy because she was pregnant, but it's revealed she couldn't bear children because of a medical condition. Ruth then begins to doubt her own sanity when she spills a glass of milk and the kitten who laps it up dies only to miraculously come back to life. A similar episode occurs about missing car keys that aren't really missing. Paranoia becomes the order of the day as Ruth begins doubting what she sees and everyone around her and what their intentions may be. She invites her Uncle Edgar (Osvaldo Genazzani) to the home to stay for a few days. Edgar turns out to actually be a private investigator she's hired to help her get to the bottom of things.

Pretty much everyone has a possible motive to have knocked off Helen, who's shown to be something of a manipulative bitch in the brief flashbacks. Due to his former wife's taunting and refusal to sleep with him (“You're a lousy drunk!”), Oliver had to seek out psychiatric treatment for severe alcoholism. And it's a simple case of unrequited love for the two ladies. Stepmom Sarah has desired Oliver since he was 14 and was never able to have him because of her own husband and then his two wives. Jenny, who's been known to get off on torturing animals (hence the current butterfly obsession), was in love with the woman her husband married. There's lots of eavesdropping, peeping in windows and through doorways, twisting doorknobs and lying. Eventually someone slaps on a pair of black leather gloves, grabs a knife and gets to work killing everyone off. Throw a sinister groundskeeper into the mix and you've got the formula down for an acceptable little giallo, right? Wrong!

This isn't just bad, it's downright awful. The director, who is best known for spaghetti westerns, comedies and soft-core sex movies, proves to have absolutely zero talent for building suspense, generating terror or putting together an interesting mystery where you actually feel invested in what's happening. The pacing of this one is insufferable. The killing spree (all neck slashings with blood clearly squirting out of a prop knife) doesn't even begin until the final twenty minutes and the murder sequences themselves are so devoid of filmmaking craft and ineptly staged they have no impact whatsoever. Worse yet, the entire first hour is filled with shots of glum, uninteresting characters posturing and trying to look suspicious while chain-smoking cigarettes and talking about the most mundane things imaginable. Why did you go on a walk? Why were you in your bedroom? Why were you in my bedroom? Why were you in the library? Why were you outside? Why did you go into town? Why do you have your breakfast in the kitchen? After a straight hour of this empty blather, most viewers aren't going to give a shit who did what and why. I know I sure didn't. 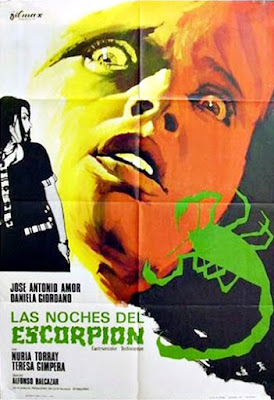 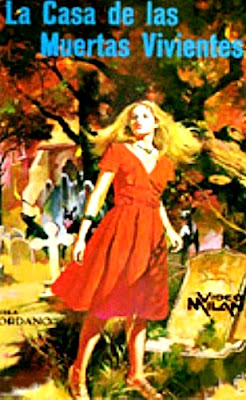 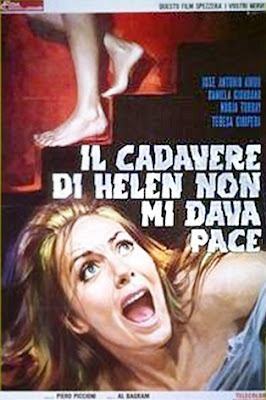 The only interesting thing going on here is that this somehow seems to have influenced certain aspects of Psycho II (1983). There are numerous scenes of voyeurism from a hidden peephole, bloody towels used to clean up a murder scene being stuffed into a water tank (in Psycho II it's the toilet but essentially the same thing), a body discovered beneath a pile of coal in the basement and other similarities. The script is based on a story co-written by the director and José Ramón Larraz. A few nicely-composed / lit shots and a decent score from Piero Piccioni are all that save it from my lowest possible rating. It's really that bad. 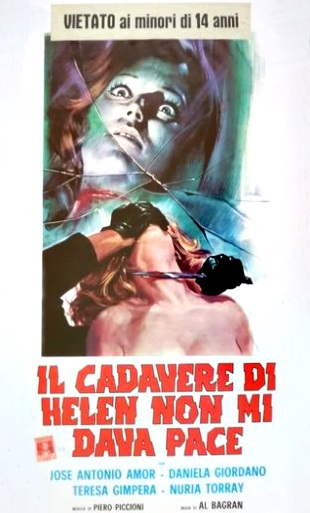 Never released theatrically or officially on home video in the U.S. The Italian version (credited to “Al Bagran”) titled either Una tomba aperta... una bara vuota ("An Open Tomb... An Empty Coffin") or Il cadavere di Helen non mi dava pace ("Helen Is Not Resting in Peace") has a lot more nudity than the Spanish version, La casa de las muertas vivientes ("The House of the Living Dead"), which has no nudity. I ended up with a copy of the latter, which runs 82 minutes. The Italian print is 5 minutes longer and includes a few additional scenes of dialogue as well (gee, just what it needed!) but you have to sacrifice the better picture quality to see it. Ditto for a rare English-dubbed print floating around out there.

★
Posted by The Bloody Pit of Horror at 7:51 PM No comments: