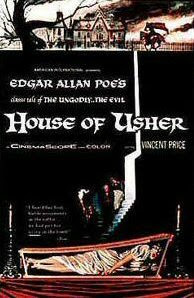 Directed by:
Roger Corman
By the late 50s, Roger Corman had already established himself as a person capable of making imaginative and amusing genre pictures that could be produced cheaply and yet always turn a profit. Now it was him time to establish himself as a serious director. USHER was his first Poe film out of an eventual eight-part series of films (well, one of them is actually based on Lovecraft, but we'll ignore that...) and remains one of the best adaptations thus far of the familiar story. In my estimation it is only rivaled by Epstein's wonderfully gloomy 1928 silent version. This was both a critical and commercial success in its day on a meager $125,000 budget. Vincent Price give a superb performance as Roderick Usher, an eternally sick, tortured soul who lives in a crumbling castle with his sister Madeline (Myrna Fahey) and faithful butler Bristol (nicely etched by Harry Ellerbe). When handsome Philip Winthrop (handsome, but otherwise bland, Mark Damon in a role that helped him snag a "Most Promising Actor" award at the Golden Globes) shows up to take Madeline away, Roderick's incestuous feelings come to surface and the terror begins. Highlights include Damon's colorful nightmare sequence and Price's amusing explanation of the Usher family history.

It's intelligent, subtle and effective, with disturbing and daring subtext, good sets and costumes. Excellent contributions from scriptwriter Richard Matheson, composer Les Baxter, cameraman Floyd Crosby and art director Daniel Haller are all united by Corman's smart, stylish, fluent direction. Truly deserving of it's reputation as horror classic. Also released as THE FALL OF THE HOUSE OF USHER.
Other films in the Poe series include: PIT AND THE PENDULUM (1961), PREMATURE BURIAL (1962), TALES OF TERROR (1962), THE HAUNTED PALACE (1963), THE RAVEN (1963) and THE MASQUE OF THE RED DEATH (1964) and THE TOMB OF LIGEIA (1964).
★★★1/2
Posted by The Bloody Pit of Horror at 4:07 AM