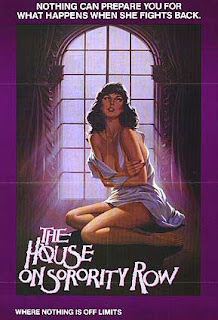 A lot of people will say this is a professional, creepy and well made horror movie. I don't know what they were smoking, but after viewing this two times in a row to see what the big fuss was about, I am convinced it's actually below average when compared to dozens of other slashers to emerge in the late 70s/early 80s. It's a very silly little film with myriad production woes (convoluted script, idiotic character actions, laughable dialogue, uneven acting, continuity errors, choppy editing) and not even enough gore or nudity for it to coast alone on exploitation value alone. And yes, I'm well aware that one must put sense and logic on the backburner when viewing films of this sub-genre; slasher movies set in sorority houses aren't exactly supposed to be high art. This one just seemed pointless. It lacked the tension, scares and suspense of something like BLACK CHRISTMAS (1974) and lacked the blood, gratuitous nudity, goofy camp sensibilities [and self-aware humor] of something as 'low-grade' as SORORITY HOUSE MASSACRE 2 (1990). I'd recommend either of those films any day over this by-the-numbers effort. It's not completely terrible, but there's nothing memorable about it either.
Mrs. Slater (Lois Kelso Hunt, whose performance was dubbed because the producers found her voice not menacing enough) is one mean sorority house mother. She's bitchy, bitter, doesn't allow parties, doesn't want boys coming over and wields a cane with a razor sharp blade on the end (!) Seven of her girls (Kate McNeil as Katherine, the token nice girl with a conscience, Eileen Davidson as Vicki, the token 'bad' girl who also provides the token brief nude scene, and five others who don't really have personalities), are on the verge of graduating and decide to go against house mama's wishes and throw a final bash at the home. Before the festivities begin, they also decide to play a cruel prank on Mrs. Slater to repay her for four years of nastiness. Even though the girls are smart enough to complete their degrees, they aren't smart enough to not use a real gun during the prank. Make that a real loaded gun... You can pretty much figure out what's gonna happen before they do as the gun accidentally goes off, Mrs. Slater is killed, the girls panic, wrap the body up and decide to sink it in a cruddy backyard pool (full of algae and green water so you can't see to the bottom). They decide to continue on with the party anyway, and someone shows up to kill them all off one by one. Mrs. Slater's body also turns up missing. Did she survive the gunshot and now wants revenge or could it have something to do with the opening blue-tinted flashback dealing with a woman going through a rather traumatic labor?
It all starts well enough. The opening sequence is stylish, the introduction of the girls is fairly well done and the production values and music score are both good, but as soon as the body count starts to rise, it becomes a nonsensical, muddled mess. Let me tell you right now, nothing stops these ladies from wandering off by themselves so they can get killed. They know Mrs. Slater may still be alive and several of their friends are already missing, but oh well! They need some quiet time alone in their rooms. They need to run away from everyone else. They need to go into the cellar alone to turn off the pool lights. They need to go by themselves to get the van/car/whatever... Many slasher movies function this way to ensure a high body count. However I can't think of many that do this at least a dozen occasions, for such idiotic reasons and for so little payoff (minimal gore; unoriginal murders), just to keep the ball rolling.

The lowest depths of stupidity are reached when sister Jeanie (Robin Meloy) is attacked but manages to make it back into the house bloody and scared. She locks the door and finds Katherine, who then promptly leaves Jeanie sitting there by herself for no good reason despite the fact she was attacked right outside the freaking door. A second later the killer busts in and Jeanie runs upstairs into the bathroom to hide in a stall. She throws up a little bit and then actually, get this, flushes the toilet (!!) Ugh, I can't go on.
★1/2
Posted by The Bloody Pit of Horror at 11:57 AM