Clumsy, badly scripted, Roger Corman-produced space horror is often written off as an ALIEN clone when in fact it has much more in common with EVENT HORIZON, a film that wouldn't even be made until a decade and a half later. Hard to believe that this clunker would go on to be the primary influence behind one of the most popular and well-regarded sci-fi/ horror hybrids of the '90s, but there are way too many similarities between the two not to acknowledge it here. Ten space travelers (a commander, pilot, telepath, cook, etc.) head off to a distant planet to see what became of another crew who disappeared. There they find the first explorers dead in the wreckage of their ship and then make the mistake of entering an ancient structure, which somehow has the power to turn there's worst nightmares into reality. One by one, they latest batch of visitors are killed off in a variety of different ways (and a variety of different beings) until the strongest of the bunch faces his destiny as the building's red-glow faced "New Master."
.
Edward Albert (as the level-headed Cabren) leads a cast that includes Erin Moran (Happy Days) as a whiny "bio-sensor," Sid Haig as a crystal-obsessed, near-mute guy armed with throwing stars, Robert Englund, who gets to battle a mirror image of himself before mysteriously disappearing from the film, Ray Walston (FAST TIMES AT RIDGEMONT HIGH's Mr. Hand and TV's My Favorite Martian), Zalman King (best known for his annoyingly "arty" soft core cable erotica - Red Shoes Diaries, etc.) and Grace Zabriskie, who apparently was being typecast as a nut even at this early stage in her career. Interesting cast, but every single one of them seems completely lost here. The characterization is nonexistent, the dialogue is bad, hilariously overwrought takes were accepted and the character interactions are awkwardly done.
Now this film does have a few very good things going for it. For starters, the art direction, sets and miniature work are all surprisingly solid. This does manages to adequately create that type of other-worldly feel crucial to a film like this. Cinematography is decent, if a bit overly dark at times. There are also some great old school special effects and a nice variety of creatures on display. Everyone's favorite bit seems to when the shapely blonde pilot (Taaffe O'Connell) gets sexually ravaged by a giant space slug. There's also a dismembered living hand, a black creature with large fangs and glowing eyes, some suction cup tentacles and an exploding head to keep you interested.
Quite a few "names" are in the credits. James Cameron (who'd go on to direct ALIENS five years later) was the second unit director and one of two credited production designers; his ALIENS co-star Bill Paxton also worked here as a set dresser. Production manage Aaron Lipstadt would make the great sci-fi sleep ANDROID (1982), which starred Don Opper, the production coordinator here. Future directors Tony Randel (HELLBOUND: HELLRAISER II), David DeCoteau (CREEPOZOIDS), Donald Jackson (HELL COMES TO FROGTOWN), Ernest D. Farino (STEEL AND LACE), Mary Ann Fisher (LORDS OF THE DEEP) and Rupert Harvey (CRITTERS 4) also worked on it.
Popular enough during its day to prompt a sequel: FORBIDDEN WORLD (1982).
★★
Posted by The Bloody Pit of Horror at 6:49 PM No comments: 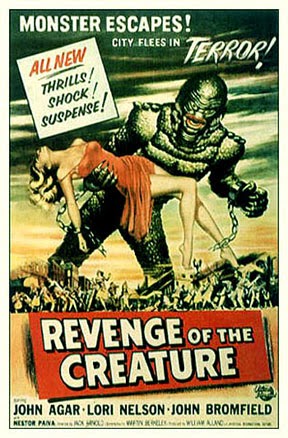 
Immediate sequel to the Jack Arnold-directed Universal hit Creature from the Black Lagoon (1954) finds a new Amazonian expedition, headed by marine biologist Joe Hayes (John Bromfield), capturing the Gill-Man and transporting him to Florida. During his stint in the tourist-friendly Sunshine State, the dreaded sea beast finds himself chained to the bottom of a large glass aquarium at Marineland and given a daily ration of fish from Professor Clete Ferguson (John Agar) and female ichthyologist Helen Dobson (Lori Nelson), who's anything but icky. Clete and his assistant become romantically involved and attempt to tame the beast's savage instincts; conditioning it with commands of "No" followed by a shock of electricity when it gets rowdy. Their technique seems to be working for awhile but the Gill-Man is antagonized to the point where he's able to break his chains and escape into the ocean. Everyone assumes he has headed back down to his home turf in Brazil, but the creature is as smitten as the professor and decides to stick around Florida long enough to get his webbed claws on the lovely Ms. Dobson.

The reputation of this sequel, which was shot in 3-D like the first, took a hit when it was ridiculed on the 9th season of MST3K. Regardless, it's really not a bad little continuation of the series and ended up grossing more than the first film in theaters, leading to yet another sequel - THE CREATURE WALKS AMONG US (1956) - the following year. There's little action during the first half, the film lacks the creepy jungle atmosphere of the first and the acting's a bit stiff from the principals, but the film actually does improve as it goes along. The creature itself is seen more this time out and because of its captivity and the fact its out of its element during the duration of the movie, we actually start to pity the poor thing after awhile.

Nestor Paiva reprises his role as the boat captain during the first scenes, as does Ricou Browning (who plays the creature during the swimming scenes) and there are uncredited bit parts played by Brett Halsey, as a teen killed by the Gill-Man, and Clint Eastwood (making his film debut), as a forgetful lab technician.