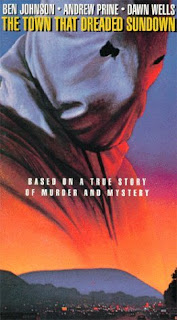 Directed by:
Charles B. Pierce
Based on a true incident (though apparently a mostly fictitious account), this chronicles the plight of the small town of Texarkana to stave off the murder spree of "The Phantom Killer" in the late 1940s. The hooded maniac (an obvious inspiration for the look of Jason in FRIDAY THE 13TH, PART II) shoots teenagers dead and, in one scene, ties a girl to a tree and stabs her death with a knife fastened on the end of a trombone. Investigating cops headed by Ben Johnson and Andrew Prine are dumbfounded; in fact, this real-life killer was never caught. Goofy music, light comic relief and redundant narration don't really seem to fit in with the rest of the film, but good regional atmosphere, a decent cast and an interesting story partially make up for it. Dawn Wells (Mary Anne from "Gilligan's Island") does especially good as a near victim who keeps going, even after being shot in the face! Director/producer Pierce (who also appears in a supporting role as a dimwitted cop) is best known for the BOGGY CREEK films and also made the haunted house flick THE EVICTORS.
★★1/2
Posted by The Bloody Pit of Horror at 2:10 AM