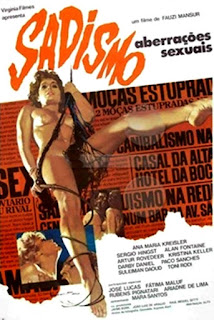 
Joanna (Ana Maria Kreisler) goes out to a nightclub and stumbles upon her husband kissing another woman. He then decides to rub salt in the wound by turning around and dancing with his mistress and grabbing her ass right in front of her. Joanna whips out a gun, shoots him in the chest, panics, runs out into the street and is struck down by a car. Five months later (your guess is as good as mine how she somehow managed to avoid going to prison), she keeps waking up in bed screaming and drenched in sweat from her nightmares. Because of the accident, Joanna is confined to a wheelchair. She's demanding of her live-in helper / assistant Martinha (Cristina Keller) but spends most of her time alone flipping through sleazy tabloid newspapers. Since her reading materials are almost always negative, sensationalist and / or horrific, and involve things like killers, rapists and sadists, her sexual fantasies start reflecting that.

After reading about a cannibal killer, Joanna then has a fantasy about a man having sex with a woman, which takes an ugly turn afterward when he bites off her vulva (!) and then spits it out on her stomach. He then carries her to the kitchen, cuts off her breast, throws it in a skillet, cooks it and eats it (!!) Next, she envisions other people having sex and of her strung up in a net being hoisted up and lowered over and over again. Someone stalks outside her home and the same man may be the person who keeps calling her on the phone and threatening her. Joanna eventually is up and walking again. She meets an injured homeless man named Mano Juan (Arthur Roveder) in the park and decides to take him home and nurse him back to health over the course of a few months. I'm sure you can imagine what all that entails.

Once Mano Juan is functioning again, Joanna learns he's a potentially dangerous criminal or perhaps one of the Chilean guerrillas she keeps reading about in the papers. Pretty soon, the police are swarming her house and then dragging him away. She's alone yet again but he shows up out of the blue at her doorstep 6 months later. The police return just in time for a bloody shootout. A recurring character in her dreams is an older man who turns out to be Dr. Gerson (Sérgio Hingst), her psychiatrist. Concerned about Joanna's mental state, Martinha and her boyfriend go to him for help. This is all set up to where only some of it may actually be happening, none of it is actually happening or it's a combination of the two.

Conceptually, this has a very interesting central idea: How the consistent intake of negative news affects one with an already-fragile mental state who spends most of their time closed off from the rest of the world. Of course there's so much sex crammed in that this idea isn't fully fleshed out, but at least some effort was put into trying to make this more than it had to be. What hurts this most in its current state is that all that's currently available is a shoddy VHS copy. A number of the scenes were shot in hazy soft focus in low lighting, which simply doesn't translate over well to video as the scenes end up looking too dark and blurry / out of focus. A cleaned-up print may merit another 1/2 star but I wouldn't hold my breath waiting for a remastered DVD version of something like this either.