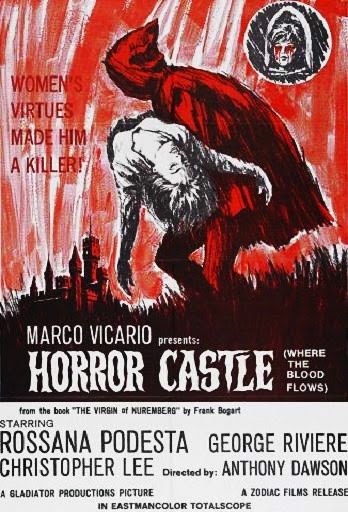 
Max Hunter (George Riviere) and his wife Mary (Rossana Podesta) arrive in Germany from the U.S. to stay in a huge ancestral castle formerly occupied by Max's dead father, who presumably passed away during WWII. The home comes equipped with a butler named Fritz, a Mrs. Danvers-like maid named Marta (played by Anny Degli Uberti), a few servant girls and the mysterious, facially scarred Erich (Christopher Lee), who was a former colleague of the father's and runs a museum out of the castle dedicated to showcasing various torture devices. Their very first night there, Mary is awakened by a thunderstorm and screaming. She goes downstairs and finds a freshly-killed woman inside an iron maiden type contraption called a "Virgin of Nuremberg;" a sarcophagus with strategically placed spikes that gouge out the eyes when the door is closed.

Mary passes out and awakens the next day only to discover the body is missing and no one believes her story, despite the fact one of the servants has turned up missing. Everyone around her seems like they're hiding something, which only feeds her paranoia. The husband promptly goes away on business and a hooded figure tries to break into Mary's room later that night. She stabs him on the hand, escapes and later ends up catching the same figure kidnapping a woman (Lucile Saint-Simon) and dragging her to a torture chamber located underneath the castle. There, the woman has a cage strapped to her face, where a hungry rat is unleashed from the other side to gnaw off part of her nose! What's going on? Who's the cloaked figure? Why is he killing women? Why is an American FBI agent (played by Jim Dolen) lurking about? And why is everyone in the house acting so damn sneaky? Everything's conveniently wrapped up with some WWII flashbacks, which mixes newly filmed scenes with stock footage.

The art direction, sets and Riccardo Pallottini's lush color cinematography are all ace in this great-looking, nicely done Gothic horror. The pacing is much brisker than many similar films from the period and the film never really seems to drag. It's also quite grisly at times. There are some exciting moments in here too, such as when one of the men find themselves in an enclosed room quickly filling with water, while Margheriti is able to showcase a nice visual eye in scenes such as when our heroine is frantically running around outside and we see flashes of the trees illuminated by flashes of red or orange. Though the dubbing and dialogue are a bit annoying at times, the storyline itself is both fun and holds some surprise. The wrap-up is fairly well-done, and the unveiling of the identity of the hooded killer is one of those great Phantom of the Opera-esque horror moments worth waiting for. One thing I didn't care much for was Riz Ortolani's overbearing score, which is sometimes inappropriately jazzy, especially at the start.

It was based on a novel by Frank Bogart, which was adapted by Margheriti (who also did the special effects), Ernesto Gastaldi and Edmond T. Greville, (who directed the 1960 version of The Hands of Orlac which also featured Lee and Saint-Simon). It was originally released in the U.S. in a cut version titled Horror Castle. The 2004 DVD release from Shriek Show (under the original title The Virgin of Nuremberg) looks great and is uncut, though Lee has been dubbed by another actor even in this English-language version.