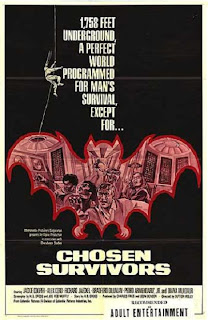 Directed by:
Sutton Roley
I was genuinely excited about seeing this one based solely on the plot overview: A handful of post nuke survivors hole up in some futuristic bunker a thousand+ feet beneath the Earth's surface and must face off against blood-hungry vampire bats! What's not to love there? Unfortunately, this film never realizes its full potential. So what went wrong? Primarily the screenplay. The dialogue and character arcs/interactions are not only hokey in the extreme, but predictable. The whole thing has a "TV Movie of the Week" feel to it. Even worse, it instantly brings to mind one of those cornball Irwin Allen flicks from the era. You know, the ones where a star-studded cast runs around trying to avoid getting killed by towering infernos, flood waters, killer bees, sinking ships and the like. They're usually referred to as disaster movies, which not only refers to the plot but also the execution. This one is really no different. There's a sci-fi/horror bent, but it's still business as usual. Only the cast isn't quite up to par.
Things begin when ten drugged people; several scientists, a female politician, a jerk corporate fat cat, a famous athlete, etc., are escorted out of a helicopter by some soldiers somewhere in the desert and thrown into an elevator. The elevator goes deep underground, opens its doors and then promptly disables itself. The ten trapped people wander out to find themselves in a futuristic military bunker fully equipped to sustain their number for upwards of five years. Television sets play a pre-recorded message from a female spokesperson, who informs them that nuclear war has broken out on the surface and they are amongst the chosen few selected by the U.S. government to help carry on the human species. So far, so intriguing. I actually really liked the movie up until this point. Unfortunately, as the chosen survivors start settling in and tensions start bubbling to the surface as a swarm of bloodsucking bats somehow find their way into the installation, the movie really seems to lose its way.
As some have done, I could say this movie has an identity crisis, but that's not the problem here. The problem is poorly-written dialogue, bad continuity and thinly-drawn, cliched, unlikable and uninteresting characters. Just a few days in the bunker, people are already starting to pair off. Unfortunately, we don't get to see them in any romantic scenario beforehand. The film just raggedly cuts to two people lying in bed together and we the viewers are kind of like "Huh?" None of the characters - as written or performed - invokes much interest. There's really no solid protagonist here and no central focal point. There are also no real ideas present nor are there any kind of insights into human nature during times of stress. Naturally, the movie pulls a twist out of its bag near the end, but it's poorly telegraphed in advance.
Despite my negative comments, the movie is still mildly watchable if you're not expecting much. There's a certain low-budget efficiency to both the sets and lighting design that gives off the appropriate futuristic vibe. The idea of using TV monitors to track progess on the surface is a good one and the general premise is just intriguing enough to keep one wondering how things are going to pan out. Some of the visual effects have dated badly, but scenes utilizing real bats are fairly effective. There are also some familiar faces in the cast, though none of them are given a chance to make an impression here... at least not a good one. Former child star Jackie Cooper has the thankless role of an obnoxious financial big wig who can't handle the stress and at one point attempts to rape one of the females (Barbara Babcock). Richard Jaeckel (GRIZZLY) is an army electronics expert whose face turns lobster red any time he's forced to emote, Lincoln Kilpatrick is a washed-up athelete who eventually puts his skills to use climbing up the elevator shaft, Alex Cord is - uh - I can't even remember and Diana Muldaur (THE OTHER) is her usual sullen self as a congresswoman. Pedro Armendariz Jr. (who was a star in Mexico, where this was filmed) is also on board and has nothing to do but die and personal favorite Bradford Dillman plays a geeky scientist and gets some practice in the killer animal subgenre. He'd go on to face killer cockroaches from hell in BUG (1975), killer bees in THE SWARM (1978) and killer piranha in (you guessed it!) PIRANHA (1978).
Long out of circulation, this was finally revived by 20th Century Fox, who paired it with THE EARTH DIES SCREAMING (1964) for the 2007 DVD release. It's part of their "Midnite Movies" line. Nice looking print, at least.
★★
Posted by The Bloody Pit of Horror at 9:17 PM 1 comment: