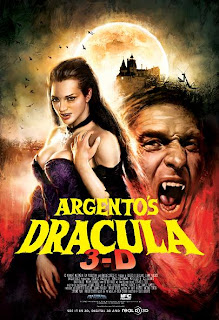 
Throughout the 70s and 80s, Dario Argento rose to the forefront of the genre with such strong offerings as The Bird with the Crystal Plumage (1970), Deep Red (1975), Suspiria (1977) and Phenomena (1985). Some even went so far as to dub him "The Italian Hitchcock." Along with the strong body of work came a dedicated and loyal fan base who appreciated the director's colorful visual flair, elaborate camerawork and creative bloodshed. Though many would agree that the quality of Argento's output began to take a turn for the worse immediately after the box office flop Opera (1987), the shit didn't really hit the fan until about the turn of the century with the release of The Phantom of the Opera (1998); a gore-drenched, fairly well-produced yet laughable take on the Gaston Leroux novel. Subsequent highly-uneven films throughout the 2000s polarized fans even more. Some felt alienated or betrayed; even embarrassed. Many have since given up on him entirely and claim he's forever lost his touch. Personally, I've always found at least something to enjoy in most of these later, lesser films. I readily admit to being entertained by the likes of The Card Player (2004) and Mother of Tears (2007), while simultaneously realizing this clearly isn't Argento at his best. However, even I - as a huge fan, though never a blindly loyal one - cannot defend his latest release. This is absolutely dire. Rock bottom. Not only is the whole thing utterly pointless, it's also amateurishly directed, horribly written and acted and, worst of all, incredibly boring... Well, boring when it isn't being unintentionally comic.

For some unfathomable reason, it took four different writers (not including Stoker) to conceive this tired rehash. After having a secret midnight rendezvous with her boyfriend, Tania (Miriam Giovanelli) is chased through the woods by a laugh-inducing cartoon owl that transforms into Count Dracula (Thomas Kretschmann). He takes a bite and then drags her back to his castle home to be his new bride. Jonathan Harker (Unax Ugalde) then arrives in the village via train to take up a position as Dracula's librarian. After a few weird occurrences there, he finds himself being bitten and promptly disappears. Harker's wife Mina (Marta Gastini) arrives a few days later looking for him and reunites with her old friend Lucy (Asia Argento). Dracula shows up and bites Lucy. She gets sick, dies and returns as a vampire just in time for the arrival of Van Helsing (Rutger Hauer). After Lucy is set ablaze and reduced to embers, Mina (the reincarnation of the Count's former love) finds herself under Dracula's spell. Van Helsing and some priest (who was just in one earlier scene) then descend on Dracula's castle for the final showdown. Words cannot adequately describe just how poorly developed and blank each and every character in this film is. None of them have an ounce of depth. There's nothing to make them feel alive and nothing to make us care about anything going on in this overdone story. Furthermore, there's zero regard for pacing, it refuses to find a rhythm and there's a complete absence of dramatic drive to push the story forward. It just all falls flat.

One of Argento's main weaknesses, evident even in his best work, is his complete disregard for scripts and actors. While he used to camouflage this with his trademark style, he's completely unable to do so here thanks to the ordinary high def digital photography. Kretschmann (previously in Argento's The Stendhal Syndrome [1996]) makes for a dashing-looking count, and at least attempts to make the Count seductive and menacing, but the ridiculously poor dialogue and non-existent chemistry with his wooden co-stars completely foils his efforts. Not that I'm blaming his co-stars per se, as they have absolutely nothing to work with themselves. Gastini is cute as Mina, and I could see her being appealing in something else, but the romantic scenes between her and Kretschmann are awkward, forced and completely ineffectual. Asia (who can be quite good if given proper material and direction) gives an abysmal performance and seems to be here only so daddy can fulfill his desire to film her topless (which he's been doing in nearly film of his since 1993's Trauma). Most disappointing of all is Hauer, who acts like he'd rather be doing something - anything - other than playing Van Helsing in this movie. For some reason, most of the actors maw over their stale, lifeless dialogue in an oddly unnatural way, with frequent and unnecessary pauses between words for no reason whatsoever. What is usually relegated to the outtake reel has been allowed to pass muster in the finished product. Hell, I'd be scared to see what takes actually got rejected!

It probably doesn't help matters that Stoker's novel has been filmed so many times over the years that it's almost impossible to invigorate this tired material. Even with a huge Hollywood budget at his disposal, Francis Ford Coppola was only able to deliver a visually astounding adaptation, though even it was dramatically flaccid (having a walking lobotomy like Keanu Reeves in the cast didn't help matters). And that was twenty years ago. While Argento's take on the story (budgeted at nearly 8 million U.S. dollars, which is neither huge nor peanuts) has the appropriate period costumes and art direction, that's about it as far as the pluses are concerned. The photography (courtesy of the talented Luciano Tovoli) is merely OK though thoroughly unimaginative; this looks just like every other medium-budget digitally-shot video out there. The score fluctuates from appropriate ethereal music to a track that sounds borrowed from some 1950s sci-fi flick. There's depressing heavy reliance on CGI for the majority of the special effects and silly-looking beetles, birds, fire, a giant praying mantis (don't ask) and other fx are a constant source of laughs. Shots of the castle and train station look like more like desktop wallpaper than locations. Hell, I don't even think they used a single real wooden stake or any actual fake blood in this entire film. Argento can't even resist ripping himself off here. There are images of flies threateningly swarming outside a window (like in Phenomena), a slow-motion shot of a cartoon bullet traveling through a mouth (just like in Stendhal) and other, shall we say, self-referential moments.

With this, one hopes the legend of Dracula can finally be put to rest for good or, at the very least, a decade or so. There's really no point in re-filming this same story over and over and over again. The addition of 3D effects do nothing to make it feel fresh or exciting, especially when the rest of the film is otherwise terrible. And, sad to say it as a fan, but if this is the best he can do, Argento should probably consider taking a little rest himself. Some directors are excellent storytellers who can make impressive films on small budgets, but Argento isn't, and never really was, one of those people. His visions require a good deal of money and I seriously doubt anyone is going to be giving him much green to make a movie at this point in his career. Trying to skirt costs utilizing newer technology have done nothing but neuter him, and many of his later films have done nothing but dampen his once very good reputation.