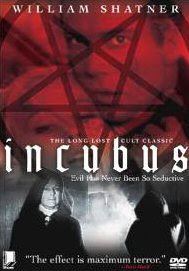 
Made by some of the same folks who worked on the great Outer Limits television series, this little-known gem (shot entirely in Esperanto, a failed language conceived to become a universal dialect many years ago) is definitely one-of-a-kind and worth checking out. William Shatner stars as war vet and all-around good and decent guy who lives with his sister (some Freudian implications are present) in a nameless and nearly-vacant coastal village. He is briefly led astray by a seductive, blonde devil-worshipper (Allyson Ames) under false pretenses... he thinks it's for the mutual attraction and she is basically plotting to kill him and deliver another soul over to Satan. The re-mastering job is a crystal clear b/w print, gorgeously shot by Conrad L. Hall (AMERICAN BEAUTY) around picturesque Big Sur locations. Director Leslie Stevens achieves some amazing shots, throws in some great camera-work and the films has faint echoes of CARNIVAL OF SOULS and many Bava films. The plotting (Shatner falling in love in the course of an afternoon and some heavy-handed religious themes) is often at odds with the is lyrical and poetic tone of the film, but it has many standout sequences (including a winged demon seen only in shadow, a solar eclipse, the human "incubus" rising from the grave, an opening murder of the succubus drowning a drunken man in the ocean...) to recommend it.


For nearly 30 years, this film was thought to be lost; the original negatives and prints were senselessly tossed out by the film lab entrusted with their preservation, and the filmmakers gave up hope that any other copies existed. But in the mid-1990s, producer Anthony M. Taylor learned that the Cinémathèque Française (located in Paris, France) still had a copy of the film in their archives and had a digital re-mastering of the film done.

I finally got to see this last night on TCM and it defied my expectations that it would pretty much be a (unintentional) farce... turns out it's actually pretty moody and creepy in spots.
For no good reason it reminded me, just a bit, of 'Dementia/Daughter of Horror'... which doesn't seem like it would be a compliment but it is.