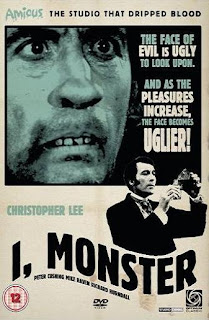 ...aka: Monster, The
...aka: Monster of London, The
...aka: True Story of Doctor Jekyll, The
Directed by:
Stephen Weeks
Most of the names have been changed, but the story remains the same in yet another version of Robert Louis Stevenson's classic 1886 horror tale Strange Case of Dr. Jekyll and Mr. Hyde. The novella had previously been filmed in 1908, 1910, 1912, 1913 (twice), 1915, 1920 (three times; including one with John Barrymore and one with Conrad Veidt), 1931 (which is often considered the definitive version and boasts an Oscar-winning performance by Fredric March), 1932, 1941 (a lavish MGM production starring Spencer Tracy, Ingrid Bergman and Lana Turner), 1950 (made for BBC TV), 1951 (an Argentinian production re-titled THE MAN AND THE BEAST), 1953 (the horror-comedy ABBOTT AND COSTELLO MEET DR. JEKYLL AND MR. HYDE, starring Boris Karloff), 1959 (the well-regarded French version THE TESTAMENT OF DOCTOR CORDELIER), 1960 (the Hammer production THE TWO FACES OF DR. JEKYLL, with Paul Massie in the title role), 1964 (an Italian TV movie), 1968 (a Canadian TV movie starring Jack Palance) and likely others.
.
In addition to the film versions listed above, the story made its way into several cartoon shorts (featuring Mighty Mouse, Bugs Bunny, Tom & Jerry and others), was a featured episode on a handful of television shows (Suspense, Climax!, Matinee Theatre, etc.), spawned a two-part ITV series starring Dennis Price and was a long-running and very popular stage production (which began production shortly after the original story was published). It was so frequently filmed that I, MONSTER wasn't even the only Jekyll/Hyde release of its year. Hammer did a second spin-off themselves (DR. JEKYLL & SISTER HYDE starring Ralph Bates and the sulty Martine Beswick as his evil - and murderous - alter ego) and there was the more obscure American soft porn THE JEKYLL AND HYDE PORTFOLIO. So how does this version (an Amicus production) stand up amongst the other versions? Not too well, I fear.
.
In turn of the century London (1906 to be precise), scientist and Freudian psychologist Dr. Charles Marlowe (Christopher Lee, who had already played a supporting role in Hammer's 1960 version) concocts a serum he believes will help "break down the barriers of the subconscious." He first tests it on a common housecat, which instantly goes berserk and must be killed. After a few alterations and concocting a back-up antidote in case things get out of control, Marlowe decides to test it on a few of his patients... without their knowledge, naturally. Prim, proper and repressed Diane (Susan Jameson) ends up stripping off her clothes and tries to seduce the doctor, while a loud brute named Mr. Deane (Kenneth J. Warren) turns into a wimpering child. Since Marlowe's antidote seems to work on both, he decides to start testing the serum on himself. It isn't long until his evil (and murderous) alternate personality, Edward Blake, is hanging out in the pubs, alleyways and cobblestone streets late into the night.
.
One major problem is that Lee looks exactly the same before and after his big "transformation." It's asking far too much of the viewer to accept that several of Marlowe's close friends see 'Edward Blake' and automatically think it's a completely different person. Lee does what he can with his face and body language but is given an impossible task here. As Blake he gets to wear a tophat and cape, has messy hair with the hat off, possibly a whiter complexion and is asked to try to maintain a ridiculous-looking and forced toothy grin. He's supposed to get progressively uglier with each injection, though the make-up is so minimal that he's never quite the monstrous being he should be. Lee is also given nothing interesting to do as either Charles or Edward. Aside from getting in a razor/scalpel fight with a punk in an alleyway and beating a tart (Marjie Lawrence) who embarrasses him to death with a cane, there's no action, no surprises and no real sense of terror. The film also lacks tension and there's no dramatic push to move the scenes along. The film almost seems D.O.A. right out of the gate.
.
Second-billed Peter Cushing has a minor co-starring role as Frederick Utterson, a colleague of Marlowe's, who questions both his friend's ethics and his association with Blake. Cushing doesn't have much screen time here and mostly hangs out at a gentleman's club talking with a couple of other very dull doctors, played by Mike Raven and Richard Hurndall. In a faint echo of the finale of HORROR OF DRACULA, Cushing does get a hand in the demise of Marlowe/Blake/Lee, but it's about as exciting to watch as the rest of the film. Meaning, not at all. Production values, sets and costumes are all OK, and if scenes of Lee thrusting a bunson burner or carrying a mouse directly toward the camera seem odd, it's because this was originally planned as a 3D release; a plan that was abandoned midway through production. Michael Des Barres and Ian McCulloch (from Lucio Fulci's cult hit ZOMBIE) have small roles. Milton Subotsky (who also scripted) and Max Rosenberg were the producers. Director Weeks also made MADHOUSE MANSION (1974) with Marianne Faithful.
.
First distributed by Sinister Cinema on VHS, the R1 DVD (which isn't in the best of condition. so beware) is from Retromedia. Supposedly the British DVD release (from Optimum) is of much better quality.
.
★★
Posted by The Bloody Pit of Horror at 4:02 PM 2 comments: