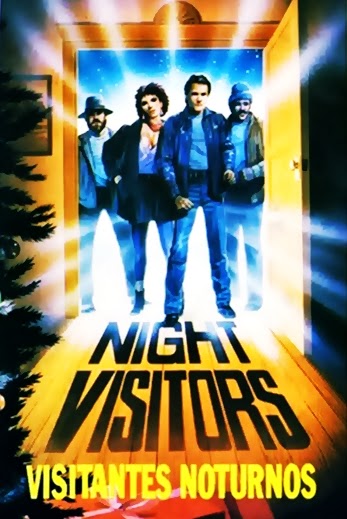 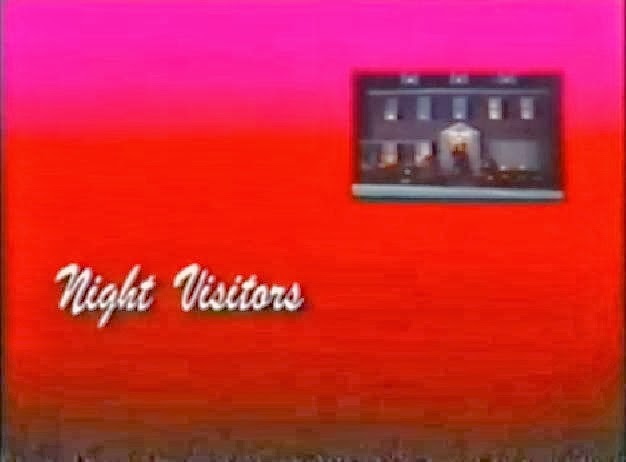 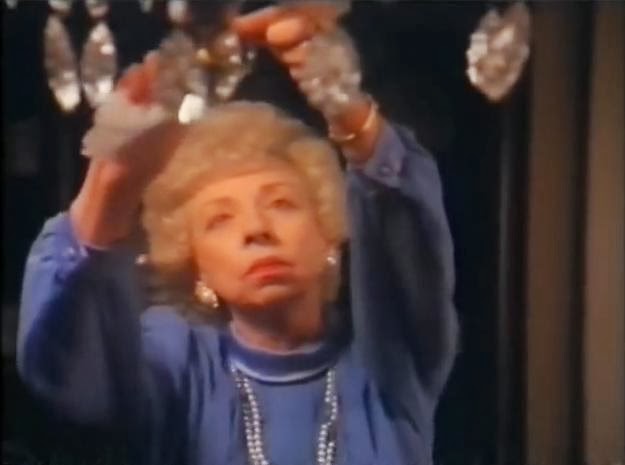 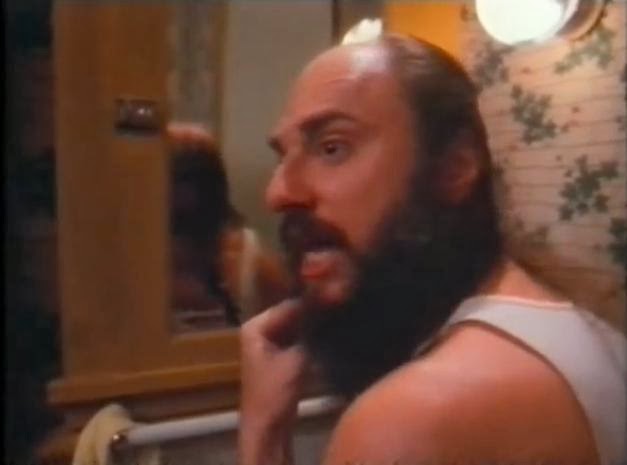 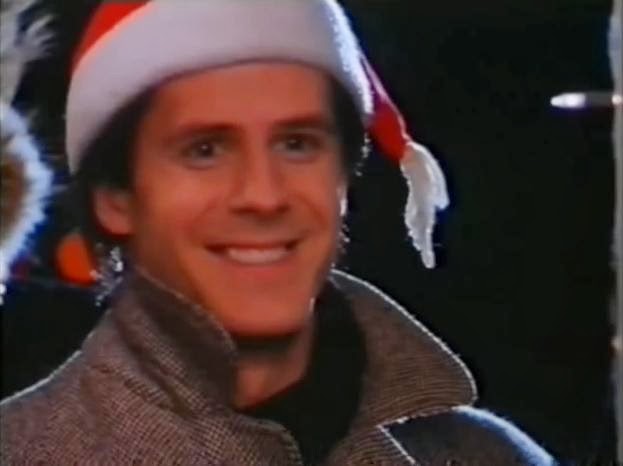 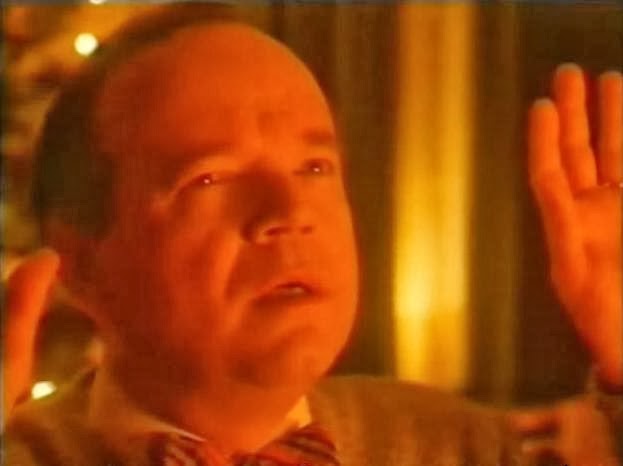 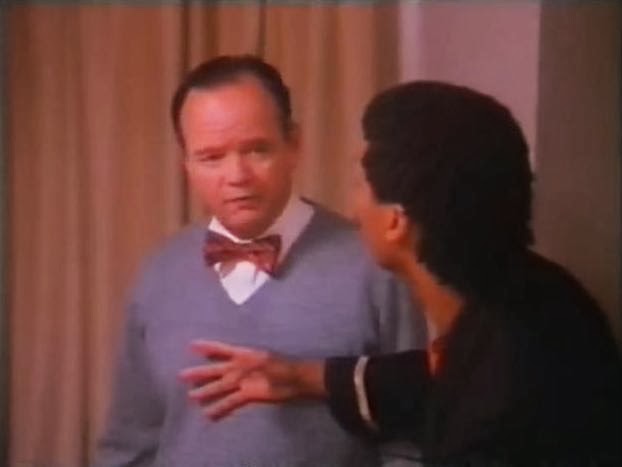 Essentially a black comedy that utilizes a common horror sub-genre - the home invasion thriller - in telling its story, this isn't really a horror film in the traditional sense despite being marketed as such in some quarters. What it really is is a series of darkly comic psychological games played out for specific character revelations; a nightmare scenario where all of the participants will learn, grow and ultimately change for the better by the end of the film. I know. It wasn't what I was expecting to see either.
Things center around the uptight, upper class Whitmore family of the Cleveland, Ohio suburb of Shaker Heights, who are gathered together for the holidays to celebrate Christmas Eve. Father Lloyd (David Schroeder), an engineer who uses words like "gosh" and "dandy" and refers to blacks as "colored," and stuffy homemaker mom Carolyn (Rochelle Savitt), have presided over a very strict household over the years; attempting to instill both good manners and an appropriate amount of Catholic guilt into all three of their children. Their eldest son, 26-year-old Tad (Joe Whyte), does well for himself as an accountant in Cincinnati... but he's a socially inept virgin. 19-year-old Robbie (Gabai) is a shy and introverted college student at Holy Trinity College who has withdrawn from his peers to focus on his ham radio hobby. Youngest child Katie (Jeralyn Fabre), a high school senior, is also expected to carry on the family tradition of a Holy Trinity education, but she's secretly having second thoughts. Granny Ardis (Billye Ree Wallace) is also on hand to complain about dust and treat the kids to a "dirty joke" about, uh, stinky socks. 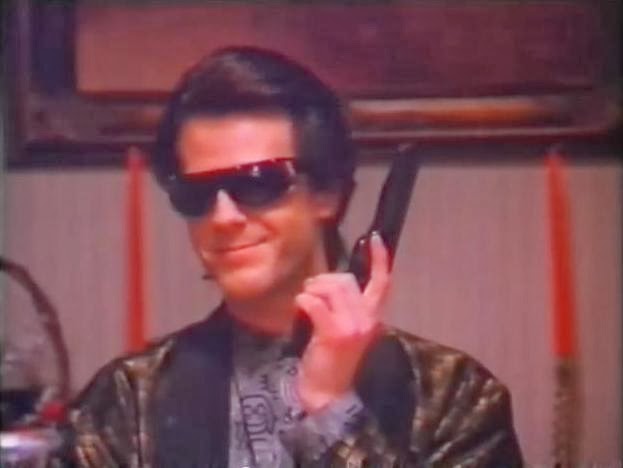 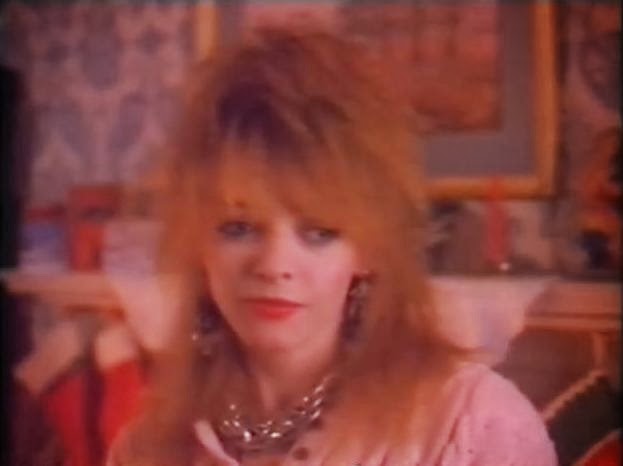 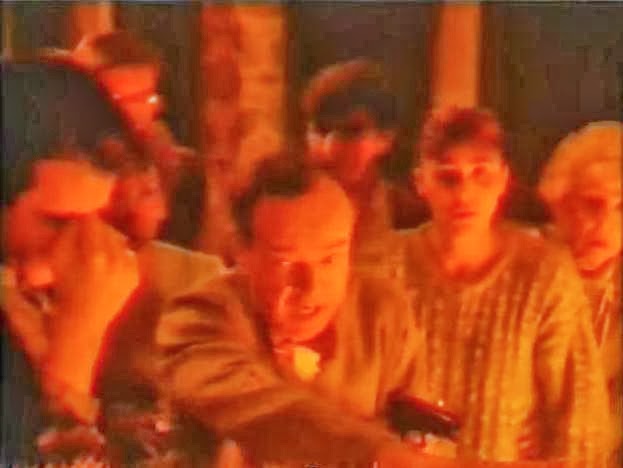 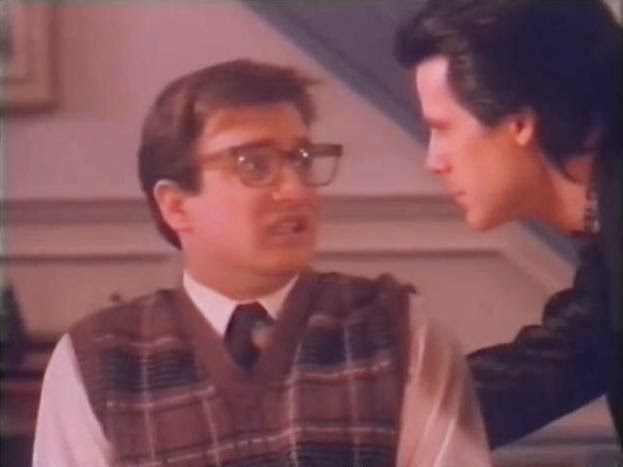 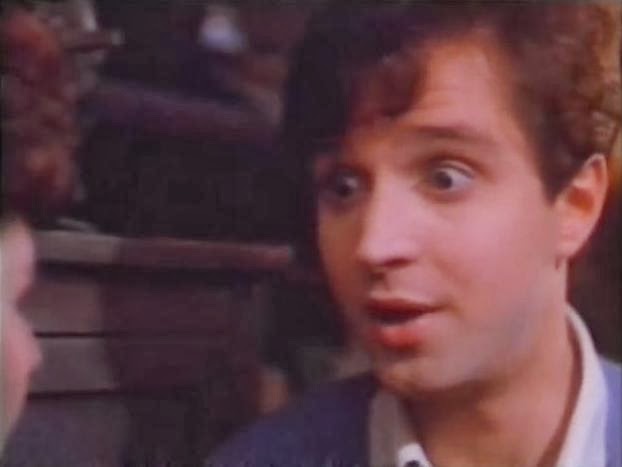 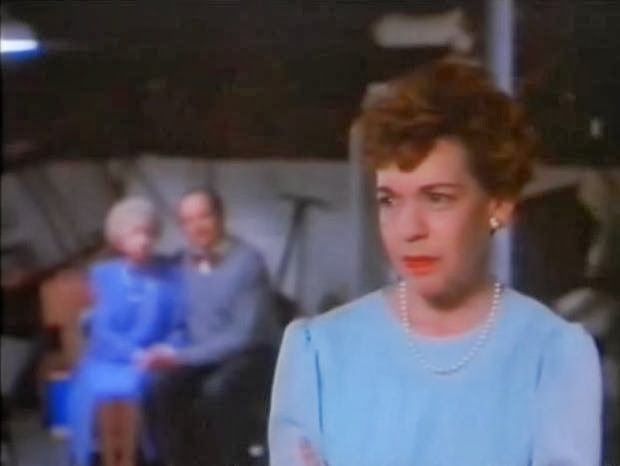 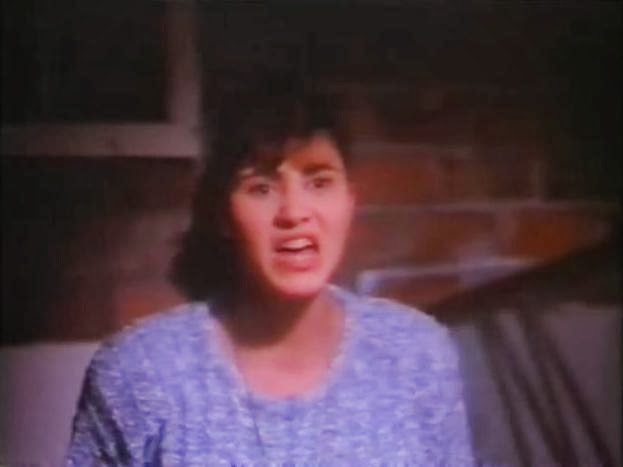 Everyone knows a Whitmore family. Some are even part of a Whitmore family. You know; sweaters and buttoned-up dress shirts and bow-ties for the guys; ankle-length, ladylike skirts for the girls. Censored games of Trivial Tidbits. Turkey. Tree. Individuality and dissent are stamped out. Fake smiles. Repression... and, of course, lots of bitterness and resentment stewing underneath the entire façade just waiting to boil over. The catalyst for change finally arrives in the form of a quarter of carolers who show up on their doorstep, sing "We Wish You a Merry Christmas" and then gain entrance to the home after claiming they need to use the phone because their car has broken down. Instead of the good church-goers they initially claim to be, the carolers are actually dangerous thugs who want to rob the place. At least at first.
Ringleader Travis (Daniel Hirsch, also the associate producer), slutty Lucy (Michele Winding), manic, bearded junkie Earl (Richard Rifkin) and black klepto Reerah (Gregory Carlton Battle), all decide to have a little fun first. They're loud, vulgar, crude and obnoxious, ruin the family's dinner, unwrap all of their presents, hold them hostage at gunpoint and try to spur them into violent retaliation. The demented Travis' primary objective is actually to get one of the passive family members to kill him so he can fulfill his obsession with going over to the great beyond. In films similar to this, there's usually a lot of violence and rape, but this film plays the scenario entirely for story and character development. In other words, don't go in expecting thrills because there's very little of that here. 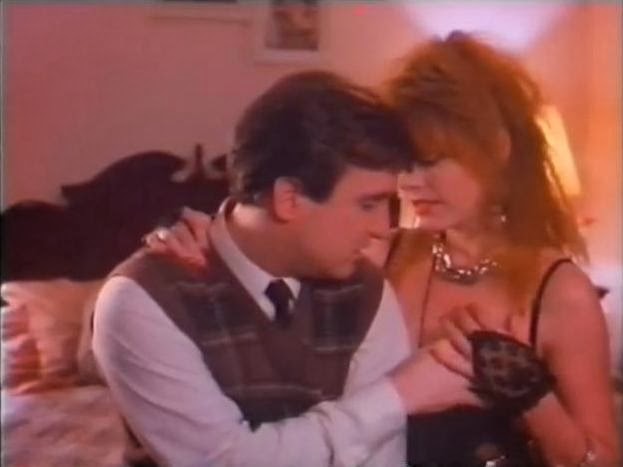 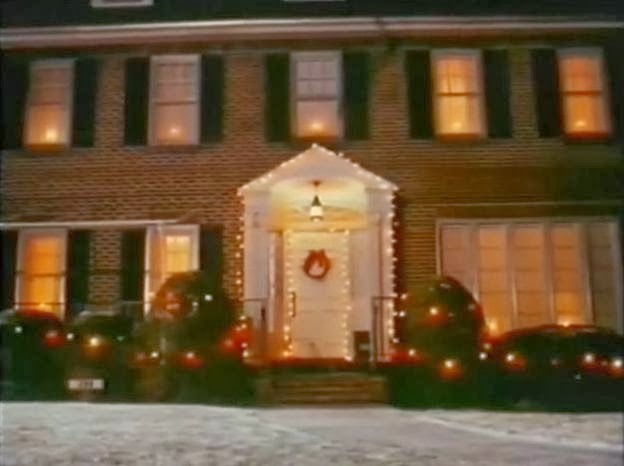 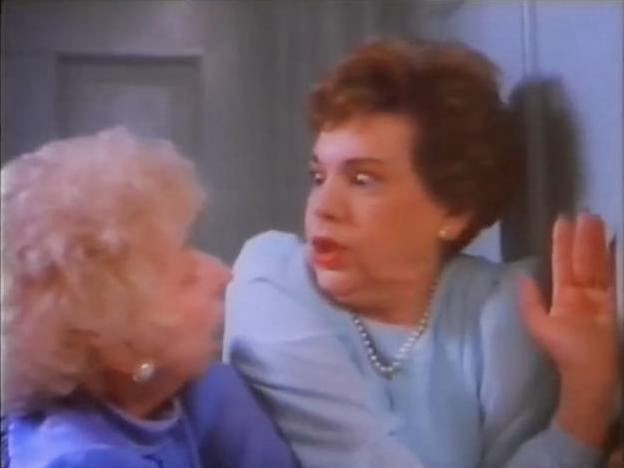 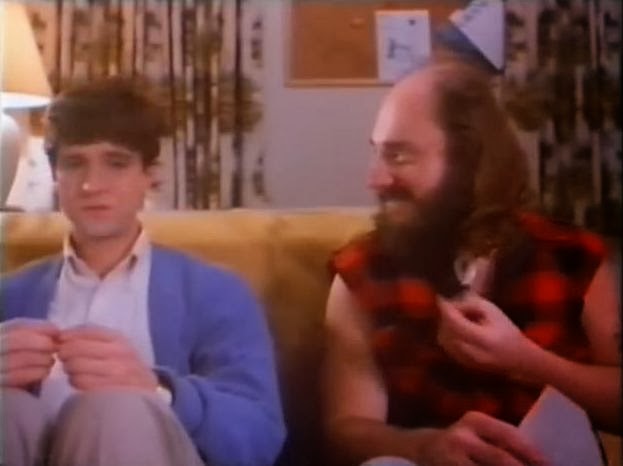 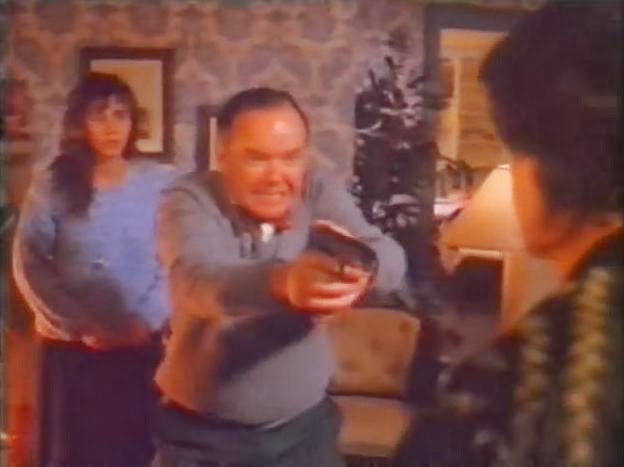 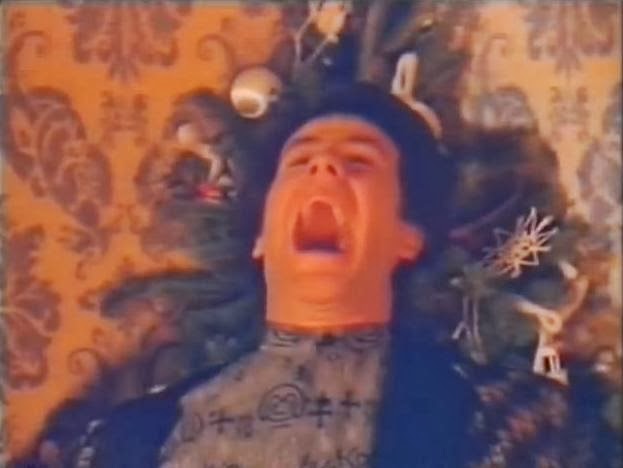 I didn't dislike this. It's fairly well-written and acted, there's some amusing satire and a few isolated moments of insight, it managed to keep my attention and its put together competently. However, there's also a bland lack of cinematic quality to the proceedings in what is essentially a talky filmed stage play. It's extremely heavy on dialogue, there's minimal action, minimal location change (95 percent of the film takes place in one home) and it fails to generate any real tension or suspense, which would have helped to strengthen and accentuate its themes. I can now fully understand why this never gained a VHS release here in America. Distributors probably realized this hard-to-pigeonhole, minimal-interest low-budget film would have been a nightmare to try to successfully market during the video era.
It was filmed in Sharon, Pennsylvania and features music (including an original Christmas song) by Ernest Troost, who'd go on win a Daytime Emmy Award for his TV work and also did scores for Dead Heat (1988), Tremors (1990) and many others. There's no DVD release and, with just 8 votes currently on IMDb, it doesn't appear that many people in the foreign market bothered watching it where it was available.