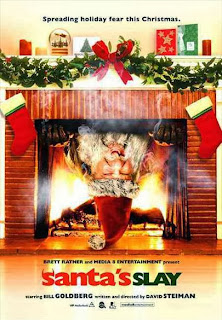 
According to "The Book of Claus" there have only been two immaculate conceptions in the history of man. The first and most famous, of course, was God planting his seed in the Virgin Mary, resulting in the birth of Jesus Christ. But did you know that Satan simultaneously impregnated an unsullied lass named Erica, who then gave birth to her own evil son the same day? And that son was named... Santa! Do you now resent your parents for lying to you all these years? Santa is not, in fact, a jolly, generous, hard-working, magical man who spends all year at the North Pole with his elves making sure all good girls and boys will be getting gifts on Christmas morning. He's actually a demon who gets his jollies by slaughtering everyone he comes into contact with. In the days of old, Santa used to spend Christmas on a joyful murderous rampage. That day became known as "The Day of Slayings." But the demon has long been out of commission thanks to him losing a bet to an elderly angel a millennium ago. In the interim, Christianity spread, the myth of a good Santa was devised and the truth was long buried... but the thousand years are now up and Santa's ready to make up for lost time. And that's the premise for which this mean-spirited holiday horror comedy hopes to warp the true meaning of Christmas for our amusement. 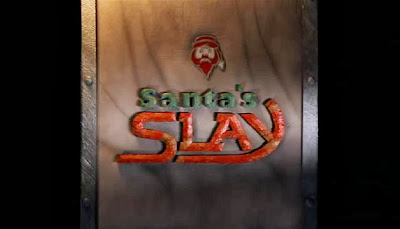 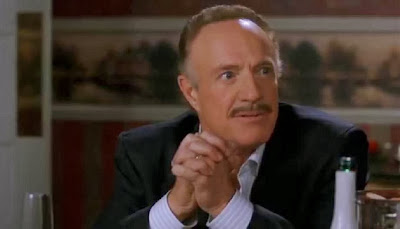 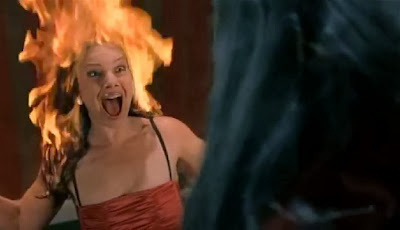 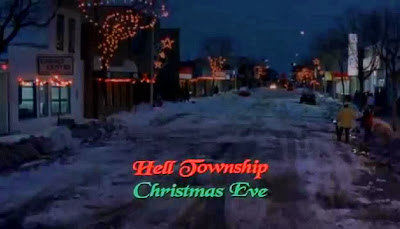 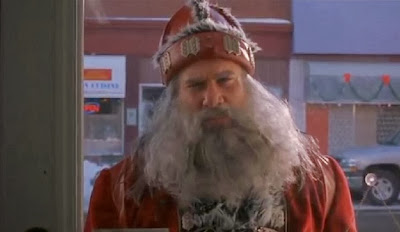 Cast in the lead role as the evil, murderous Santa is big guy Bill Goldberg, who's best known as a professional wrestler. Now I don't watch nor do I enjoy professional wrestling, but it hasn't been lost on me that a good number of wrestlers end up starring in horror films for one reason or another. Perhaps it has to do with their intimidating size, but I think for the most part it's because being a pro wrestler actually requires a lot of acting anyway, so why not? Tor Johnson (best known for his Ed Wood film appearances) and masked grappler Santo (star of dozens of genre films in Mexico starting in the late 50s) are early examples of this phenomenon. After them we got Jesse "The Body" Ventura in Predator (1987), "Rowdy" Roddy Piper in John Carpenter's They Live (1988) and the upcoming Pro Wrestlers vs. Zombies (2013), Dwayne "The Rock" Johnson in The Mummy Returns (2003) and Doom (2005), "Diamond" Dallas Page in The Devil's Rejects (2005) and Snoop Dog's Hood of Horror (2006), Glenn "Kane" Jacobs in See No Evil (2006), Chris Jericho in Albino Farm (2009) and the list goes on. Now I personally don't mind these guys being cast when they can act; sometimes they can and sometimes they can't. Often times, the parts don't even require much acting. This particular role - which basically requires girth, almost constant scowling and little dialogue said through clenched teeth - is actually a pretty good fit for Goldberg and he acquits himself fairly well here. 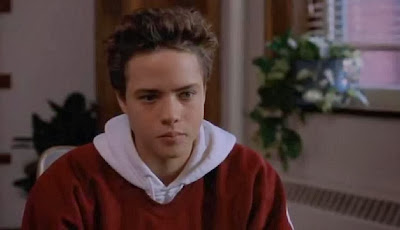 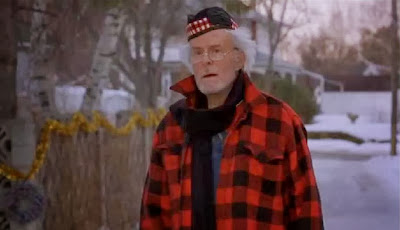 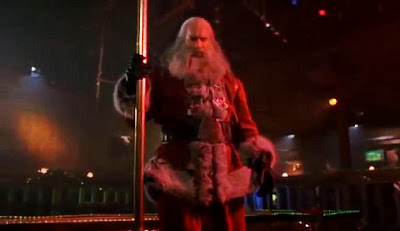 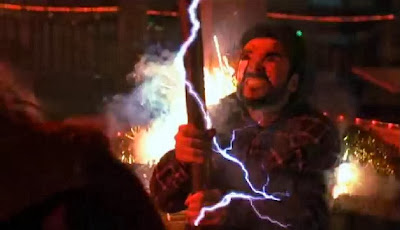 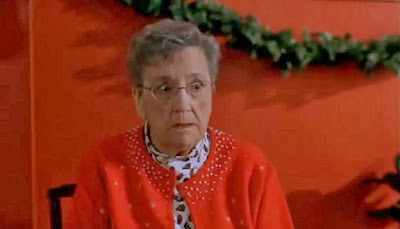 Things begin with an entire family of rich snobs (played mostly by washed-up former stars) being slaughtered in a variety of ways. Chris Kattan is kicked into a curio cabinet, Rebecca Gayheart is smacked upside the head with a table leg, Fran Drescher gets torched and drown in bowl of eggnog and James Caan gets a turkey leg shoved down his throat. Considering Caan's career has always been pretty strong since The Godfather days (he was just in the family hit Elf (2003) two years before this), it's kind of odd seeing him in an independent B horror flick, but here he is, anyway. The guy must have a sense of humor. The events all take place in the small, wintry village of Hell Township, where Santa runs a cranky old lady off the road with his sled (which is pulled by a huge reindeer... or is that a buffalo?) and uses things like sharpened candy canes and wreaths to make shot work of the cast. He also burns down a strip club after killing nearly everyone inside, slaughters all of the local cops, sticks a Menorah through a Jewish man's neck and does lots of other, shall we say, naughty things. Opposing him are our heroes Nicolas Yuleson (Douglas Smith), a 16-year-old who works at a deli, his spunky co-worker / romantic interest Mary Mackenzie (Emilie de Ravin, who appeared in the Hills Have Eyes remake the following year) and Nicolas's eccentric Grandpa (Robert Culp, who's great here); a reclusive inventor not well liked by the townspeople. Gramps turns out to be a good archangel who's still on Earth to make sure Santa in put out of commission for good, unbeknownst to his grandson. 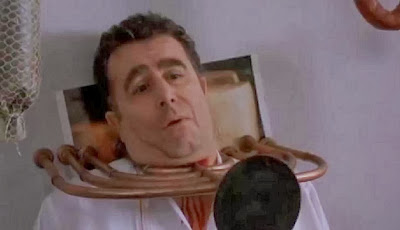 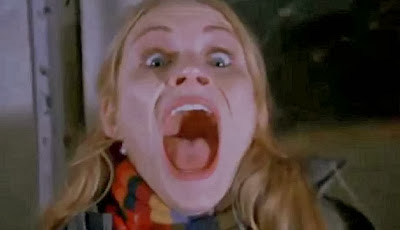 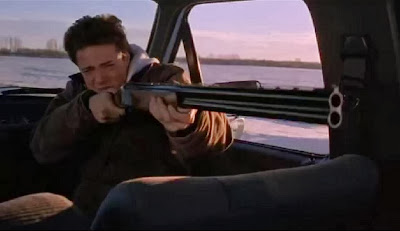 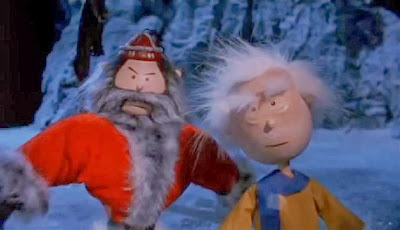 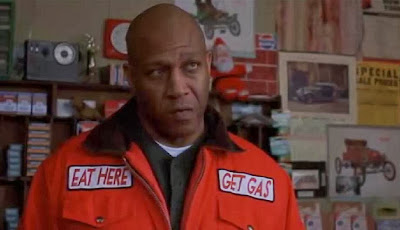 Stripped down, Santa's Slay is basically just a series of violent comic gags. Some of these don't work at all and you'll be rolling your eyes and groaning at a lot of the one-liners, which are intentionally corny but corny nonetheless. The profanity also seems a little excessive. While I don't mind profanity at all, when nearly everyone's running around saying "Fuck this" and "Fuck that" and you realize the writer thinks this is going to elicit laughs in and of itself, it begins to seem forced and grates on the nerves a bit after awhile. That said, enough genuinely funny moments seep through to overcome the bad. There's plenty of action and bloodshed, the young leads are appealing, the premise is imaginative and amusing and clever directorial touches are sprinkled throughout. My favorite bit by far was a stop-motion animated flashback (which seems inspired by the classic Rankin/Bass Rudolph the Red Nosed Reindeer holiday special) to where Santa and the angel face off over a game of curling! Wisely, the running time is just 78 minutes (over 8 minutes of which is credits), so this moves along briskly and doesn't wear out its welcome. 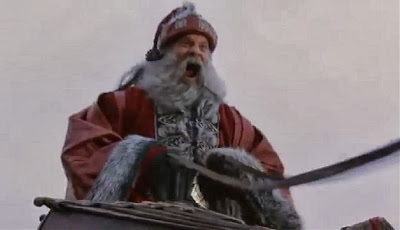 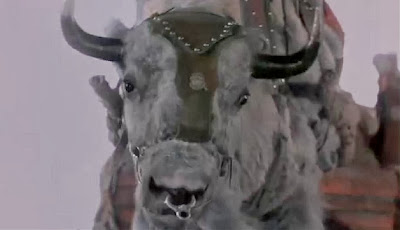 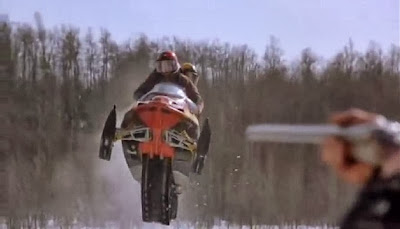 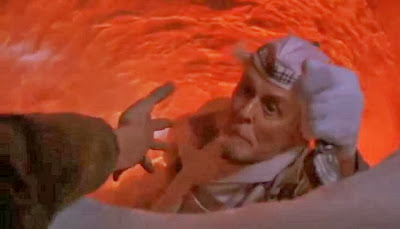 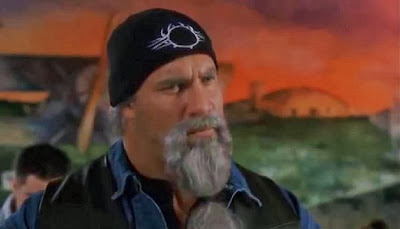 Dave Thomas (playing a hypocritical reverend), Saul Rubinek (deli owner) and Tommy "Tiny" Lister all have small roles, Brett Ratner (who'd previously directed big Hollywood hits like the Rush Hour series and X-Men 3) was one of the many producers and most of the soundtrack consists of rock covers of Christmas classics. It was filmed in Canada on a 4.5 million dollar budget.

Merry Christmas friends! I hope everyone has a wonderful day tomorrow.