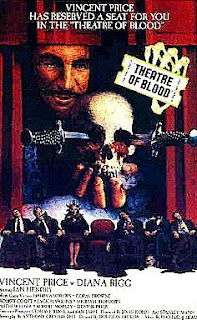 ...aka: Much Ado About Murder

Directed by:
Douglas Hickox
Egotistical Shakespearean actor Edward Lionheart (Vincent Price) has dedicated his life to various adaptations of the Bards works, with no awards and little recognition from the stuffy theater critic’s circle. With help from his dedicated daughter Edwina (Diana Rigg) he devises a plot to get revenge. By donning various disguises, the two lure the critics into a web of death with the works of Shakespeare used as the blueprint for revenge. Othello, Macbeth, Richard III, Titus Andronicus and others are tipped on their heels, for the very literate and incredibly (for the time) gory killings. The all-star supporting cast does a great job (particularly Rigg and Robert Morley as a effete snob with twin pet poodles), but this is Price's show all the way, and he delivers a brilliantly layered, funny and malicious performance that takes an entire career of acting in similar, more serious movies to be able to pull off. Just wait until you see him disguised as a flamboyant hairdresser, complete with afro! The engaging premise and witty dialogue come courtesy Anthony Greville-Bell's clever screenplay. Still, there is something ever-so-slightly off about the tone of this one (it's a bit too far on the snide and mean-spirited side to be as much fun as it could be) that keeps it from greatness.
The top-notch supporting cast includes Ian Hendry, Harry Andrews, Coral Browne (who would marry Price the following year), Milo O'Shea as an inspector, Jack Hawkins, Michael Hordern, Dennis Price, Arthur Lowe, Madeline Smith, Diana Dors, Renee Asherson and the voice of Charles Gray.
★★★
Posted by The Bloody Pit of Horror at 2:41 AM

The great man's finest role. this review is a little churlish

The great man's finest role. this review is a little churlish

Definitely one of his best! I plan on writing a longer review for this one soon so this will eventually get deleted.