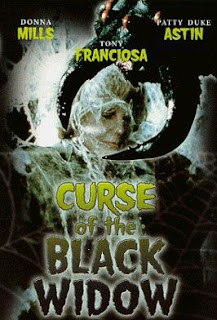 Directed by:
Dan Curtis
Monumentally silly made-for-TV movie with plenty of funny, campy moments and an especially fine roster of character actors seriously slumming for a paycheck. I'd love to ask Dan Curtis if this was actually a rejected potential episode of his great series The Night Stalker. Valerie Steffan is a mysterious woman with dark hair and eyes, who talks like Adolf Hitler and likes to pick up men in bars. Only problem is instead of having a fab time, the guys end up drained of blood and wrapped in a webbed cocoon. It's because she's actually a giant black widow spider! Duh! Several of the victims are former fiancés or lovers of fashionable star Donna Mills. Is the killer jealous of her perfectly feathered blonde locks or white flair pant suits? Or is it just the nature of the "freak-o human fly?" If you enjoy funky music, flashy fashions, cheesy acting from a cast who certainly know better, eight-eyed POV bug shots, puppet monsters that look like they time-warped in from the 1950s and dialogue like, "Why don't I hold a press conference and tell them it's a big spider killing people and I'll issue all my men giant cans of Raid and send them out after it?," then this one's for you! And as dumb as it all is, it's very enjoyable if you like these kind of things.
Top-billed Anthony Franciosa, as a detective investigating the mysterious murders (obviously cut from the Kolchak cloth), and Patty Duke, as a meek and homely woman who may have a totally opposite alter ego (a-hem!) star. The cast includes June Lockhart as Duke and Mills' mother, June Allyson, Max Gail, Jeff Corey, Roz Kelly, Sid Caesar and Vic Morrow as a police lieutenant. Don't fall into the LOVE TRAP, baby!
Score: 4 out of 10
Posted by The Bloody Pit of Horror at 10:08 AM