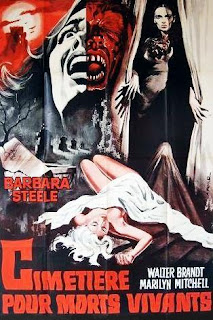 
A letter arrives at the law office of attorney Joseph Morgan ("Richard Garrett" / Riccardo Garrone) from a Dr. Jeronimus Hauff asking him to come to his secluded villa to oversee his will. Since Mr. Morgan is out of town of business, his colleague Albert Kovac (Walter "Brandt" / Brandi) takes it upon himself to go in his place. Upon arriving, he meets Dr. Hauff's daughter Corinne ("Marilyn Mitchell" / Mirella Maravidi) as well as Hauff's young widow / Corinne's stepmother Cleo (Barbara Steele). Albert soon learns that Dr. Hauff has actually been dead for almost a year and the women only arrived there yesterday because the doctor's body is being moved over to the family chapel on the one year anniversary of his passing. So it couldn't have been him who sent the letter... or could it? After all, the handwriting and the seal (which was actually put into the deceased's coffin) used on the letter match the dead doctor's. Corinne believes it may be a warning or an omen from beyond the grave. Cleo thinks she's just being childish. Either way, most of the local villagers are too scared to come onto the grounds because Dr. Hauff was known to have dabbled in spiritualism and the occult. 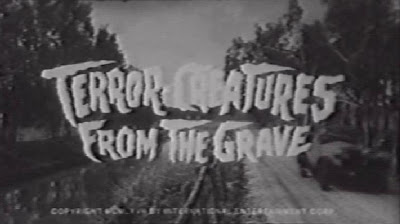 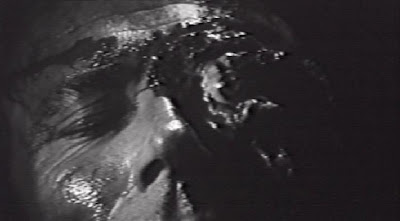 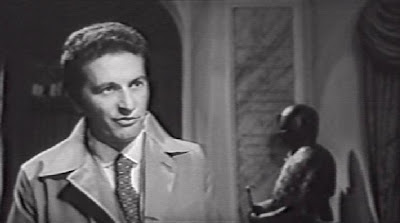 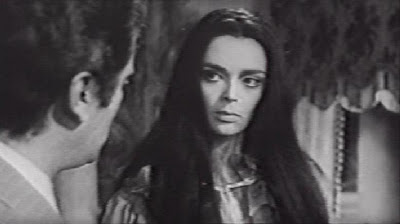 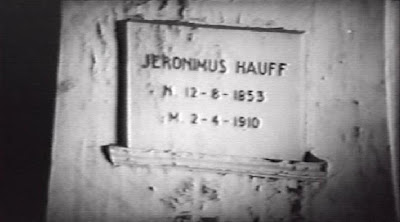 The letter and the legacy of Dr. Hauff aren't the only two weird things going on. The house itself was built on top of the ruins of a 15th Century hospital where plague victims were brought to die. Claw marks appear on a statue and the mummified hands of executed men who supposedly spread the pestilence out of sheer malice are even used as morbid decorations. Maid Louise (Tilde Till) refuses to even spend the night there, but gardener / servant Kurt ("Alan Collins" / Luciano Pigozzi) hasn't left the villa since Dr. Hauff passed away, nor has he spoken a single word. Albert finds a phonograph recording left behind by the doctor ("I've summoned them from their graves, and now I am among them"!) and the following day the engine in his car is destroyed by an owl (!) He becomes acquainted with the friendly Dr. Nemek ("Alfred Rice" / Alfredo Rizzo) who briefs him on the local superstitions. The paralytic Oskar Stinnell ("Edward Bell" / Ennio Balbo) warns everyone to leave the villa because "The day of revenge is coming!" 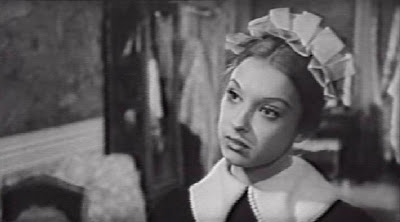 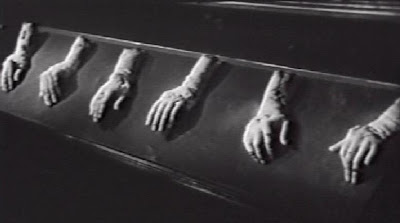 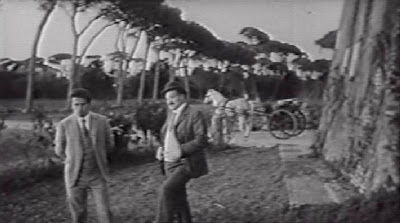 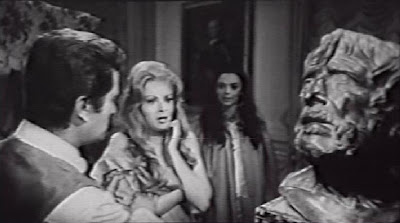 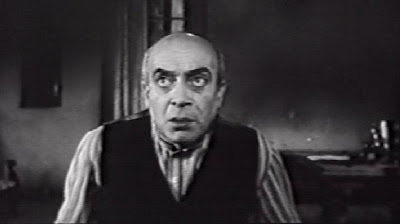 After the village mayor's face is half eaten away by acid, Albert decides to do some research and discovers that the victim - as well as two other men - have recently died under mysterious circumstances. All three men, as well as two others who are still among the living (at least for the time being) signed off on the death certificate because they were all present during Dr. Hauff's supposedly accidental death. Did he fall down the stairs in a drunken stupor like they claim, or was he actually murdered and now wanting revenge against all of those who did him in? And if you've seen a few of these things already, you don't even need me to answer that question.

Set in 1911, this black-and-white period Gothic horror suffers from poor English-language dubbing and translations, plus an overly-familiar plot involving the usual blackmail, betrayal, adultery, murder and revenge from beyond the grave, but it has its moments, too. There are some stylish sequences in here, the music score (including a haunting lullaby about pure water) is pretty good and unlike many others of this type and from this era, numerous scenes are shot outdoors in scenic locations. There are also some surprisingly gruesome moments in here for the time. A man is kicked in the face by a horse until his eyeball falls out, guts are seen after a man impales himself with a sword, faces erupt with bubbling lesions when victims touched by the dead are given an advanced form of the plague and severed hands come to life and start slowly moving their fingers. The well-done make-up effects are credited to "Bud Dexter;" who may actually be future Oscar-winner Carlo Rambaldi. Steele (who is top-billed but not the lead) and Maravidi show about as much skin (bare backs, bare shoulders, legs) as was allowable at the time in a mainstream release. So while not a great film by any means, there's probably just enough here to satisfy fans of this sub-genre. 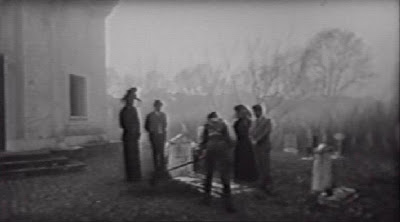 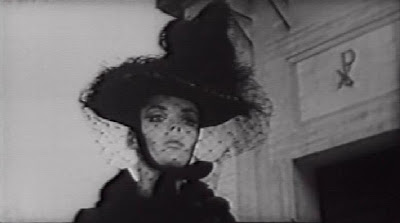 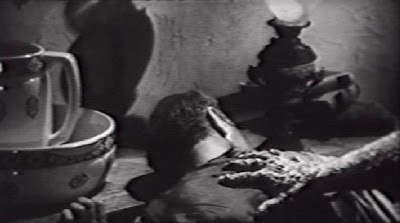 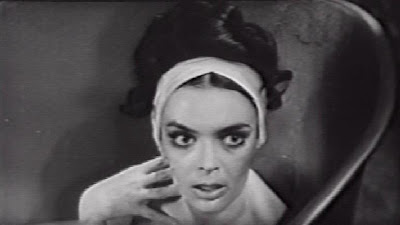 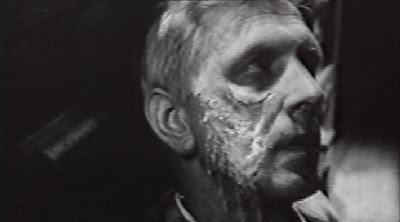 Filmed as 5 tombe per un medium ("Five Graves for the Medium"), this was given the more lurid-sounding Terror-Creatures moniker for U.S. distribution, along with new fake Anglicized credits (only Steele is properly billed). Four different writers are credited for the screenplay, which is said to have been "based on the writings of Edgar Allan Poe." (They're probably referring to "The Masque of the Red Death," which also involved the plague). Director Pupillo was apparently not very happy with the finished product so he allowed co-producer Ralph Zucker to take credit for directing the film. Pupillo also made two other Gothic horrors the same year: the sleazy (by mid-60s) standards The Bloody Pit of Horror (1965), which starred bodybuilder Mickey Hagitay, was also produced by Zucker and again featured Brandi and Rizzo, and the hard-to-find The Vendetta of Lady Morgan (1965), which starred Paul Muller, Erika Blanc and Gordon Mitchell and doesn't appear to have ever been released in America. 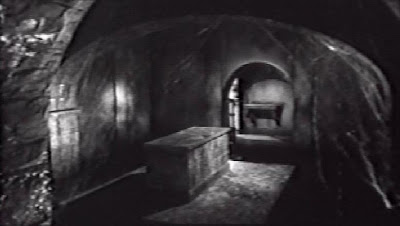 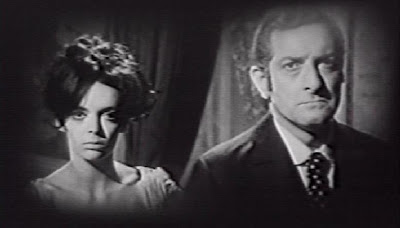 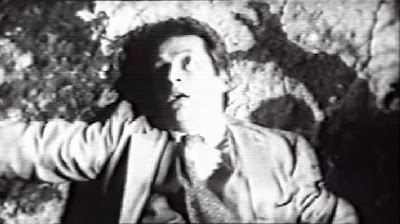 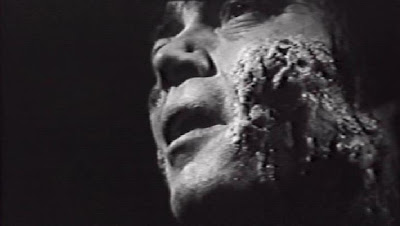 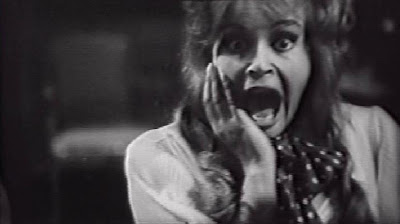 The print used on the DVD distributed by Alpha Video Classics (which is what I viewed) is in pretty awful condition; complete with jumps in editing and sound and a very faded picture quality.