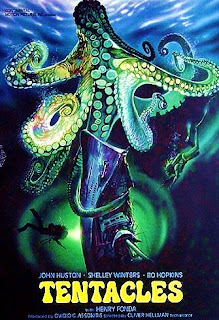 
In the small coastal town of Solana Beach, California, the annual junior "yacht race" (actually a sailboat race) is just days away when something (read: a giant octopus) starts gobbling up the locals left and right. First on the menu is 10-month-old Baby Billy, who probably didn't stand much of a chance anyway considering his dumb-as-dishwater mother leaves him sitting alone by the water in a stroller while she runs off to gossip with a friend. Next up, a peg-legged fisherman disappears and his mangled corpse later turns up to stop an obese teenage girl from raping her disinterested date on a dock. (I'm not joking.) And then two divers go down to check out the status of some underwater cables and don't come back. They and other corpses are quickly filling up the morgue and all are stripped down to the bone and with all the marrow sucked out. Sheriff Rolands (Claude Akins) is at a loss what to do but he's apparently never seen a monster movie before. One should always check to see what kind of unethical corporation is in the area and what they're up to first and then go from there. In this case, it's a company drilling through the ocean floor with experimental new equipment as they attempt to build an underground tunnel.

The only thing that really separates this poorly-made, by-the-numbers and rather dull killer animal flick from others of its type is its surprisingly upscale cast. John Huston (two-time Oscar winner for The Treasure of the Sierra Madre) receives top billing playing former “big city journalist” Ned Turner, who's recently retired to the small, quiet community to work at the local paper and live with his sister, Tillie. Though Huston is rightfully better known as a filmmaker he also wasn't a bad actor, which he proves here by managing to get through the proceeding without embarrassing himself. The same cannot be said for most of his co-stars. His sister Tillie is played by another two-time Oscar winner - Shelley Winters - and while she does kind of embarrass herself (the ten gallon sombrero doesn't help matters) it's in that great Shelley Winters kinda way. She deserves some credit for at least bringing some kind of energy / entertainment value here as she camps it up as an over-the-hill barfly and nagging, overbearing single mom who starts each morning with a Bloody Mary and spends every evening trying to pick up a random stud from the local bar... Or so we hear, we never actually get to see that last part, unfortunately.

The other big name this picture was sold on the back of was Henry Fonda. It's hard to imagine watching Fonda here (he's awful!) that he'd go on to win his own pair of Oscars a few years down the line, but that's exactly what happened. His character, Mr. Whitehead, is the president of Trojan Tunnels Inc.; the company responsible for unleashing the giant octopus in the first place by using high radio frequencies “well beyond the legal limit.” Fonda has minimal screen time in this one because he was still in the process of recovering from a major heart surgery. Supposedly his three brief scenes were all filmed in a single day, which probably explains why they let a flubbed line slide through. Fonda also isn't really the main bad guy as he's oblivious to what's going on with his own company while his second-in-command, John Corey (Cesare Danova) is overseeing the entire project. Danova comes off even worse than Fonda here thanks to being the lucky recipient of a horribly wooden over-dub.

After several corpses are found, Huston's character runs off and recruits Will Gleason (Bo Hopkins), the best “marine expert” in the area. Will's clingy wife Vicky (Delia Boccardo) unsuccessfully tries to talk him out of getting involved but then expresses no opposition to her own sister Judy (Sherry Buchanan) going into dangerous waters on a snorkeling pleasure cruise with two of her male friends, including rotund Italian comedian Franco Diogene. When Judy doesn't come back, Vicky charters a ship (late at night, of course) to look for her and is killed along with the crew when the octopus crashes into and sinks their ship. After the carnivorous calamari turns a children's boat race into an all-you-can-eat buffet, Will and his colleague Mike (Alan Boyd) take two killer whales out to some caves where the monster lurks in hopes of killing it.

Mostly awful acting, terrible dialogue, a bland / entirely rehashed sub-Jaws plot, not nearly enough octopus action, poorly-directed and suspense-free attack scenes and no notable special effects to speak of sink this lame creature feature pretty quickly. The only things bringing it to occasional life are some interesting directorial flourishes, including a long unbroken crane shot that's surprisingly well executed, plus some decent underwater photography. The poorly-edited attack sequence on the kids, which features an astoundingly awkward use of freeze frames, is also memorable... though I'm not sure for the right reasons. Stelvio Cipriani contributed a bizarre score to the proceedings (which was released as a soundtrack album) and the big finale, consisting of two plastic whale dolls ripping apart a (real) dead octopus while our heroes float around and watch, is one of the least exciting endings I've ever seen to one of these films. 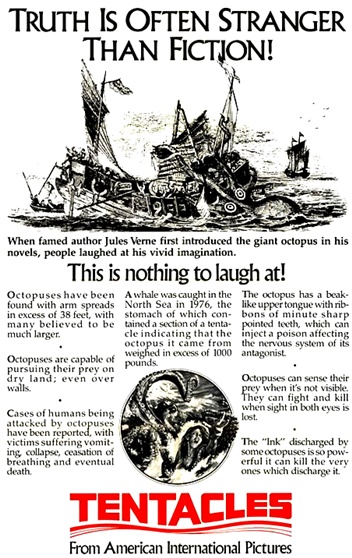 I beg to differ!


I bet they made a ton off of this stupid thing! Usually when I'm looking for posters for a particular film I'll find three or four different ones. For this one, I found posters from fifteen different countries and I didn't have to look hard to find them. Most places just used a derivation of the original title Tentacoli, though a few European countries said fuck it and just called it what it really is: Giant Octopus. Someone has submitted some seriously conflicting information for this one over on IMDb so I'd take what they say with a grain of salt. In the budget section for the film, they claim this cost 750 thousand and 5 million dollars (!?) to make. How a film can have two different budgets is beyond me. The trivia section adds: “The production spent nearly $1 million on a life-sized replica of a giant octopus which promptly sank when they put it in the water.” For starters, there is no way in hell this clearly low budget film with barely any real fx spent a million on an octopus model. Second, if they spent a million on a giant octopus the budget certainly couldn't have been 750K. The five million figure doesn't ring true either considering the same year's much more polished and clearly much higher budgeted (yet still kind of crappy) ORCA cost 6 million to make. So either the 750K is true but the part about the octopus model is a lie or the film cost 5 million and 4 million disappeared into the director's bank account. 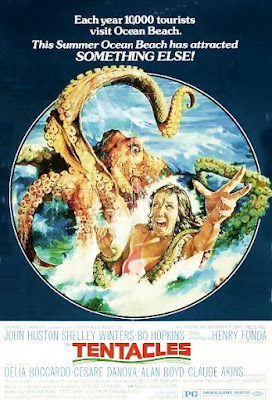 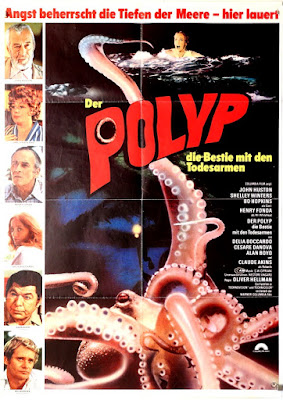 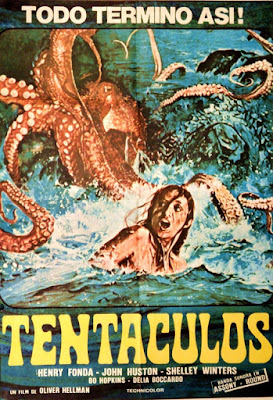 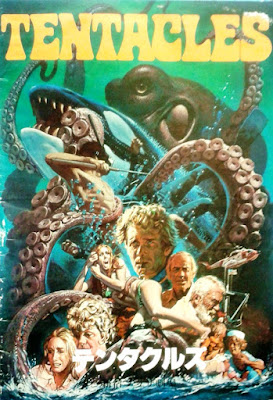 The PG-rated Tentacles was released theatrically here in the U.S. by AIP and went on to gross three million dollars in America alone. After debuting on NBC TV in 1979, it became a staple late night filler movie on cable throughout the 80s and 90s. It was then well-circulated on VHS by companies like Vestron and Orion. All of the above prints of the film were cut by about 10 minutes but it was almost entirely dialogue scenes that were removed. The first full, uncut and still PG-rated version made its DVD debut courtesy of MGM's Midnite Movies line in 2005, where it was double billed with EMPIRE OF THE ANTS (1977). Finally (one can hope!), there's a Blu-ray / DVD combo from Shout! / Scream Factory, who've paired it with the Danish monster movie Reptilicus (1961). This is truly one of those titles that you couldn't avoid even if you tried to but probably wish you had after sitting through it.