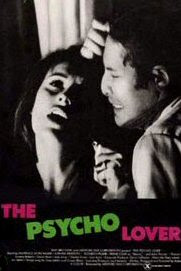 
You'll notice a month+ gap between reviews on here. I was dealing with not only the usual holiday stuff but also trying to help get things in order after a sudden, unexpected death a little over a week before Christmas. I just wasn't in the mood to really sit down and watch anything, let alone a bunch of horror movies. I'm sure many genre fans have been there before. Sometimes you just ain't in the mood for this stuff. Things have settled down a bit since the funeral and everyone's just now starting to get back to their usual routines, including myself. Last week I finally got around to watching a few movies and consciously chose two that I hadn't seen from two of my favorite directors; George A. Romero and Mario Bava. But then a funny thing happened. When I sat down to write the reviews for both I just couldn't pull it together. Yep, I had a bad case of writer's block. I couldn't get my brain working. It probably didn't help that both of the films I chose were perplexing and flawed, yet have their moments of brilliance. Maybe they went over my head. Maybe I had too much going on in there already. 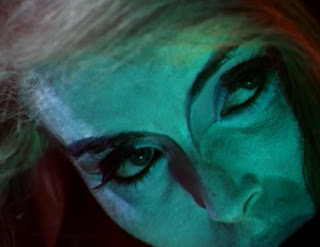 So tonight I decided to view a couple of brainless (s)exploitation shockers that wouldn't require any thought to hopefully get me back into the swing of things. I had a hard time keeping my finger off the fast-forward button while watching the near worthless EVIL EYE, but thankfully THE PSYCHO LOVER - a Something Weird release - was a whole other story. This thing was something else. I wouldn't label it a complete success, but there's plenty of invigorating nastiness going on here as well as some sidesplitting "thoughtful" dialogue. How "thoughtful" is it? We're talking about soft-focus lighting of lovers lying in fields discussing how sad it is that flowers cannot fuck one another. Accompanied by soft rock/folksy songs with lyrics like "A woooman. One smile and all your fear of her will melt away. A woooman. Will make you feel like floating on a summer day." Good lord. 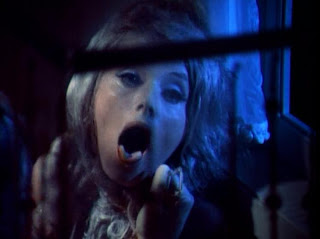 The film opens with a woman undressing and getting ready for bed. A nutcase wearing rubber gloves and pantyhose over his head comes in through the window, pins her down and starts raping her. To his surprise, the "victim" really starts getting into it and that pisses him off since he prefers his unwilling lovers to be in a terrified state. Actually, he prefers them to be in a dead state and can't really perform unless they are. After strangling them to death, he likes doing ever nastier things to their corpses, including deflowering a lesbian photographer with a ketchup bottle. That might not impress you in theory, but this pup has a 1969 copyright date, so I was impressed. It came out years before ILSA's prison camp experiments and the ever-so-popular raped-to-death-by-gigantic-dildo flicks that emerged in Italy during the late 70s! 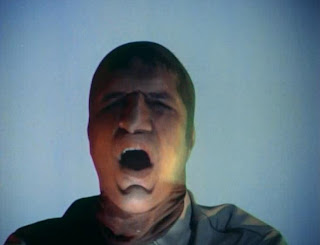 The killer turns out to be a traumatized young chap named Marco Everson (Frank Cuva), who believes his recollections about commiting the crimes are only nightmares. He recounts his stories to psychologist Dr. Kenneth Alden (Lawrence Montaigne) but patient-doctor confidentiality is keeping him from going to the police. Well, I guess that's what's keeping him from going to the police. The subject isn't even broached, even when Ken discusses it with a colleague. They simply let the killer go home and keep raping and murdering women between water cooler talk. As it turns out, Ken does have a reason to keep Marco out of the psych ward. His bitter, alcoholic wife Valerie (Jo Anne Meredith) refuses to give him a divorce so he can be with his bubbly, much-younger lover Stacy (Elizabeth Plumb). While discussing THE MANCHURIAN CANDIDATE with the mistress, a light bulb goes off in Ken's head. Hey, who needs a divorce? Why not just hypnotize Marco, give him orders to kill the wife and then sit back and let the loony do the dirty work for him? 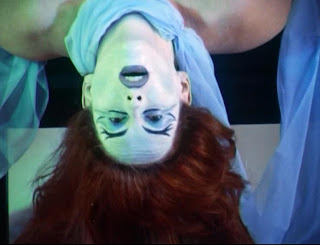 Not only do you get plenty of nudity, sleaze, cheese, violence and an enjoyably far-fetched storyline, but you also get a twist at the end you might not see coming, surprisingly good performances from the actors, some truly bizarre dialogue exchanges ("Let's not commiserate about the poor sex life of some wild flowers.") and even some visual style. There are several sequences here that would be celebrated if they were in an Italian giallo movie. Unfortunately they're in an American exploitation film, so they'll either be overlooked or completely ignored. One of the best scenes takes place in an apartment where the killer plays hide-and-seek with a potential victim while flashing red and green lights outside illuminate the room. The opening of another scene is shot behind a fishtank and most of the night scenes are attractively photographed with a blue hue. There's also a great trippy freak-out sequence shot in a large, entirely white room where the painted ghosts of victims cackle and instruct Marco to "Kill!" with their echo voices and a woman does a belly-dancing routine. Overall, the film is well worth a look.
. .
Gary Kent was the production manager, Donald M. Jones did the sound and director O'Neill returned with BLOOD MANIA (1970) before making his biggest splash with the first two ANGEL ("High School Honor Student by Day. Hollywood Hooker by Night!") films. The cast also includes John Vincent (THE MANSON MASSACRE) as a policeman and Luanne Roberts (who co-starred with Plumb in the sometimes admired lesbian drama THE DARK SIDE OF TOMORROW) and Judy Lang (COUNT YORGA, VAMPIRE) as victims. 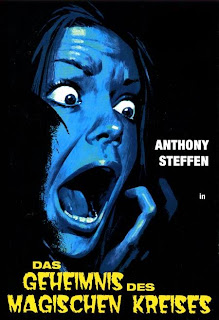 ...aka: Beyond the Exorcism
...aka: Black Magic
...aka: Das geheimnis des magischen kreises
...aka: Eroticofollia
...aka: Evil Eye
...aka: Mal de ojo
...aka: Mas alla del exorcismo
...aka: Secret of the Magic Circle, The
Directed by:
Mario Siciliano
In Rome, wealthy playboy Peter Crane (Jorge Rivero) is having bizarre nightmares involving a screaming red-eyed guru and naked cultists. He's also having headaches and black out periods and the beings in his dreams seem to be able to control him whether he's awake or asleep. While visiting his fashion house announcer girlfriend Tania (Daniela Giordano) at work he meets rich Yvonne Chevrel ("Lane"/ Lone Fleming) who has a connected nightmare where someone informs her "Peter Crane will murder you!" And guess what? That's exactly what happens. Peter goes into a trance, scowls, clinches his fists and then strangles her to death. While visiting his friend Derek ("Alan Collins"/ Luciano Pigozzi) and his unfaithful wife Elizabeth (Pia Giancaro) out in the country, he murders them as well. Peter remembers nothing of the events and goes to a pair of shrinks; Dr. Stone (Richard Conte) and Dr. Sarah Turner (Pilar Velázquez), for help. Police Lieutenant Ranieri (top-billed Anthony Steffen) investigates when the corpses start piling up.
Things get even stranger when Peter checks himself into a clinic. Glass bottles burst, stuff starts moving around and he sneaks out of his room to murder a swinger aquaintance after a topless pool party. His butler Walter (Eduardo Fajardo) tries to blackmail him, murders his lover when she threatens to expose him and then pukes up a frog (?!) and gets shot in the head when a rifle falls off a bookshelf and goes off. The inspector is also being effected by the supernatural presence but his psychic wife sneaks charms in his pockets to help ward off the evil. Peter and his hottie female psychiatrist become lovers. Only in movies, I tell ya. Ethics aside, if you were a shrink, would you immediately jump into bed with one of your patients, especially when he's the chief suspect in a series of murders? And then would you go to an isolated location with said murder suspect for a romantic weekend getaway?
The cast is full of familiar faces for Euro horror buffs but the characters they're playing are dull and you never really care about what happens to any of them. Rivero - a muscular guy who was a major sex symbol in Mexico at the time - and his circle of self-absorbed swinger friends crowding into rooms in a drunken stupor are about at unsympathetic as it gets. Not that the protagonist or side characters need to necessarily get us in their corner, but these people aren't interesting either. They're simply annoying, skeezy and obnoxious. Velázquez is certainly gorgeous to look at but she's stuck playing a complete moron, former Miss Italy Giordano serves almost no purpose in the film whatsoever and Fleming (who has very striking green eyes) isn't around long enough to make much of an impact. Mr. Steffen isn't given much to work with either and his role is actually rather pointless. Kind of like the rest of the film.
BCI/Eclipse have paired this slow, muddled film with BLACK CANDLES (1980) for their Welcome to the Grindhouse DVD release. While this one does have a bit of nudity and some mild violence it's not nearly as outrageously sleazy as Candles and is thus completely eclipsed by that film as far as Satantic sexploitation cinema goes. Instead, what we have here is a meandering tale with a memory half life of about 10 seconds and no real payoff. It's badly written, needlessly confusing and Stelvio Cipriani's score peaks during the first sequence. The film was retitled in Spanish-speaking countries to try to cash-in on THE EXORCIST and never saw the light of day in America on a home viewing format until the recent DVD release.
★1/2
Posted by The Bloody Pit of Horror at 1:40 PM No comments: