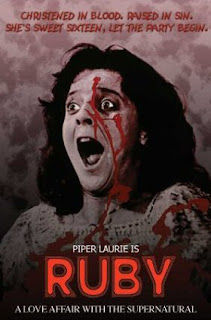 Directed by:
Curtis Harrington
Stephanie Rothman
At a foggy Florida bayou circa 1935, gangster's moll Ruby Claire (Piper Laurie, fresh from her Oscar nominated portrayal as everyone's favorite nutty religious-fanatic momma in CARRIE), witnessed her boyfriend getting gunned down by an armed posse. Sixteen years later, at a drive-in, owned and operated by Ruby and her ex-convict friends, the evil ghost of her slain suitor shows up and starts killing everyone. The movie is set in 1951, but the main attraction is at the drive in is ATTACK OF THE 50-FOOT WOMAN, made in 1957, and not released until a year later. This one spends its first hour wallowing in silly murder scenes, sometimes successful attempts at local color and seedy atmosphere, with Laurie camping it up in near constant hysterics, before a creepy EXORCIST-like possession of Ruby's mute daughter (excellently played by Janit Baldwin) finally adds a much needed jolt of real horror. Also in the cast are Stuart Whitman as Ruby's lover (he's also one of the original gunmen responsible for slaying Ruby's boyfriend years earlier), Roger Davis as a parapsychologist, Crystin Sinclair (Hooper's EATEN ALIVE) as an obnoxious teenage tart and Len Lesser. "50 Foot Woman" star Allison Hayes, who sadly passed away from blood poisoning the year this was made, also gets a shout-out in the credits.
Most of the movie was done by underrated director Curtis Harrington, but the producers were unhappy with his final cut and brought in Stephanie Rothman in to re-film and add additional scenes, which were mostly dialogue driven. The endings also differ; the VHS version contains newly-added material, while the DVD version carries Harrington's original ending, that was used in the theatrical release. The make-up consultant was Joe Blasco.
★★
Posted by The Bloody Pit of Horror at 9:01 AM