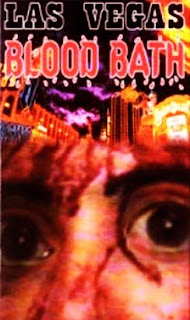 It doesn't get much worse than this. Businessman Sam Butler (Ari Levin) is in Sacramento on business and decides to go back to his Vegas home early to surprise his wife Ruth (Elizabeth Anderson). Instead, he's the one surprised when he finds out she's screwing a policeman. Sam picks up a gun, shoots them both (offscreen), decapitates his wife (also offscreen) and then mumbles "All women are alike. They just don't deserve to live!" before hitting the Las Vegas Strip in search of "whores" to murder. He picks up a hooker, takes her behind a dumpster, rips off her top, stabs her through the chin and then rips her leg off with his car. He takes his wife's head into a bar, where he shoots the bartender. He then shoots off a guy's middle finger while he flips him off and smashes another guy's head in with a shovel. And for an encore he stalks a bunch of big-haired female oil wrestlers in bikinis giving a baby shower for their pregnant friend, who, according to her friends, actually is a whore. The women are all members of "B.L.O.W." (!), the "Beautiful Ladies of Wrestling" and they even have their own TV show.
Sam barges in, makes one of the girls tie the other ones up with rope and duct tape and then kills them off one by one. The pregnant one is taken upstairs first, has her breasts pulled out and then has her stomach sliced open. Sam then pulls her baby out and throws it against the wall. Another of the girls is dragged upstairs and drilled through the forehead. Others are shot, killed with a hammer and have their arm yanked off. A Jehovah's Witness stops by to get decapitated when the killer karate kicks a door, and finally a policeman pops in for the big surprise ending.
It's stupid, nearly plotless, was shot with a consumer grade camcorder (from all indications no attention was paid to picture, lighting or sound), has some of the worst amateur acting you'll ever see, awful one-liners and is full of cheap gore effects, a few of which admittedly aren't bad for a homemade production such as this. Most of the cast members act like they're not the least bit interested in being in the film and don't even bother trying to show emotion even as they're being attacked and killed. I've seen a few claim this is (or should be) a cult classic, but some people will say that about anything that's cheap and moronic. The biggest laugh I actually got out of the whole thing was during a Vegas street scene when an old woman walking by smiles and waves at the camera.
To my knowledge, this was initially distributed solely in the Vegas area, but then it received an official VHS release from a small company called Burning Moon in 1997. Now it's a DVD fixture on budget packs released by Mill Creek/Pendulum Pictures. The run time is only 67 minutes.
NO STARS!
Posted by The Bloody Pit of Horror at 1:07 AM 2 comments: