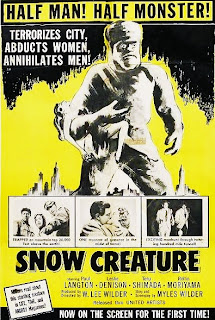 ... aka: Terror in the Himalayas


Botanist Dr. Frank Parrish (Paul Langton), along with boozy photographer Peter Wells (Leslie Denison), travel to Shekar, a small village at the base of the Himalaya Mountains. There, they hope to discover and study rare plants growing in the rugged terrain for The Corey Foundation. They enlist the aid of Subra (Teru Shimada); the only English-speaker in the area, as their guide, and hire ten other locals, referred to by our narrator as "human mules" (!), to carry the heavy equipment. The expedition then scales the Himalayas and a base camp on flat ground is established. Meanwhile, back in the village, Subra's wife is scooped up and carried off by a Yeti; which we're told means "Creature of Snow" in the native dialect. Subra's brother Leva (Rollin Moriyama) organizes his own group to scale the mountain and find the expedition. Once he does, he informs Subra of his wife's abduction, but neither Dr. Parrish nor Peter believe them. Irregardless, both men are stripped of ammo and pretty much forced to move higher up the mountain in search of the fearsome beast. 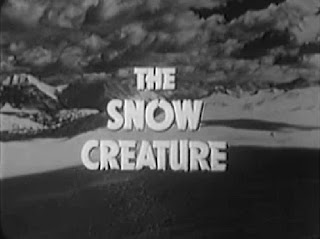 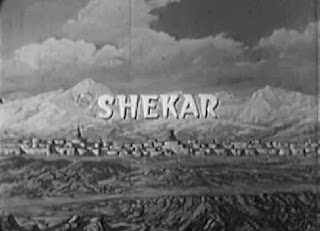 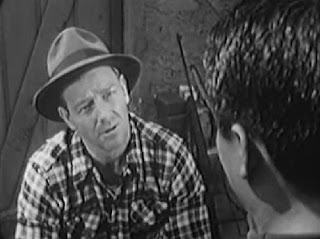 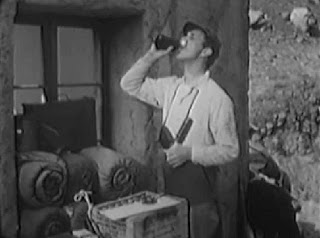 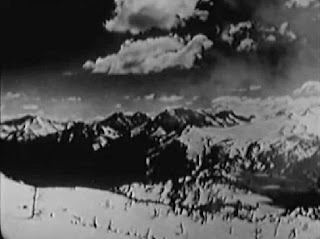 Subra shoots the radio machine so our heroes cannot call in for help, as the group follows Yeti tracks to a higher elevation. Soon, one of the men is found dead outside their camp and the Yeti shows up again to cause an avalanche. After many long walks, the men finally find a huge cave system and set up camp there. Subra discovers his wife's necklace inside and orders a thorough search, which uncovers a male Yeti, a female Yeti and a baby Yeti. A cave-in accidentally caused by the male kills the female and baby, but the male manages to survive. Frank gets control of the gun, gives the injured creature a shot of sedatives and orders Subra and his men to help haul the creature out of the cave and back down the mountain. He then leads the party directly to the police and has them take care of the Yeti ("And, uh, can you give him an injection every six hours?") while he's away in Bombay making further arrangements. 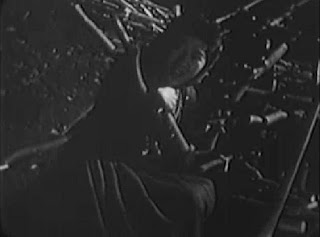 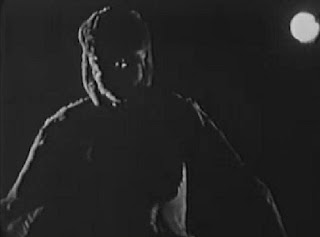 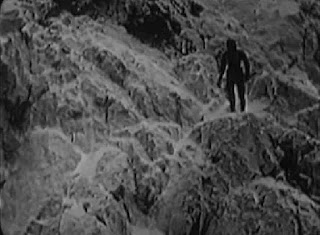 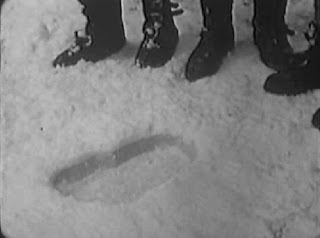 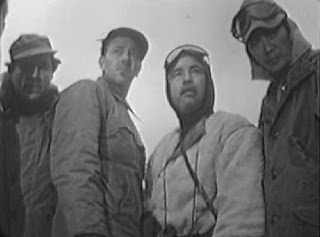 Soon, Frank and Peter are in a heated disagreement about what to do with their find. Frank wants it to go to the Corey Foundation, while Peter would rather make money off of it. Frank gets his way and the beast is put in a telephone-booth-sized refrigerator unit and shipped to California. Upon arrival, Frank is greeted by his wife Joyce (Darlene Fields), his boss Mr. Corey (George Douglas), a grand total of two reporters and an immigration officer (Robert Bice) who asks for the beasts' papers (!!) After all, is it really a man or is it a beast? And besides, the last thing this country needs is yet another illegal immigreti running loose. They call in anthropologist Dr. Louis Dupont (Rudolph Anders) to run tests to find out more, but he doesn't have a chance. Put under the watchful eye of just one security guard, the beast manages to tip its unit over by rocking it back and forth, punches the guard over the head in a hilarious scene and then escapes. 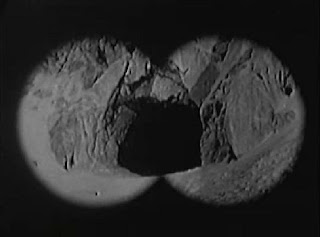 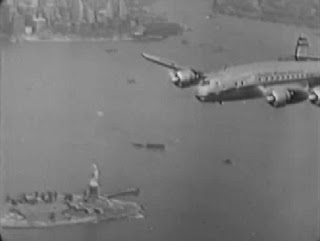 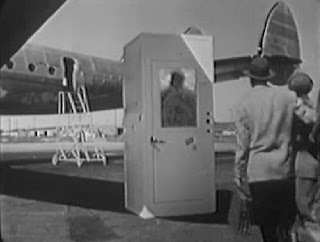 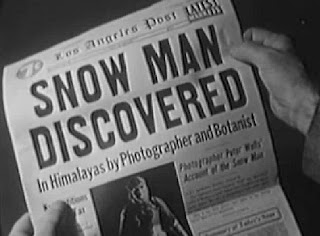 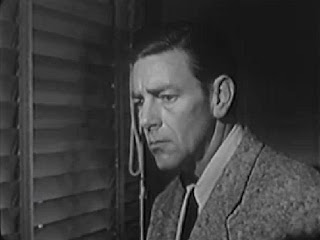 One woman is killed (off-screen), so police Lieutenant Dunbar (William Phipps) is put on the case. He sends out a radio bulletin ("A dangerous killer beast is at large!") warning citizens not to leave their homes at night. The Yeti scares another woman, heads to a meat packing plant to cool off and get a bite to eat and has been hiding out in the sewers, where the big finale takes place. All of the scenes taking place in America are very reminiscent of MONSTER A GO-GO (1965) and if you've ever seen the inept yet excruciatingly boring Monster you know that's a very bad thing indeed. Despite endless scenes of people walking around and scaling a mountain, poor matte work, lame narration and our leads behaving like arrogant douche bags with an obnoxious Western superiority complex throughout, the first half is slightly better than the second, which plumbs depths of dull and inept not too often seen. 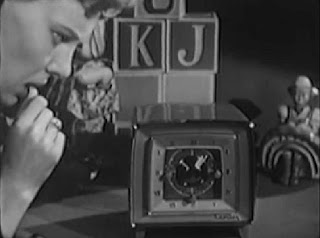 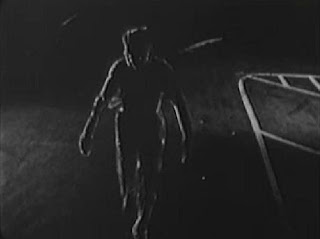 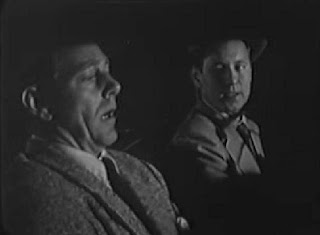 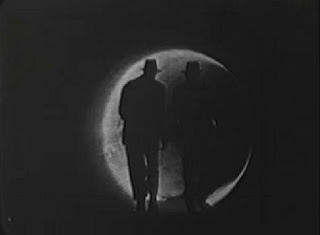 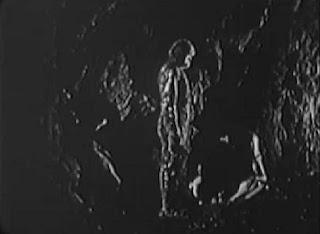 Though this may be historically important as the first ever Yeti movie (Jerry Warren's Man-Beast [1955] and Val Guest's The Abominable Snowman [1955] soon followed), the editing is terrible, the acting's poor, the dialogue's even worse and there's poor use of stock footage used throughout. The plane shown transporting Frank and the precious cargo to Tibet from American and back is a silver military jet but when it finally arrives to its destination it's suddenly a white TWA passenger plane. As far as the monster is concerned, it barely gets to do anything and is impossible to make out in the extremely dark light in which it is always cast. They apparently didn't shoot enough footage of it, so the same exact shot of the beast walking toward the camera is repeated endlessly. When they needed the creature to stop they simply froze the same shot mid-motion and when they needed the creature to retreat they simply reversed the shot. This is done dozens of times. 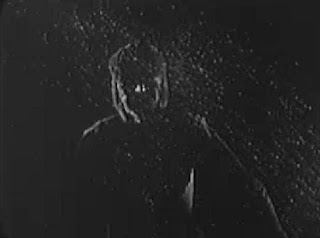 Director W. Lee Wilder (using a script from his son Myles Wilder) shot this the same year his brother Billy made the hit romantic comedy Sabrina (1954) starring Audrey Hepburn and Humphrey Bogart. The less-famous Wilder brother also made PHANTOM FROM SPACE (1953), KILLERS FROM SPACE (1954), Fright (1956), THE MAN WITHOUT A BODY (1957), BLUEBEARD'S TEN HONEYMOONS (1960) and The Omegans (1968). Snow Creature is by far the worst thing I've seen from him.