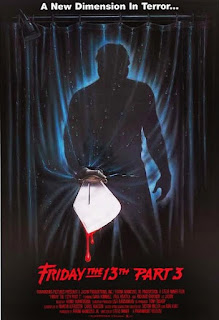 
After FRIDAY THE 13TH (1980) became an unexpectedly huge hit and FRIDAY THE 13TH PART II (1981) did well enough the following year (though it grossed only around half of the original), Paramount originally planned to end the series right here. And they very well may have seeing how the studio generally hated these movies and the critical scorn they received for releasing them... had this not done so remarkably well in theaters. Friday III almost managed to match the box office of the first, raking in over 36 million dollars domestically. It was the second highest-grossing horror film of the year behind only Poltergeist, easily outperformed other franchise sequels like Halloween III and Amityville II, made nearly three times more money than Carpenter's heavily-promoted and much more expensive THE THING (1982) and ultimately ended up becoming the highest grossing of the entire original run of Paramount sequels despite the fact it opened in fewer theaters than any of the others. Boosting its figures considerably was the astute decision to release this entry with a special gimmick. Noting that 3D, which had been dead for quite some time until the early 80s, managed to turn an otherwise truly awful Italian / Spanish western called Comin' At Ya! (1981) into a box office success the previous year, the producers invested a large chunk of money developing a special 3D process for this film. In fact, more money was spent on the 3D cameras and lens and then equipping theaters with the ability to actually play the film in 3D than what it cost to produce the film itself! Friday III is also noteworthy as the very first 3D film to ever receive a wide theatrical release. 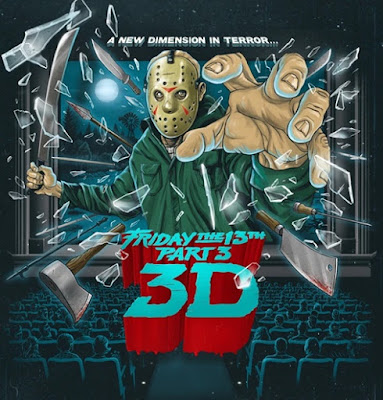 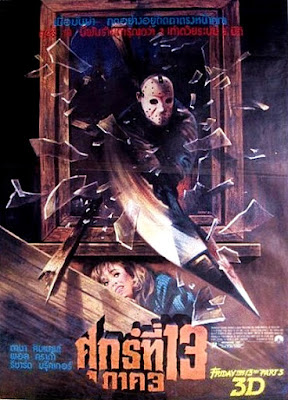 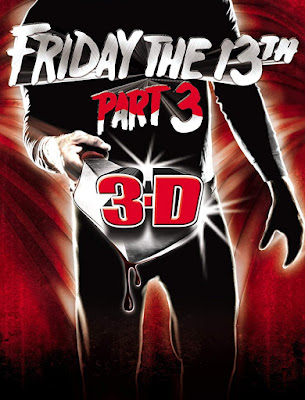 This entry also establishes two other staples of the long-running series. First, this is the start of Jason as an indestructible killing machine i.e. something not quite human. It's strongly suggested in the original that his emergence from the lake at the very end is merely a delusion in the mind of the traumatized sole survivor. Part II proposes the theory that his drowning in the lake was merely a local legend and he's been living in the woods undetected all that time. Jason is essentially portrayed there as a big, disfigured backwoods psycho who can withstand some bodily trauma though appears to be mortal. Here, however, Jason not only is up and running virtually unscathed after receiving lots of damage in the previous entry, but is mangled beyond what any normal human could withstand yet survives. His reemergence in the morgue at the beginning of Part 4 would finally solidify Jason as being a virtually indestructible, zombie-like killer. But. most notably, this is the entry where Jason receives his trademark hockey mask, which he dons in every sequel from here on out. 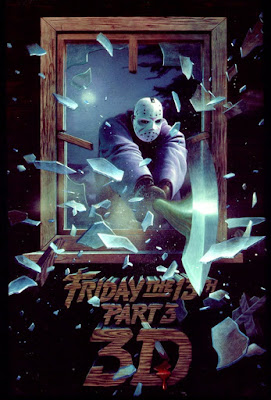 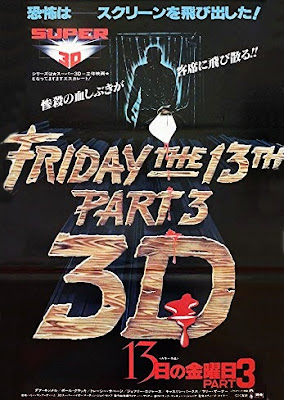 Things open with a five minute recap of the previous film (though ignoring its final few scenes) as Ginny (Amy Steel) runs into Jason's shack, finds his mother's severed head and then sinks a machete into Jason's shoulder. However, he manages to survive and it's off to redder pastures. As news reports of the previous slaughter play out on TV, Jason kills a slob general store owner with a cleaver to the chest then sinks a knitting needle into the back of his wife's head. We then meet our principle fodder. There's the cute but uptight Chris (Dana Kimmell), who is returning to the Crystal Lake area for the first time since she was as a teenager, Chris's pregnant best friend Debbie (Tracie Savage), Debbie's boyfriend Andy (Jeffrey Rogers), Andy's insecure, horror-obsessed prankster roommate Shelly (Larry Zerner), Shelly's way-out-of-his-league blind date Vera (Catherine Parks) and stoners Chili (Rachel Howard) and Chuck (David Katims). After having to eat a bag of weed when they think the cops are going to pull them over, catching sight of paramedics hauling body bags out of the general store and running into a crazy bum (David Wiley) who warns them of impending doom, they finally arrive at Higgins Haven for a relaxing (a-hem!) weekend vacation.

Already waiting for them there is Chris' former boyfriend Rick (Paul Kratka), who'd like to rekindle things except for the fact Chris is a wee bit frigid from being attacked in the woods by Jason (Richard Brooker) several years earlier. Some series fans seem to have an issue with this story angle for several reasons. First, seeing how this attack has prevented Chris from being intimate with her on-and-off boyfriend, we're to assume this attack was sexual in nature. Second, Chris passes out during the attack yet Jason lets her live. While neither of those concepts fit Jason's usual m.o. of slaughtering everyone on sight, we need to remember this was made at an early stage in the series and before things became almost comically formulaic. Personally, I found this a bit more interesting than the two previous films, which presented us with a heroine confronting Jason by sheer coincidence. In contrast, the lead here consciously returns to the scene of her assault specifically to try to overcome a past trauma so she can move on with her life. After all of her friends are killed and her would-be beau (who seems less interested in her than he is getting into her pants) fails to protect her, she's forced to confront her attacker all on her own.

Many series fans seem to prefer the previous entry over this one, but not me. The characters are a little less cardboard, a little more likable and have a little more personality and definition to them. I especially enjoyed the dynamic between the Shelly and Vera characters that develops over the course of the film. Next, there's a bit more humor, wittier dialogue and a slightly campier and more free-spirited vibe to the whole thing, which makes it more fun on a re-watch. Finally, this delivers a higher body count than either of the previous movies and there are a wider variety of kills. As an added bonus, the best ones weren't even stolen from Mario Bava's A BAY OF BLOOD (1971)! The most memorable bit is when a guy walking on his hands is split down the middle with a machete. We also get a stabbing from underneath a hammock (a nod to Kevin Bacon's death in the original), a head squeezed until the eyeball pops out (which admittedly probably looks a lot better in the original 3D presentation!), a hand lopped off, a neck slashing, an electrocution and killings with pitchforks, a wrench, a red hot fire poker and a harpoon gun.

Even though Kimmell does a fair amount of shrieking and running around, her character is also surprisingly aggressive at times and wily enough to try to ambush and trick Jason at various points. She also has no issue going right after him with whatever weapons are available to her! She topples a bookcase over onto his head, stabs him repeatedly, hits him over the head with a piece of firewood and a shovel, hangs him and, finally, plants an axe in his skull. The last 20 minutes are basically a prolonged chase scene, but fairly well done and suspenseful all the same.

Prior to appearing in this, Zerner wasn't an actor at all and was discovered on a street corner by the writers so the fact he contributes one of the more endearing performances is a surprise. Parks, a former Miss Florida and first runner-up in the 1977 Miss America Pageant, is very appealing and I'm surprised she didn't have much of a film career after this. But it was Savage, a former child actress (and regular on the very first season of Little House on the Prairie), who would go on to become the most recognizable face. After appearing in this, she completed her degree at the University of Michigan, began doing local TV news and then went on to become an Emmy-winning reporter and newscaster out of Los Angeles covering such high profile events as the Oklahoma City bombing and the O.J. Simpson and Heidi Fleiss trials. She also provides the sole flash of flesh here during a shower scene.


Part III was made by the same director / producer (Frank Mancuso Jr.) team as the previous entry and also has another familiar Harry Manfredini score, which is spruced up a bit with a disco-tinged (!) opening and closing theme song. The Make-Up Effects Lab did the fx this time out while Martin Kitrosser, script supervisor on the first two films, co-wrote the screenplay with wife Carol Watson, which was then re-written by Petru Popescu. The cabin and barn sets, and even the lake, were built specifically for this film and were later reused for the slasher TWISTED NIGHTMARE (1988).