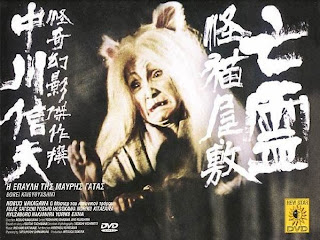 aka:
Black Cat Mansion
aka:
Mansion of the Ghost Cat, The
Directed by:
Nobuo Nakagawa

Tokyo-based doctor Tetsuichiro Kuzumi (Toshio Kuzumi) decides to move to a small town with his ailing wife Yoriko (Yuriko Ejima), who's suffering from tuberculosis. Eager to get away from the hustle and bustle of city life, and thinking the fresh air and solitude will do his wife some good, Tetsuichiro decides to move into a large mansion owned by Yoriko's family, which has been uninhabited for years and is rumored to be haunted. He opens up his clinic there and begins seeing local patients, but his wife keeps seeing visions of a black cat and an old, white-haired woman lurking around. Their dog is killed and the old woman attempts to strangle Yoriko several times. The doctor and his brother-in-law Kenichi (Hiroaki Kurahashi) go to a priest for help and learn that the home is cursed. The priest then relates a story going back many years to the former occupants of the home.
The period scenes involve samurai Lord Shogen (Keinosuke Wada), who's basically a prick who abuses his power and tries to kill anyone who angers him. A young man named Kokingo (Ryûzaburô Nakamura) is hired to teach the Lord a game called Go but is killed after calling out Shogen for cheating. The Lord later rapes Kokingo's blind mother, Lady Miyagi (Fumiko Miyata), who returns home, curses the entire family and then kills herself. Using the guise of Shogen's elderly mother (Fuji Satsuke), the spirits of those wrongfully killed enact their revenge against the Lord, his son (Arata Shibata) and servent girl Yae (Noriko Kitazawa). The only one spared the wrath is faithful servant Saheji (Rei Ishikawa), who apparently moved on to start his own family. Guess who Yoriko and her brother are descendants of?
Though not nearly as dramatically strong as the director's other supernatural tales, this manages to seperate itself by sandwiching the period-set revenge story in between one set in contemporary Japan. One thing that's not the least bit diminished is Nakagawa's visual eye. There is a lot of great, innovative camerawork on display here, which is very sophisticated for the time. The film opens with one continuous unbroken POV shot of someone with a flashlight walking through dark hospital corridors, finding a corpse on a stretcher, going up some stairs and then closing in our protagonist. There's also an amazing shot that follows a stream of tricking water to darkness, rises up through some brush to show a crow on a tree branch and then dips back down to slowly follow characters through a gate, pushing branches out of the way as it goes. Another visually striking scene involves a montage illustrating Shogen's descent into madness as he's seen furiously swinging his sword around while bold colors flash behind him. Strangely, the contemporary scenes are all shot in black-and-white with a slight blue tint, while the period scenes are done in a muted Eastmancolor.
The presentation of the possessed grandmother is pretty memorable, too. She takes on a cat like appearance (with fangs and pointy ears that spring up from beneath her crazy white hair) and cat like behavior (clawing people, lapping up blood and eating raw fish). How she's able to reel her victims in, so the speak, is exaggerated mimicry influenced by kabuki theater choreography.
.
It was adapted from a Sotoo Tachibana novel by Jiro Fujishima and Yoshihiro Ishikawa, who'd later go to write GHOST CAT OF OTAMA POND (which Ishikawa also directed).
★★★
Posted by The Bloody Pit of Horror at 11:05 PM No comments: 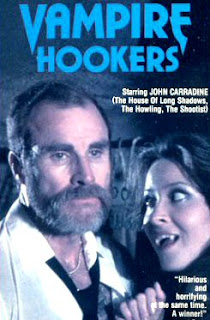 American sailors Tom Buckley (Bruce Fairbairn) and Terry Wayne (Trey Wilson) are looking for a wild time while on leave in Manila. They get drunk, gets into a bar fight, are tricked into eating unborn duck by some locals, encounter some transvestites in a disco club, try to pick up some hookers and almost get mugged. Another sailor, Taylor (Lex Winter), wanders off with one hooker named Cherish (Karen Stride), and doesn't return. As the two men look into his disappearance, Tom is led to a big cemetery and ends up finding a secret stairway leading to an underground crypt where worldly, Shakespear-quoting vampire count Richmond Reed (John Carradine) resides. Richmond uses his three attractive female vampires; Cherish, Suzy (Lenka Novak) and Marcy (Katie Dolan), to lure men there. His tubby, retarded henchman Pavo (Vic Diaz) also wants to become a vampire but hates the taste of blood and has a bad case of flatulence. Meanwhile, Terry tries to locate his buddy.
Embarrassing, juvenile horror comedy derives most of its humor from terrible dubbing, which admittedly is pretty funny at times. The rest is a series of pea-brained gags, fart jokes, awful one-liners ("Coffins are for being laid to rest... Not for being laid."), hammy overacting and a neverending, slow motion scene where Tom beds down with all three hookers at once. That scene provides plenty of nudity by the female stars, the sets in the vampire lair are pretty good and there's a great theme song ("They're vampire hookers... and blood is not all they suck...") over the end credits, but that's really about it.
.
Cirio Santiago had a very long career as a producer and director that lasted over fifty years until his death in 2008. He was involved in the productions of well over 100 films (mostly action; including 20 for Roger Corman) and owned and operated his own movie studio (Premiere Productions) in Manila. Screenwriter Howard R. Cohen went on to make the equally unfunny SATURDAY THE 14TH horror parodies. Emmett Alston, who'd go on to make the awful NEW YEAR'S EVIL (1981) and the very fun DEMON WARP (1987), was the production manager.
Many cheap-looking prints of this one are floating around. Your best bet is going with the 2008 BCI Eclipse release. It's a nice quality print and they've paired it with the Paul Naschy film COUNT DRACULA'S GREAT LOVE (1972).
★
Posted by The Bloody Pit of Horror at 3:21 PM 3 comments: 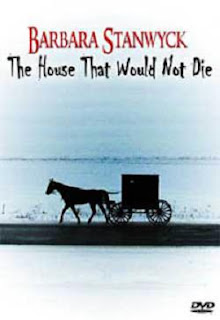 Competent, but very forgettable, made-for-TV haunted house/ possession tale, based on Barabra Michaels' novel Ammie, Come Home. Ruth Bennett (Barbara Stanwyck) and her beloved niece Sara (Kitty Winn) move into a very old country home that belonged to a distant, reclusive relative that Ruth hardly knew. Things look up for both ladies as they quickly find potential romance; Ruth with next-door neighbor Pat McDougal (Richard Egan), a college professor, and Sara with Stan Whitman (Michael Anderson, Jr.), a college student. Pat's sister (Mabel Albertson) gets permission to bring psychic Madame Sylvia (Doreen Lang) over to the home for a seance and soon after several of the characters start behaving strangely. Sara freaks out during the seance and tries to strangle her aunt later that night, but can remember nothing by the next morning. Pat becomes violent and sexually aggressive. A painting falls into the fireplace, sudden gusts of wind open and close doors and a male voice can be heard calling out from the garden...

Ruth and company begin researching the history of the home and eventually uncover a few dark secrets hidden in the family closet. Around two-hundred years earlier during the Revolutionary War, a general and his daughter lived there. The general, a traitor siding with the British during the war, was threatened to be exposed by the girl's soldier boyfriend after the general forbids the two to marry. So what horrible things happened to the three of them? Whatever it is, it's likely located right behind a boarded-up door in the cellar. Sara is periodically possessed by the girl and wants to expose the secret, while Pat is sometimes possessed by the general, who tries to make sure no one finds out what really happened.

The cast is fairly decent, but the storyline is incredibly predictable and the chills just aren't there for the most part, though nostalgic viewers who saw this one as kids seem to look at it through rose colored lenses. One senses Henry Farrell (WHAT EVER HAPPENED TO BABY JANE?), who adapted the book, may have had to tone things down a lot for the tube, as there's some hinting toward childhood sexual abuse here. Stanwyck, who also appeared in William Castle's THE NIGHT WALKER (1964) and the TV-movie A TASTE OF EVIL (1971), injects some class into the proceedings for what's it worth. Winn (billed as Katherine Winn) would go on to win the Best Actress prize at Cannes for PANIC IN NEEDLE PARK (1971), play Ellen Burstyn's personal assistant in THE EXORCIST (1973), appear in the 1977 flop follow-up, EXORCIST II: THE HERETIC and then basically threw in the towel on her acting career to raise a family.

Released to VHS by both Worldvision and Guild Home Video, but there's no official DVD release. Aaron Spelling was the producer and it was an ABC "Movie of the Week."