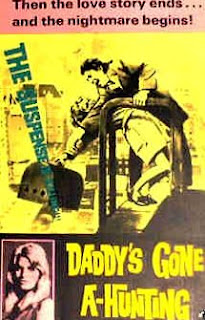 Directed by:
Mark Robson
Director Robson is held in pretty high regard by most horror fans and film historians for his contributions to the highly influential Val Lewton produced horror cycle of the 1940s. Over twenty years after such acclaimed genre picks as THE SEVENTH VICTIM (1943) and BEDLAM (1946), he made this little-known psycho-thriller that deserves a second chance at life, not to mention a fan following (to my knowledge there's not DVD release as of this writing). Young Brit Cathy Palmer (Carol White) has just arrived stateside and is looking to make a fresh start in San Francisco. Almost immediately upon arriving, she runs across handsome Kenneth Daly (Scott Hylands), a charmer whose idea of making a good first impression involves nailing her in the back of the head with a snowball. Ken shows her around, takes her to dinner and uses his connections to help her land a good job at an ad agency. Eventually, the two are living together, but various red flags are making Cathy question their relationship. Ken is immature, aimless, can't seem to hold onto a job (and can't decide whether he wants to be an actor or a photographer) and is cruel to her pet cat. Aside from that, she senses there's something else not quite right about him. Fed up, Cathy decides to end the relationship. One problem; she's pregnant. Her co-worker Meg (Mala Powers) helps her arrange an abortion through gynecologist Dr. Parkington (Dennis Patrick). Things go off without a hitch, except Cathy decided to go through with the procedure without informing Ken.

After he slaps her across the face in a crowded restaurant, Cathy moves on with her life and wants to put the whole experience behind her. She meets and eventually marries Jack Byrnes (Paul Burke), a successful and wealthy lawyer who's well on his way to becoming a powerful (conservative) politician. Cathy becomes pregnant with Jack's child. Just when things are looking up for her, Ken comes back into the picture, a little unhinged and looking for revenge... He stalks her, blackmails her and weasels his way into her new home, kills the doctor who performed the abortion and otherwise makes her life a living hell. After she gives birth, he demands she kill her new baby to make up for the fact she "murdered" his. When this doesn't happen, he kidnaps the baby and tries to manipulate Cathy into killing it using various clever and sadistic methods may startle even modern viewers.Some people seem to think this film is pushing a certain agenda, and maybe it is to a degree. Oddly, some see it taking a Pro Life stance, while others see a Pro Choice stance, which is a testament to how well made the film actually is. Both sides of the abortion debate are touched on and they're covered in a realistic and matter-of-fact way thanks to the intriguing and non-preachy screenplay from horror master Larry Cohen (IT'S ALIVE) and Lorenzo Semple, Jr. (PRETTY POISON). When Cathy goes to get her abortion it's done secretly, but not in some grimy back alley like you usually see, but a brightly lit clinic by a respectable doctor. Cathy seems somewhat haunted by her decision and hesitant to tell the truth about it for fear of the social stigma surrounding her decision. She's also afraid of being thrown out by her politico husband, but her husband turns out to be completely supportive and non-judgmental about it when she's forced to reveal the truth. The only one coming down on her and labeling her a "murderer" is Ken himself, and he's out of his mind. Make what you want of that.

The cast includes James B. Sikking, Walter Brooke, Edith Atwater, Andrea King and Suzanne Somers as an extra. It was made four years before the landmark Roe vs. Wade Supreme Court decision (in 1973), so the subject matter was probably quite risqué for the time. Some of the psychological torment Ken puts Cathy through is also pretty strong stuff for 1969, especially to people who hate seeing defenseless infants put in harm's way. Be forewarned that it's slow to get started, but when it finally picks up about half-an-hour in it's shocking, very suspenseful, somewhat horrific and even thought-provoking. In my opinion, it's good enough to deserve a decent DVD release from a respectable company and good enough to deserve a reevaluation from critics, mystery/thriller fans and horror film buffs. It's always interesting to trace back genre conventions to see just what movies have influenced other, more popular films. Many of DGAH's themes actually pre-date the highly influential PLAY MISTY FOR ME (1971), which went on to influence dozens of popular psycho-thrillers to come.
Score: 8 out of 10
Posted by The Bloody Pit of Horror at 8:46 PM