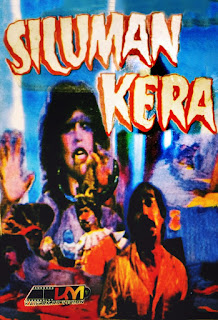 
Here's a fantastic choice for your next Asian schlock movie marathon! Biologist Johan Giru (Advent Bangun), his pregnant wife Sophie (Tiara Jacquelina) and their four man crew (Dede, Parno, Sabar and Parman), who are doing research into a sudden decrease in the monkey population, are traveling around to various places in the Pacific when they stumble upon an uncharted and, they think, uninhabited island. One of the crewman then reveals this may be called legendary Lafayeti Island; a place rumored to only show itself long enough to lure in potential human sacrifices. Not to be taken in by local superstition, Johan and company decide to camp out there for the night to do additional research. After retiring to bed, Sophie is hypnotized by a tribal doll they'd previously fished out of the water and walks off into the brush. And then crewman Parman is lured away from camp by a village girl. A puff of smoke later, he's being killed by a hairy, silly-looking monkey monster. The men find his body and bring it back to camp, then set out to find the missing Sophie. While they're away, a time lapse melting effect occurs over the victim's leg and he rises as some kind of infected zombie.


Sabar is the next unfortunate to have an encounter with the creature and gets strangled with a disembodied arm before having his leg ripped right off. The monkey demon flips in the air, punches and kicks and its dried-leaf moo moo even acts as a kind of body armor that can deflect bullets and sharp weapons. After getting his ass handed to him by the monkey, Johan makes his way to the tribe's village just in time to see his wife getting put through a ceremony that involves having fresh blood poured over her face and their upcoming child being earmarked as a future sacrifice. Somehow, he ends up back at his camp the next day unharmed. Sophie is also there and has no recollection of the night's events after going to sleep. The rest of their crew are never seen again but Johan makes sure to burn the evil doll before the two head back to civilization.

Many years pass and the wealthy Johan and Sophie have raised their now-teenage daughter Luciana (Alba Fuad) without incident. That is until she reaches her seventeenth birthday and many strange things start occurring. Johan has visions of the hip-thrusting tribal leader (who speaks in a high-pitched, electronically-altered voice for some strange reason) lurking around the party. And then Luci receives a familiar-looking doll from her boyfriend Sanjaya (Barry Prima). Up until now Johan hasn't even bothered telling his wife that the tribe were planning on sacrificing their child once she reached adulthood (oops) but now the time has come and the monkey demon is back to claim his prize. Elsewhere in their home, the staff keep seeing visions of the monkey, including it bursting its head through a table and making a pudgy, shrieking woman (Illa Doth) fall backwards in her chair. Another sees old servant woman Darti ("Sudarti" / Sudarmi Suyadi) with a monkey face. And then Luciana makes an amazing transformation of her own!

While her parents are away, Luci sneaks Sanjaya into her Garfield-theme bedroom. As he's going down on her, the doll rises up and hypnotizes her. Time lapse effects cover her arms with hair and make her eyebrows bushy, she suddenly has crazy blue eye shadow and red lipstick, grows claws, spits up blood and then starts throwing Sanjaya around the bedroom. She climbs on the walls, karate kicks and punches him and makes him do 360 spins. After Sanjaya runs out of the bedroom, he calmly tells Darti to go check on her and then just nonchalantly leaves!

Having had enough of the haunting, servant Min (Krisno Bossa) calls in an Arabic ghost catcher / two bit con artist named Wan Abdulah, who comes with a trunk full of captured spirits and some garlic that he instructs must be hung over all of the doors and windows. However, the floating doll shoots a green laser to remove the garlic, the monkey demon flies to the front door as a fireball and is able to gain entry to the house. He kills Darti and chases Wan Abdulah into the bathroom. In the middle of the action, the fake shaman then decides to take a shower (!) with his clothes on (!!), which turns into a slime-bath when a bunch of yellow gunk pours out. He's chased around the house (with the monkey busting his head through a mirror and even the floor) and eventually ends up thrown into the swimming pool. While all that's going on and everyone's distracted, the doll and the tribal leader hypnotize Luciana and lure her away. Johan, Sophie and Sanjaya then enlist the aid of a powerful "ulama" (Islamic scholar), who transports them back to the island village for a final confrontation.

Dumb as Demon Monkey is - and it is very dumb - this is a delightful little mishmash of various entertaining nonsense. It's weird, bloody, silly, fun, action-packed, frequently hilarious (often intentionally so!) and managed to keep a smile on my face for 80 fast-paced minutes. And one really can't ask for much more from a low-aimer such as this. Cult star Prima receives top billing for what is essentially a supporting role. He doesn't even show up until 30 minutes in with his mullet / glam metal hair hybrid, heavy make-up and "cool" wardrobe like a studded leather jacket and a green and purple Esprit t-shirt. During the big finale he finally gets to show off his martial arts skills after getting pulled into some kind of parallel universe to battle the vampire-toothed "God of Gate" (Yoseph Hungan) and his two dwarf / doll minions.

Never released here in America and, to my knowledge, none of the early Asian VCD releases, like the one distributed by Karyamas Vision, were released in an English version. However, an OK quality version of this taken from the Indonesian Flik / UseeTV live streaming channel has been uploaded to Youtube with English subs if you're interested in watching it there. The director also made the horror-comedy Jeritan Malam / "Night Screams" (1981) aka Mayat hidup ("Living Corpse") about a woman infected by a blood transfusion from a brain-eating spirit.