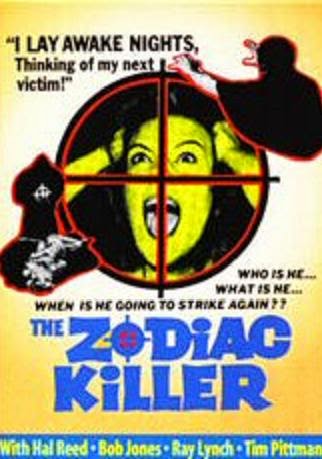 
The Zodiac Killer terrorized Northern California in the late 60s / early 70s, claiming at least seven known victims (though he himself claimed thirty-seven) and sending bizarre cryptograms to local newspapers that he demanded be printed or else he'd kill again. To this day, no one has been able to uncover his identity, but the killer and his crimes went on to influence many novels and just as many movies. Everything from the psycho hunted down by Clint Eastwood in Dirty Harry (1971) and Brad Dourif's "Gemini Killer" in Exorcist III (1990) to films ranging from David Fincher's big-budget and critically acclaimed Zodiac (2007) to Ulli Lommel's low-budget and critically-panned Zodiac Killer (2005) and Curse of the Zodiac (2007) bear the elusive psycho's mark. However, I believe this film (released to theaters in 1972) was actually the very first to directly address the crimes. Well, unless the porno The Zodiac Rapist, released the same year, somehow beat it to theaters. Interestingly, I've read several places that the producers made this in hopes of helping to catch the real killer; figuring he might frequent the showings and be apprehended! It's fascinating to think about, and I'd say it's pretty likely that the real killer (who kept in contact with the police until the later part of the 70s) did go see this at least once for a laugh. Hey, if someone made a movie about you, could you resist seeing it?

To wipe away any doubt that this is just a cheap, sensationalist attempt to cash in on tragedy (nice try), this opens with a letter from an honest to goodness San Francisco Chronicle reporter telling us that some of the scenes and dialogue may "seem strange and unreal" but the film's goal "is not to win commercial awards but to create an 'awareness of present danger.'" And to be fair, some scenes accurately depict the actual case, such as the how some of the murders are committed, the notes to the press, the cross / circle symbol, the killer writing on a car door and a couple of other elements. The rest is a mixture of gritty, taut murder scenes mixed with terrible amateur acting, some truly mean-spirited (yet hilariously delivered) dialogue and a psychological profile on what type of person the nutjob might be. Apparently the makers of this film speculate it's either an impotent, rabbit-loving mail carrier or a wig-wearing over-the-hill gigolo.
.
The younger of the two suspects, Jerry (Hal Reed), is a moody mailman who shrugs off female companionship to chill with his pet bunnies. The older one, Grover (Bob Jones), is a truck driver who is behind on his rent, hates his ex-wife with a passion, is extremely insecure about both his occupation and being bald and has a long criminal record. Grover lies about being a businessman and wears a wig to try to attract ladies with little success. During one scene, his date rips off his wife and angrily screams "I never met a bald-headed bastard I could trust!" Jerry just ain't all that interested. Grover wants split custody of his daughter and runs to the garage to get a hack saw when he's fighting with the ex. Jerry gets upset that rabbit stew is being served in a diner and carries around a fake rubber nose (?) in his travel bag. One of these fellas is the killer, but who is it? Your question will be answered sooner than you think at around the midway point. After that, the psycho basically just continues his murder spree and kneels down at a shrine while proclaiming "I am the Supreme Zodiac!"

A pair of detectives; Sgt. Tom Pittman (Ray Lynch) and Officer Ken Heller (played by, uh, Tom Pittman) investigate. The victims are mostly shot, but one couple are tied-up and stabbed, a guy has his ear cut off and an unfortunate elderly lady is hit over the head with a tire and then crushed when a car is dropped on her! Can't say that I was ever bored while watching this. In fact, I laughed. A lot. Not sure if that was the director's intention or not, but some of the sick humor is obviously intentional. The cast includes comedian Doodles Weaver, future Oscar-winning screenwriter Robert Towne (credited as "Robert Tubin") sitting at the bar and Richard Garrison (who later starred in The Crater Lake Monster).

The DVD is from Something Weird, who have paired it with THE SEX KILLER (1965) and ZERO IN AND SCREAM (1971) for their "Sharpshooter Triple Bill." Both of the other films also feature serial killers, but lean more toward "roughie" sexploitation than horror, while Zodiac has no sex and no nudity. 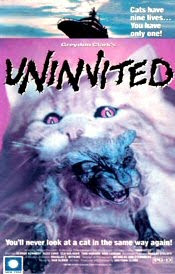 I have a couple of cats of my own and it seems like I'm constantly cleaning gunk up off the floor that's left behind by my furry little buddies. The fluffy orange kitty in UNINVITED has a similar problem... but instead of hacking up hairballs or excess food, it occassionally goes buck wild and pukes up a tiny-but-deadly mutant creature that's taking refuge inside its belly! Why? Dunno. But it did escape from a government research lab and the scientists there mention cancer research, which we horror fans know always spells trouble. As the cat runs around, some other shady things are going on at a resort area during Spring Break. A trio of murderous criminals; hard-assed grump Mike (George Kennedy), womanizer Walter (Alex Cord) and goofy drunk Albert (Clu Gulager, with a set of oversized dentures) swindle three million dollars and plot to get away on a yacht to be captained by a one-woman crew named Rachel (Toni Hudson). A couple of oblivious young bimbos - Suzanne (Shari Shattuck) and Bobbie (Clare Carey) - end up catching Walter's eye and he invites them to come along on the trip. The ladies, in turn, invite three other guys; Corey (Rob Estes) and Lance (Beau Dremann) and brainy Martin (Eric Larson), and right before they get on board the ship, they find the cat. Suzanne instantly falls in love with it and insist it come along, too. Mr. Kennedy isn't too happy about any of this. But then again, he never is.
.
Tensions mount between the criminals and the others after an attempted rape and things just get worse when mutant kitty starts attacking and killing everyone off one by one. Even a scratch from the little sucker leads to a nasty and fatal infection where the wounds pulsate and explode. Surprisingly, all this somehow managed to secure a PG-13 rating. Though there's no nudity or over-the-top profanity, the film does have enough violence and blood to seriously put its rating into question. Veins swell and squirt blood, fingers are bitten off, a face is melted off with hot steam and a neck and ankle get chewed up real good. Of the three veterans in the cast, two make an early exit, but Kennedy is pretty hilarious while he's around. Shattuck (previously seen in DEATH SPA) also seems to be having fun. Strangely, the two worst actors end up being the last two standing. Boo on that.
.
Still, for 80s cheese movie fans, the premise and handpuppet cat creature alone merit this a look. Director Clark (who also wrote, produced and has a cameo during the opening sequence) might not be a genre luminary, but he does come up with some amusingly absurd concepts (see also: SATAN'S CHEERLEADERS and WITHOUT WARNING). Austin Stoker appears in a small role. Dick Warlock and Spice Williams were stunt performers.
.
★ SBIG
Posted by The Bloody Pit of Horror at 8:03 PM 4 comments: