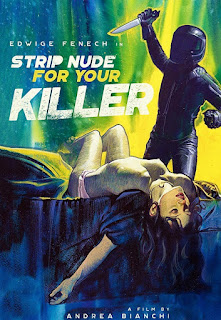 
Gotta love a title that just cuts right to the chase. Shame about the movie itself. A young woman named Evelyn goes to get an abortion but doesn't come home as the gynecologist accidentally kills her. He and an acquaintance then place her body in a bathtub to make it look like she accidentally drowned instead. Not long after, the doctor is attacked and killed outside his home by a knife-brandishing psycho dressed in a black leather duds, gloves and a motorcycle helmet. We then meet talent scout, photographer and all-around lothario Carlo Bianchi (Nino Castelnuovo). At a pool, he spots the statuesque, bikini-clad Lucia Gerosini (Femi Benussi) and stalks her to a bar where he brags about his credentials ("Harper's Bazaar! Vogue! Elle!") and then invites her into the sauna so he can examine her, uh, portfolio. Seeing how everything looks great, he takes her back to his modeling agency, Albatross Photo, where she meets the rest of his co-workers and some of the other models.


Albatross is owned by aggressive and extremely unpleasant lesbian Gisella Montan (Amanda) and her equally odious, 350-pound husband, Maurizio (Franco Diogene), both of whom use their modeling studio to try to get laid. Gisella immediately takes Lucia to her office so she can also examine her, uh, portfolio, while Maurizio takes another model named Patrizia (Solvi Stubing) on a romantic date that includes a red-lit lesbian stripper stage show. Not too surprisingly, the wife usually gets her way while the hubby always strikes out. In fact, he's actually a mother-obsessed virgin with an inflatable doll, which begs the question: Why exactly are these two even married in the first place? The other primary models on display are Doris (Erna Schurer), a flat-chested blonde without eyebrows, and the scrawny, mustachioed Stefano (Wainer Verri). Among the primary staff are flamboyant make-up man Mario Ferreri (Claudio Pellegrini) and photographer Magda Cortini (Edwige Fenech), who's still in the process of working her way up in the business.

For some reason that can only be attributed to possible career advancement, Magda is interested in dating sleazy and obnoxious man-whore Carlo and gets the ball rolling by seducing him in a darkroom and then going down where, well, probably a thousand wanna-be models, have gone before. His idea of a charming post coital conversation involves talking nonsense about molecules in milk making coffee taste better and, when she looks perplexed, informing her "It's stupid for me to explain. You don't understand a damn thing anyhow." That's followed by him putting his hands around her throat and threatening to strangle her over a newspaper article. Magda behaves like it's all nothing and is casually chatting it up with him just a few seconds later. At first I figured this must mean Magda is also the killer because only a psychotic would agree to date Carlo in the first place. Hell, I'd even try to explain that to her except I have a sneaking suspicion she wouldn't understand a damn thing anyhow.

We discover that the woman who died getting the abortion used to be an Albatross model and the motorcycle-killer is targeting only agency employees. He / she starts by taking out the gay make-up man. Next up is Lucia, who's been putting out for Gisella in hopes of improving her chances of becoming a successful fashion model. After the two have a spat - Gisella slaps her and calls her a "cheap whore" for having slept with Carlo (well, if the shoe fits...) - Lucia is stabbed to death after walking around the house completely nude for a good five minutes. Next up, Maurizio takes Doris on a terrifying high speed drive to a country house where he attempts to rape her and then threatens to bash her head in. She responds to that by taking off her clothes, lying on the couch and cheerfully agreeing to have sex with him. However, he's unable to perform. After she leaves, he whips out his inflatable girlfriend but gets killed before he can even fully pump her up. As all of this is going on, a police commissioner (Lucio Como) wanders in and out asking incredibly moronic questions.

I can't fault this one for false advertising as there is indeed a killer and indeed a lot of stripping nude. However, I can fault it for being a colossal failure on nearly every other front. While the nudity is gratuitous and nearly non-stop, there's little suspense and the mystery elements and killer reveal are so incompetently handled it's almost laughable. Though the killer isn't unmasked until the very end, a really clumsy clue at the very beginning narrows it down for us considerably. The killer is given a photograph of eight people and it's revealed they are also in the photo. Another person pictured is already dead. The person who gives the killer the photo is about to die. And prior to handing the photo over, the victim names four of the others off who are pictured. That leaves just two people that it could possibly be. One of the two is prominently featured up until this point then suddenly just disappears (almost if they want us to forget all about them for a little while...) while the other is barely shown at all. So, yeah, there's not much of a "mystery" really going on here.


So now that we have the plot being a bust out of the way, we should make mention of the painfully awful dialogue, the fact there is almost no directorial style to speak of and that there's not a single likable character in the entire film. Carlo has to be one of the most repellent leads I've ever seen in any of these films. He helps cover for the doctor after the botched abortion by staging it like a drowning (and probably was the one who impregnated her in the first place), uses every woman he runs across, strangles and berates his girlfriend and then threatens to rear-entry rape our heroine during the "funny" final scene... and the filmmakers behave as if he's the most charming guy in the entire world! The fact they let him live and don't castrate him like they do another character is a missed opportunity if there ever was one.

As far as the violence is concerned, most of it takes place off-screen and we just see the thick-red-paint-drenched aftermath. While most of the kills are stabbings, they throw in a few variations like a pair of ears, a breast and a wiener being removed, though that and all of the nudity don't do much to elevate this poorly-plotted, by-the-numbers effort. Strip was made toward the end of the giallo cycle when this type of film was falling out of favor with audiences and ideas and innovation were clearly in short supply. Increasingly more graphic sex films were popular though, prompting many directors to focus almost entirely on nudity as opposed to paying much attention to the mystery / horror aspects of these "thrillers." That seems to be the case here. While I can't say I personally had much fun watching this dumb, cynical film, some people seem to like it. 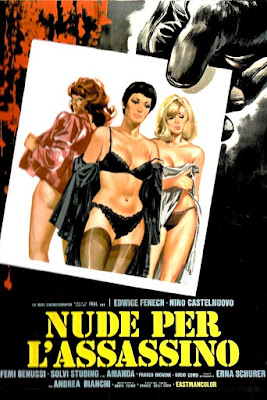 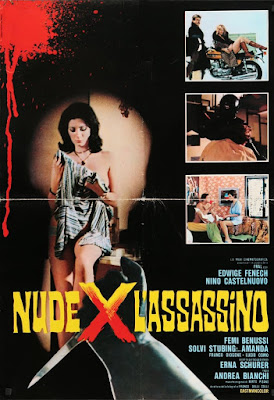 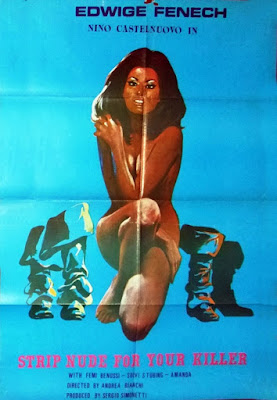 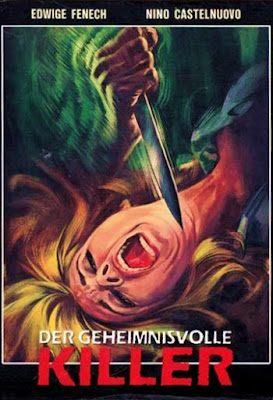 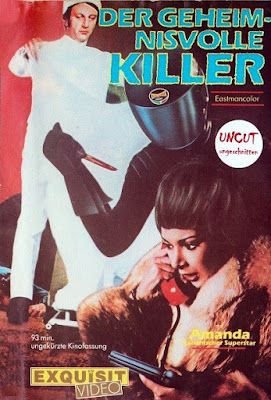 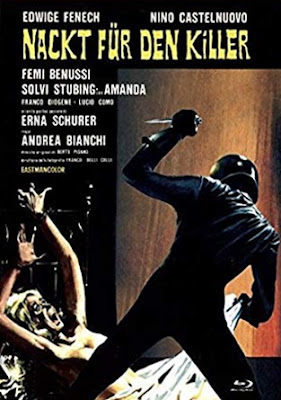 Bianchi, one of the sleazier Italian directors of his day, primarily made sex comedies, horror films and porn (both soft and hardcore). He was brought in to shoot additional and more exploitative scenes for the controversial What the Peeper Saw (1972) and also made the possession / sex film MALABIMBA (1979), which had more explicit X-rated inserts added to it so it could play in adult theaters, Angel of Death (1987), which involves Nazi scientists conducting experiments in a jungle and a couple of late 80s slashers: Maniac Killer (1987) and MASSACRE (1989). He will forever be best know however for his trashy zombie movie fave Burial Ground (1981).


To my knowledge, this title did not get an official U.S. release until Blue Underground put it out on DVD in 2005. An English-dubbed version was released theatrically in the UK, but had five minutes of violence and nudity removed.