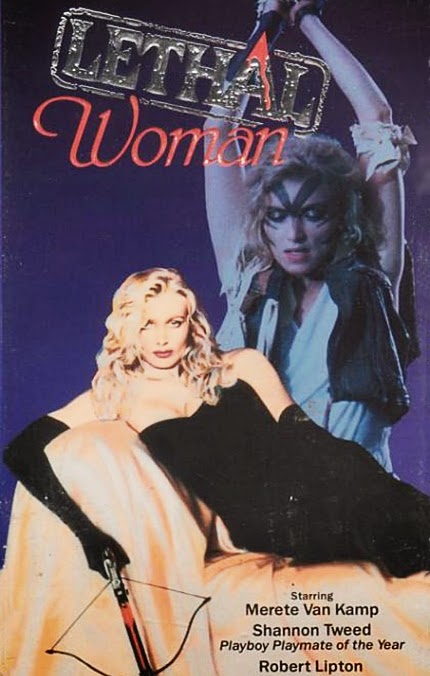 ... aka: Most Dangerous Woman Alive, The


The last movie I reviewed here was NOTHING UNDERNEATH (1985) starring Danish model-turned actress Renee Simonsen. Not long before that I watched HAUNTING FEAR (1990) starring Danish model-turned-actress Delia Sheppard. And now I've jumped right on over to something called Lethal Woman starring Danish model-turned-actress Merete Van Kamp. Coincidence, or do I have a secret fetish for Danish models? Well, only I truly know for sure and I'm not saying another word about that... though I will say that when I hear the name "Merete Van Kamp" I can't help but immediately think of canned beanie weenies. Ms. Van Kamp began her show biz career with the one-two punch of a small role in Sam Peckinpah's The Osterman Weekend (1983) followed by the title role in the well-publicized,  multi-million-dollar-budgeted, 3-hour-long, made-for-TV-movie Princess Daisy (1983). The latter, which was based on a best-seller by paperback potboiler queen Judith Krantz, was a big deal at the time, garnering its rising star a coveted cover issue of TV Guide plus a lengthy spread in People Magazine. So how was Merete received in her first big starring role? Well, a reviewer for The Guardian noted that "... Merete Van Kamp as Daisy cannot act at all. I don't mean that she acts badly, simply that she appears incapable of putting one expression in front of another." Ouch. Undeterred by that little setback, Merete landed one season of Dallas in 1985 and then, well, not much else after that. By 1989, she found herself in South Africa starring in this obscure B flick, which briefly made the video and cable rounds in the early 90s before sinking into complete obscurity. 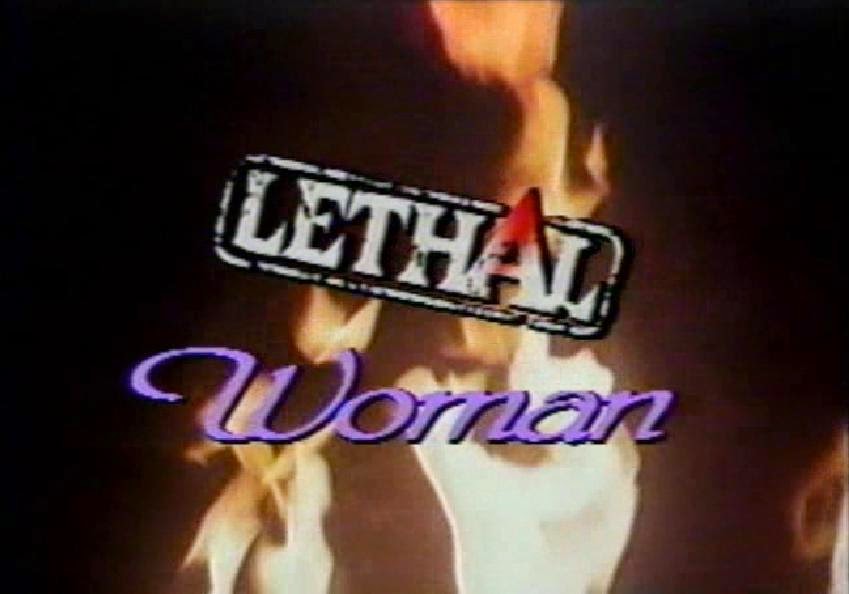 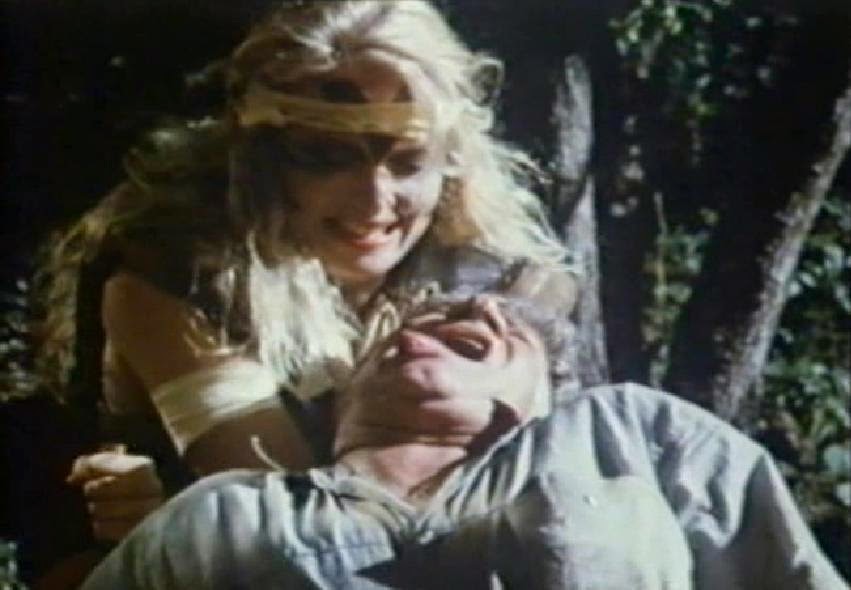 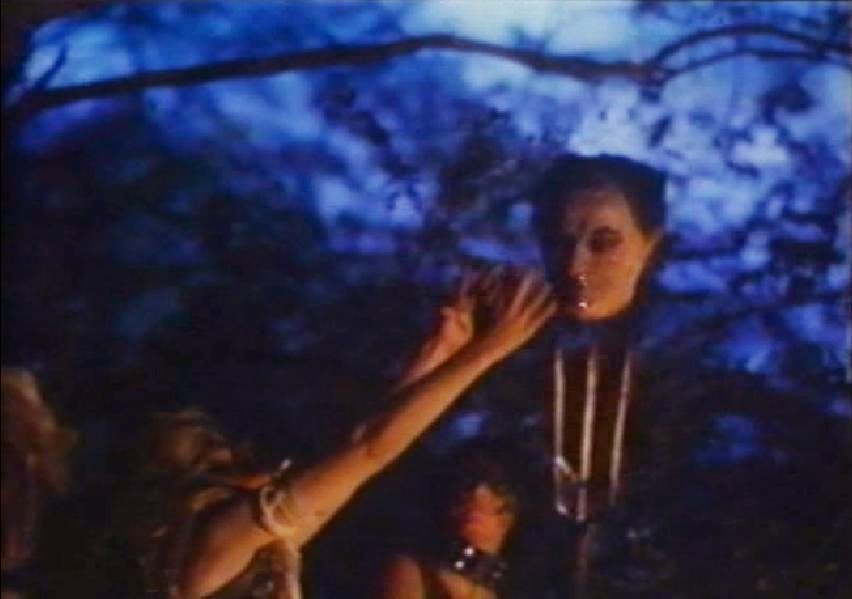 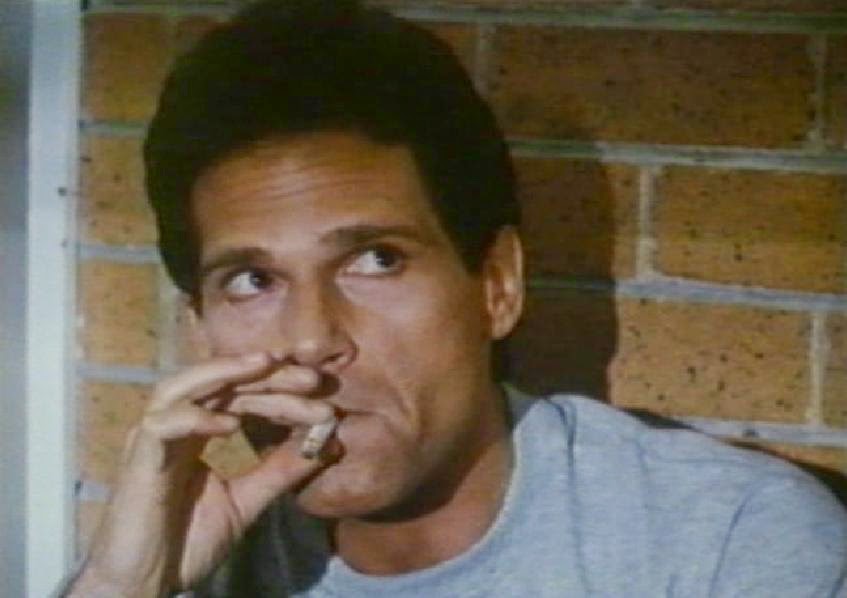 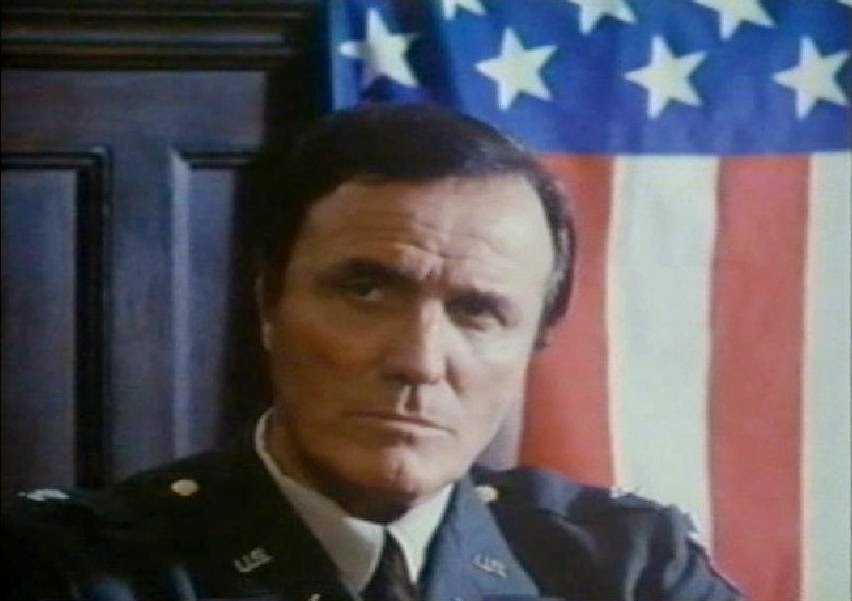 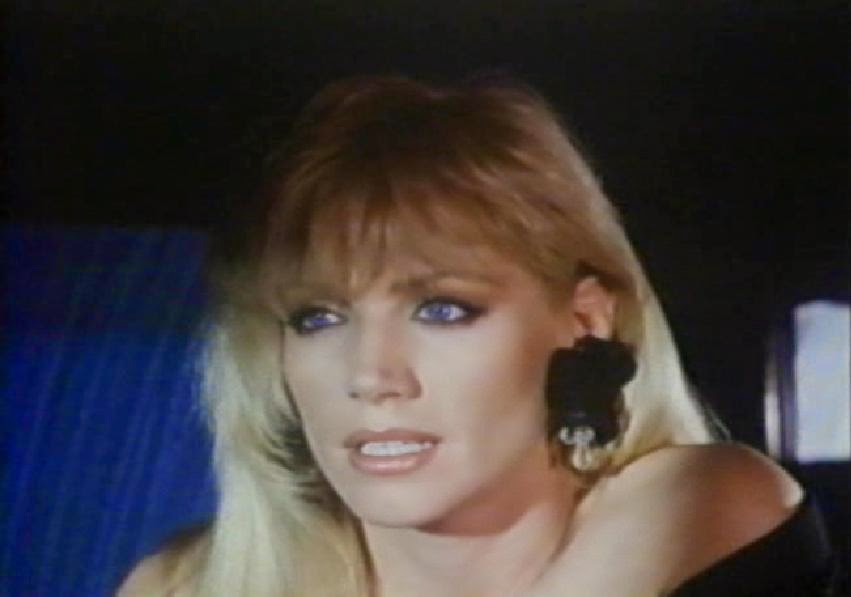 Things begin with an old man in a terrible wig being garroted and a bunch of topless women in animal skins moaning and dancing around a campfire with the victim's head speared on a trident. It's a sign of things to come for some male scum who have it coming. We then meet Army Major Reserve Derek Johnson (Robert Lipton), whose qualifications are adequately laid out when his black karate instructor friend calls him "the slimiest, sneakiest white boy I've ever run across." Being a middle-aged wounded war hero with a bum leg who has retired from active duty to write spy novels doesn't stop Derek from whipping the asses of a quartet of young army recruits during a training exercise. It also doesn't keep him from being forced out of retirement by his superior, General Grant (Larry Taylor). As it turns out, in the past seven years, twenty U.S. Army personnel have mysteriously disappeared without a trace and the General wants Derek to get to the bottom of things. He shows our hero a photo of an attractive blonde woman who may be responsible. 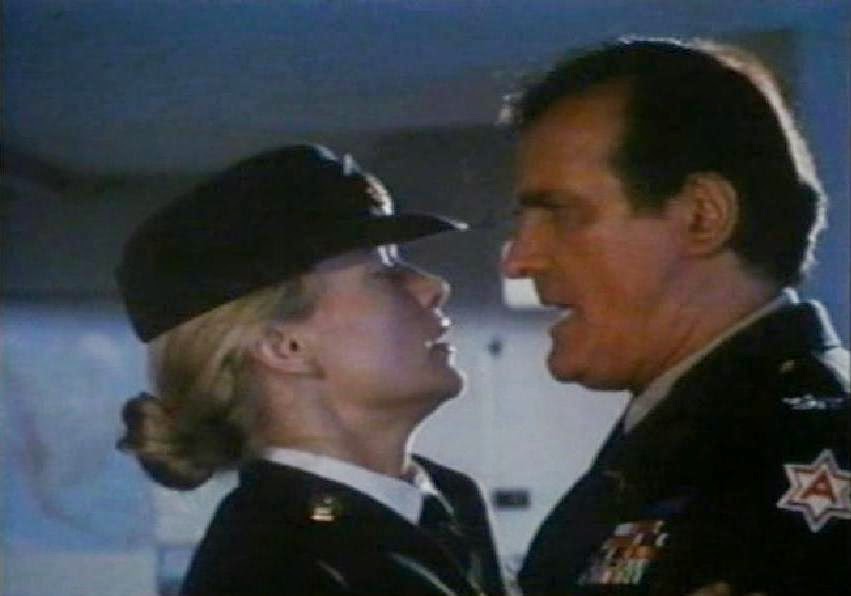 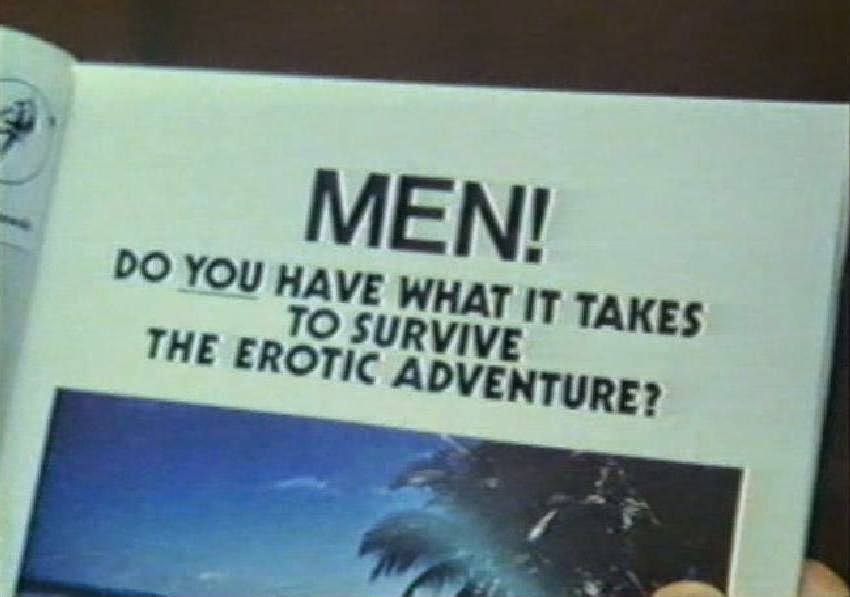 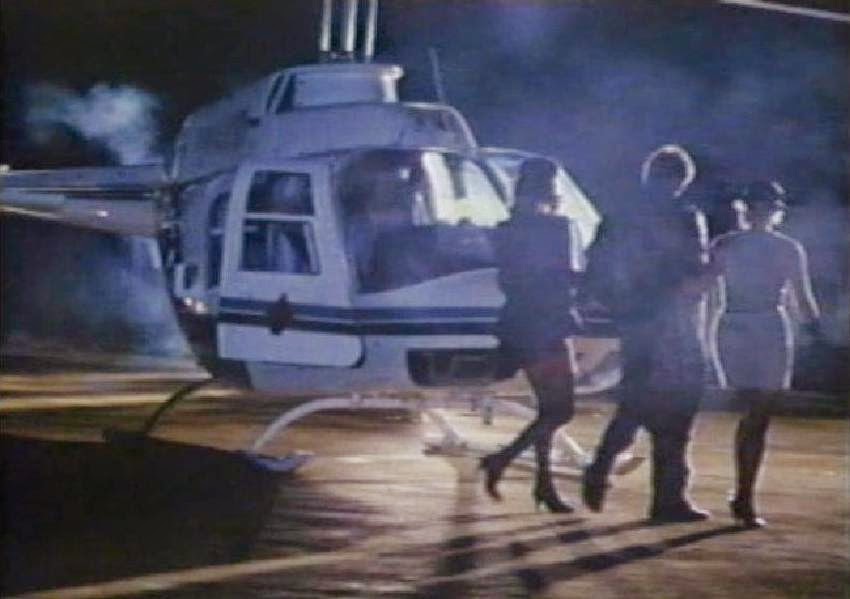 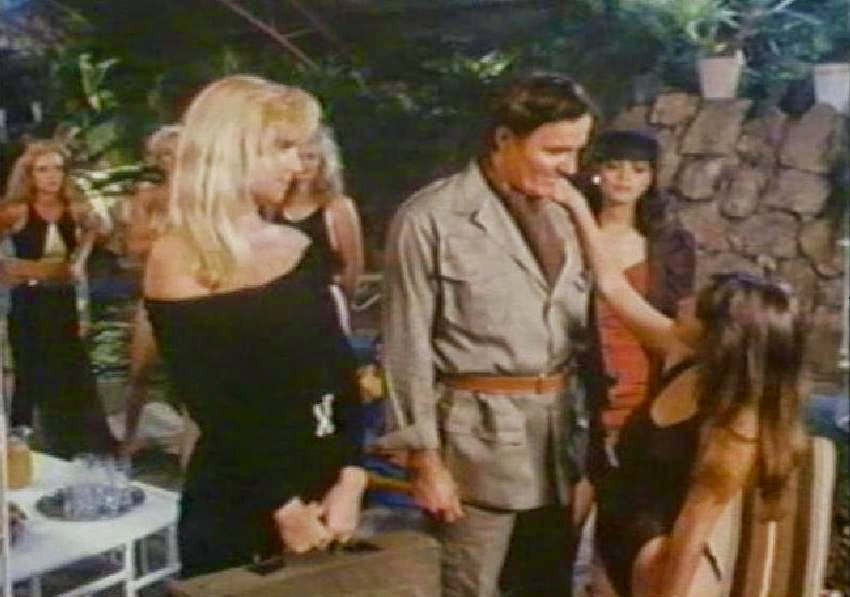 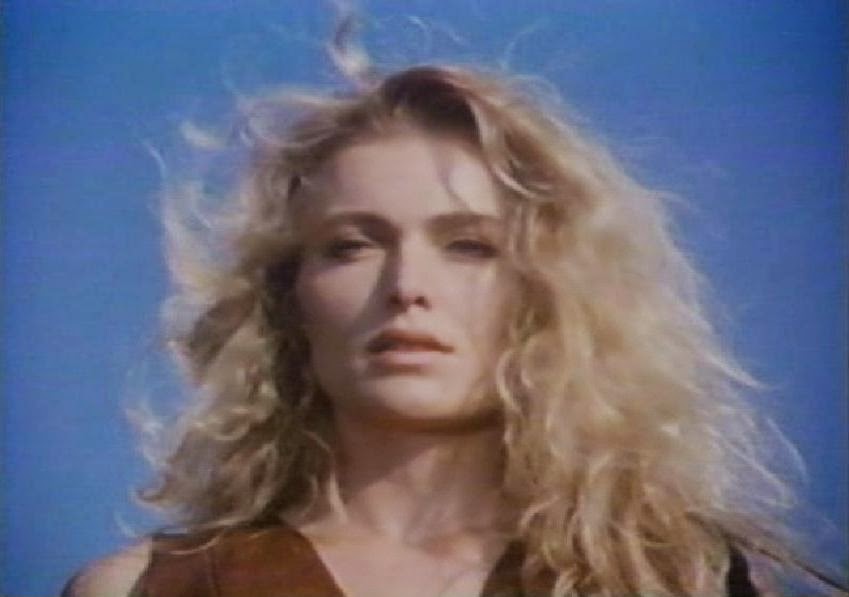 The blonde in question is former army cadet Christine Newhouse (Van Kamp), who hasn't been seen or heard from since 1982 when a rape case she took in front of the military tribunal was thrown out and she was dishonorably discharged. So what has she been doing in the meantime? Well, she's changed her name to Diana and has purchased her own island. And she's drafted a mini-army of other vengeful female rape / assault victims who live on the island with her. And she's been running an ad in a popular adult magazine promising an "erotic vacation" to the island for any man who can handle it. Said "erotic vacation" has been set up specifically to ensnare male rapists; who are lured there for sex and end up being hunted down by a crossbow-carrying "Diana" and her spear-chucking gal pals instead. Once killed, the men are decapitated and their heads are hung in the cellar trophy room. In between the hunts, the women (who are naturally all attractive) like to cavort around in lingerie or topless in their  luxurious swimming pool. Derek eventually arranges for a trip there, ends up falling in love with one of the women and has to resort to violence when the others attempt to hunt him own during the last 15-20 minutes. 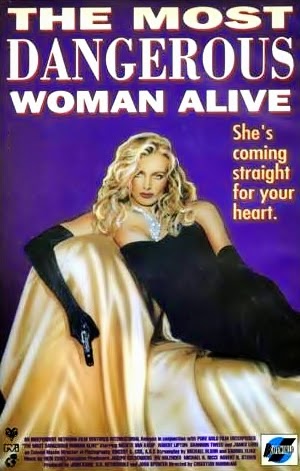 For this film to work as anything other than trash, it would require a smidgen of believability, as well as creating a compelling central character in Christine / Diana. The film accomplishes neither. Via long flashbacks, we learn that Christine was indeed raped by sexist pig Colonel Jerry Maxim (James Luisi) in his office. As it turns out, her dignity wasn't the only thing he stole on that fateful day. Christine was a virgin ("... just the way father wanted it.") and had been saving her virtue for her fiancé, John (Deon Stewardson). Everyone (including John) then lied about the incident to cover for Maxim. The incident destroyed Christine's credibility, career, life and relationships with both her lover and her best friend Vikki (Kryska Wilkowska), who she discovered had been sleeping with her man behind her back. As if that wasn't bad enough, Christine ended up getting raped a second time in her car at gunpoint, again by Maxim, who probably figured since he got away with it the first time, he might as well go in for a second helping. Needless to say, such horrible treatment should get us behind Christine 100 percent... and yet, it doesn't. I don't know what part Van Kamp's acting had to do with that, but the script arming her with an array of corny pseudo-feminist one-liners ("I won't be anything less than what I am!") probably didn't help her plight any. 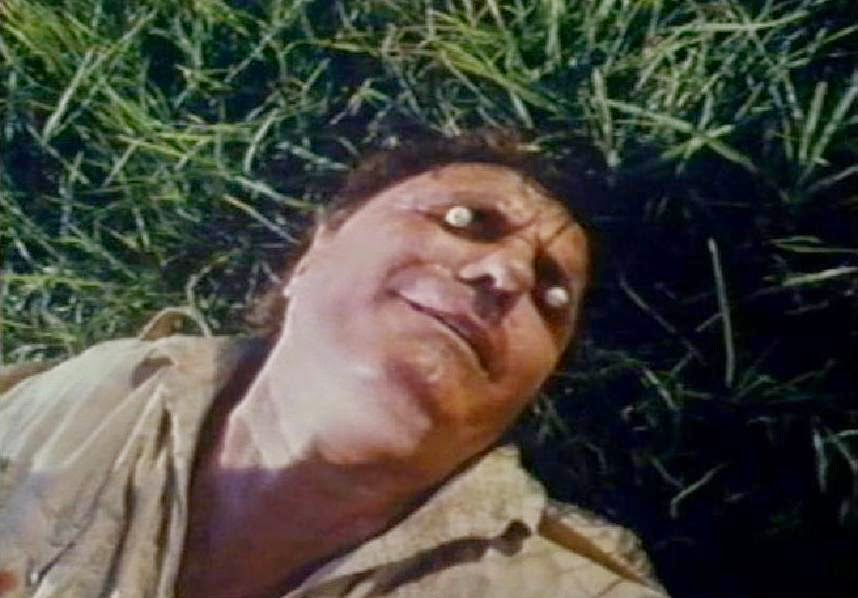 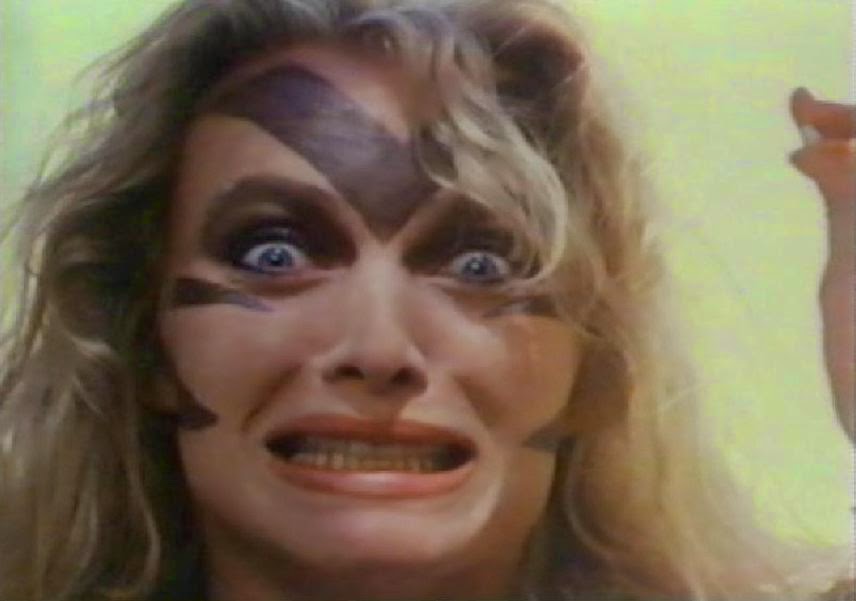 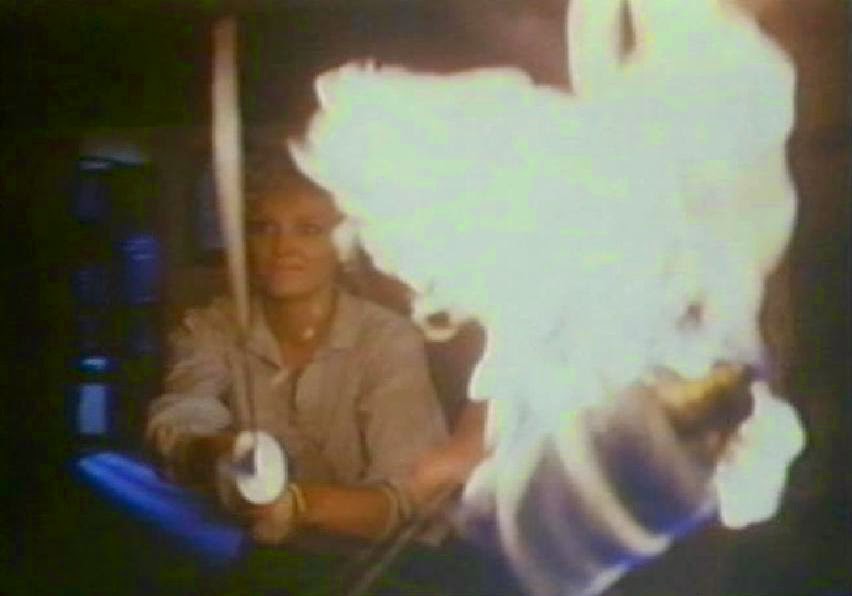 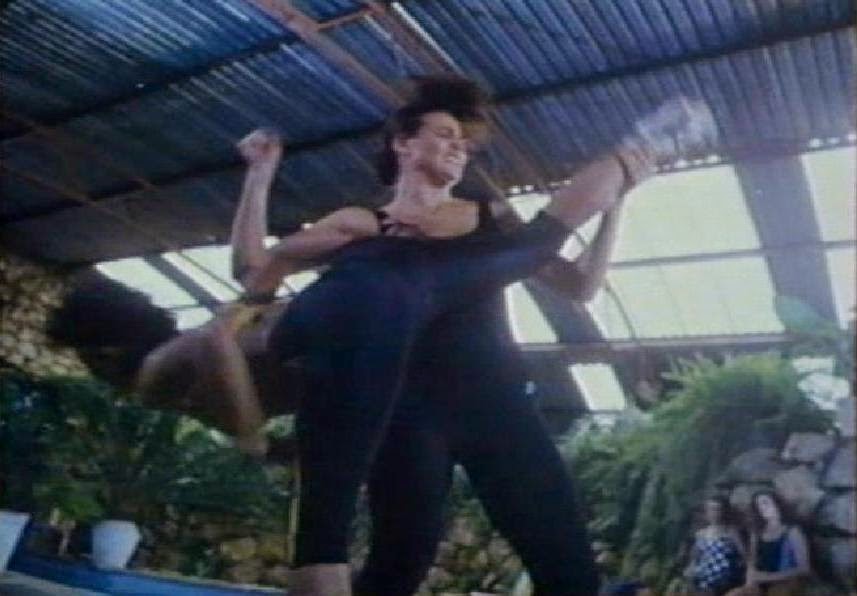 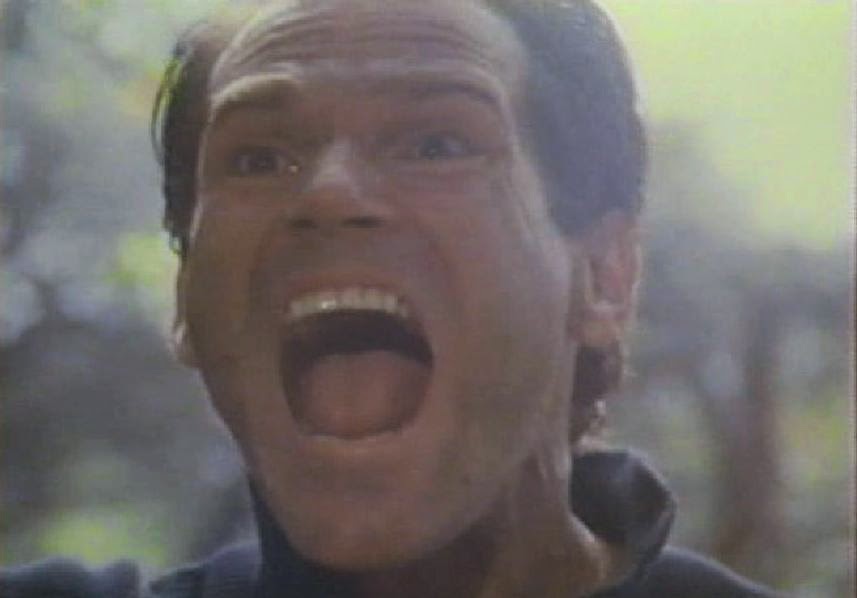 Fairing best of all in the cast is Shannon Tweed, who has a large co-starring role as Tory McAllister, a helicopter pilot in charge of escorting prey to the island. Tweed was well-known in the 80s as the most popular Playboy Playmate of the decade and ex-girlfriend of Hugh Hefner. In the 90s, she dominated the cable and video soft-core market with dozens of releases, and then became a reality TV star in the 2000s alongside eventual husband Gene Simmons on their popular Family Jewels series. One thing Tweed perhaps has seldom been given credit for is being a competent actress; something on full display here as she easily eclipses the leading lady in terms of acting talent and natural on-screen charisma. She also has some nice chemistry with Lipton during their scenes together. The cast also includes Adrienne Pierce (Demon Keeper) and Kenyan-born dwarf actor Deep Roy (a regular presence in Star Trek, Star Wars and Tim Burton movies). IMDb also credits Carrie Bittner (aka porn actress Alicyn Sterling) with the part of "Miss Dillon" but she is nowhere to be seen, nor is there a character by that name in the film. 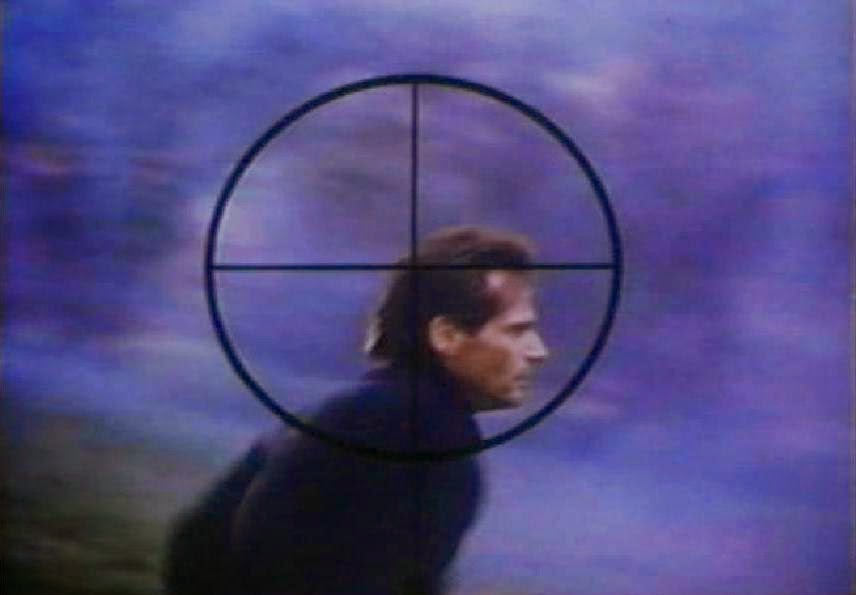 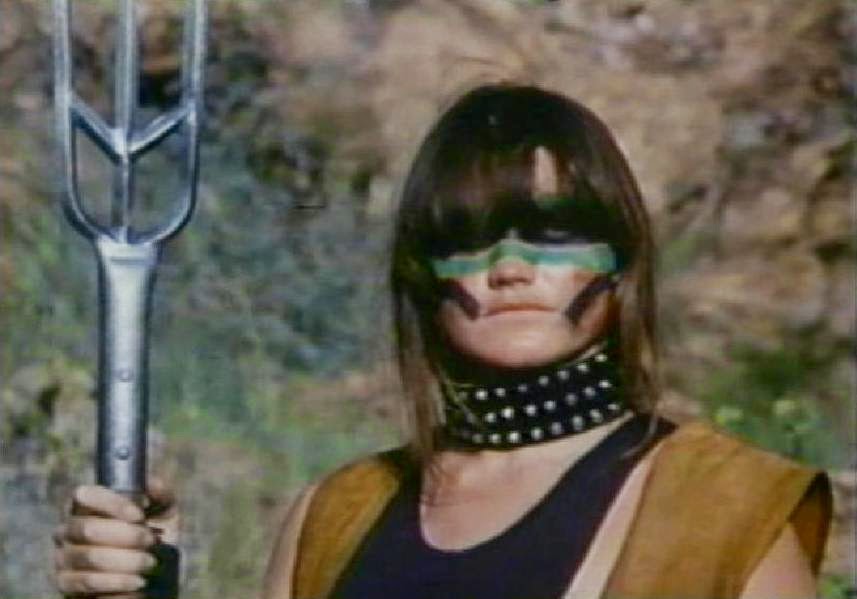 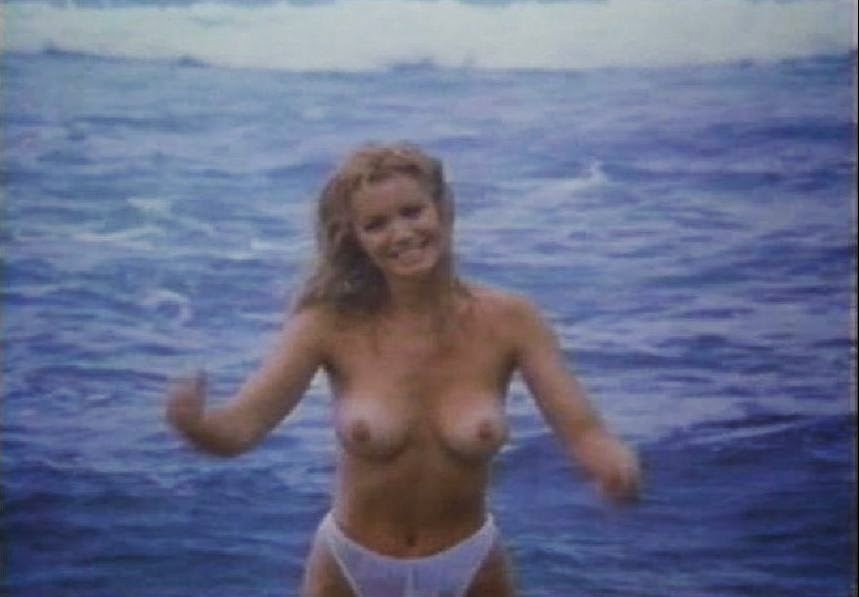 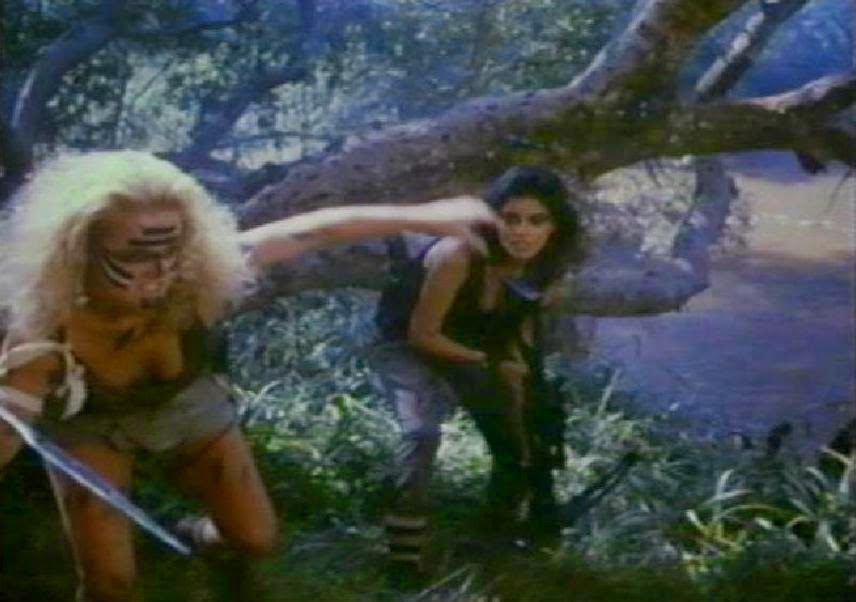 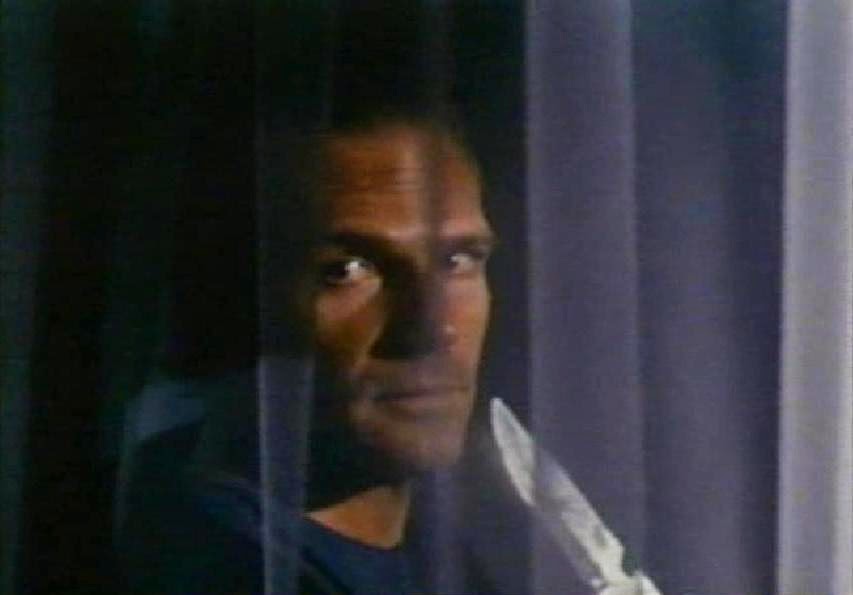 Aside from copious amounts of nudity, the film also offers up enough cheesy fight scenes and violence to entertain. Men beat up men. Women beat up women. Men beat up women. Women beat up men. Heads are chopped off, arrows are shot into legs, necks are snapped, knives are stuck into crotches, eyeballs are gouged out with earrings and, during a lavish feast, some of the ladies even eat the flesh of one of their victims. A woman is set on fire and another is impaled while topless. One of Diana's butch henchwomen has an acid-scarred face and is missing her tongue from a previous assault. There's also a title theme song, "Most Dangerous Woman Alive;" which was also the release title in the UK. The U.S. VHS was from VidAmerica. There's no official DVD for this one as of yet.