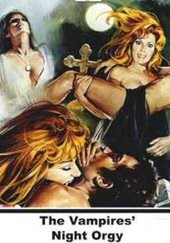 ...aka: Grave Desires
...aka: Orgy of the Vampires, The
...aka: Vampire's Night Orgy, The
Directed by:
León Klimovsky
A handful of people going across rural Spain on a bus to take various jobs at a large estate, end up becoming stranded after their driver suddenly dies from a heart attack. Ernesto (Gaspar 'Indio' González) decides to take the wheel and leads them all into a small, seemingly deserted village. When they enter the local inn/tavern they notice accommodations have already been made to handle guests, so even though no one seems to be working there, they decide to kick back and spend the night, with plans to head out toward their original destination the next morning. Also showing up to join the tourists is Luis (Jack Taylor), another guy just passing through town, who takes an immediate liking to Alma (Dyanik Zurakowska), the obligatory hot blonde of the group. Later that night, while investigating some strange noises outside, Ernesto is attacked by a bunch of leering, biting, pale-faced people and never shows up the next day to join his fellow travelers. But the townspeople do suddenly seem to materialize after their absence the night before. Friendly town major Boris (José Guardiola) encourages them all to hang around in the town for awhile as guests, but they decline his invitation. When they try to leave, they discover that someone has tampered with both the bus and Luis' car, so now everyone's stranded. And then everyone starts disappearing one by one. Some of them do show up again, but they're not quite the same...
As you have probably already guessed from the title, the entire village is inhabited by vampires, and the "guests" are their dinner... or in the wealthy, seductive Countess' (Helga Liné) case, dessert. After generously paying off the frustrated tourists so they'll stick around, she insists the best-looking guy, Cesar (David Aller), sticks around to recite Shakespeare and Browning to her. Instead, she seduces him, bears her huge fangs, sucks some blood and then flings his body over her balcony to a bunch of blood-starved zombie-like villagers waiting below. This movie actually has many other great scenes like the one listed above, and many off-the-wall touches you may not expect. Since the villagers have no real need for traditional food to feed their guests with, a hulking woodsman (played by the massive Fernando Bilbao) shows up brandishing an axe. He selects a random villager and chops off an arm or a leg, which is then cooked and served up as dinner to the unknowing guests! There's also a memorable attack sequence where two guys (Manuel de Blas and Luis Ciges) are lured onto a bus and then attacked by vampires who pop up from behind the seats. Single mother Raquel (Charo Soriano) has a hard time keeping track of her little girl Violet, who's been wandering off to the local cemetery with a weird little vampire boy, but does manage to find some catacombs underneath the inn that lead to a secret tomb.
The old crumbling town itself looks great and is the perfect setting for the story. The music score is extremely bizarre, but I thought it was pretty great myself. The cast is very good. The movie is also well paced and doesn't drag a whole lot. The only actual gripe I have is the lighting. It's a clean-looking picture with little damage to the actual print, but it's frequently too dark, especially during the night scenes. I don't know if that's the fault of the DVD company or the filmmakers, but the movie could have used a bit more light in places. There are also some slight variations in the prints that should be mentioned. The version I saw that was released by Eclectic has almost all of the nudity removed aside from one brief topless scene from Zurakowska. Apparently in the original cut, Zurakowska had several nude scenes ("hero" Taylor is something of a peeping tom and watches her undress through a peephole), and Liné had one, but these have all been removed from the print I saw. Not sure if the other DVD releases retain the same cuts or not, but the version I saw had very little actual sex or gore.
I'm glad elsewhere it's been pointed out the striking similarities between this and H.G. Lewis' classic gore-fest TWO-THOUSAND MANIACS (1964), because that's precisely what came to mind while I was watching this. Both involve travelers becoming stranded in small towns and being preyed upon by the weird-acting inhabitants. Both feature leering townspeople who stand around in the background silently and eerily gawking. Both feature the friendly mayor who insists they be "guests," as well as the seductress character who makes easy prey of one of the guys. In both films, the victims' vehicles are tampered with. Both films also boast the same exact twist ending if you can imagine that. I'd say it's same to assume that the writers of this one saw Lewis' film and decided to do a vampire variation on it. In any case, in my opinion they did a pretty good job with it.
★★1/2
Posted by The Bloody Pit of Horror at 8:30 AM