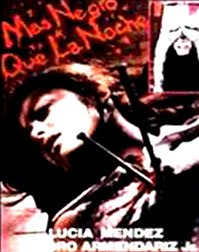 ...aka: Blacker Than the Night

Aspiring actress Ofelia (Claudia Islas) is living in a crowded apartment with three other young women; librarian Aurora (Susana Dosamantes), model Marta (Lucía Méndez) and Pilar (Helena Rojo), who's living off alimony checks from her ex-husband Roberto (Pedro Armendáriz Jr.), when she's learns she's just inherited some property after the passing of her stern great aunt Susana (Tamara Garina). The inheritance includes a large country home, which Ofelia and her friends promptly move into. The only stipulation is that she must must care for Susana's beloved pet cat Bequer, who the sinister live-in housekeeper Sofia (Alicia Palacios) refers to as "blacker than the night." Three of the ladies aren't exactly cat people and when Aurora's pet canary is killed, the cat itself mysteriously disappears, only to be found dead in the home's cellar days later. Soon after, each of the ladies begin hearing eerie crying sounds and a female voice calling for the cat, are paid visits by the dead aunt's black-clad, cane-carrying ghost and begin dying in mysterious ways.

Overall, it's a mild, predictable ghost tale; talky, slow-moving and with just a handful of potent horror/ suspense scenes. It's well-made, though, and the cast is appealing. But what makes this one a little more interesting than others of its type is that it seems to look at "modern" young ladies of the time with genuine disdain. All three of Ofelia's friends are - for the most part - rude, uncompassionate, gossipy, flighty, indecisive, oblivious and self-centered. They seem to have no reverence for things of the past, no respect for the simplest of rules and no appreciation for the antiquities contained in their new home (which they refer to as "junk"). They mock the elderly housekeeper and scoff at her warnings; only warming to her when they feel like their asses are on the line. It's an obvious comment on the attitude of the then-new generation of provocatively-attired young women from an aged, conservative, male stance. I could see some being faintly offended by that (granted anyone notices or even cares), but hell, in a world where the cast of The Hills and Paris Hilton are deemed worthy of fame and attention, I have no problem with someone turning their nose up at the increase in what he / she feels is the willfully ignorant, especially in something that's over 30 years old.

Taboada, the most respected of all of Mexico's horror filmmakers, began his career scripting such south-of-the-border genre fare such as the Nostradamus series (1960) and THE WITCH'S MIRROR (1962) before moving on to direct such acclaimed films as HASTA EL VIENTO TIENE MIEDO (1968; "Tonight, Even the Wind is Afraid") and THE BOOK OF STONE (1969).