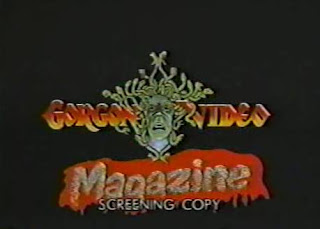 Both this and the original GORGON VIDEO MAGAZINE provide a great look at what was going on in late 80s horror. I learned a lot of things I didn't know from watching both. Unfortunately, this second and final video magazine (a special Halloween edition again hosted by Michael Berryman and running 90 minutes) was never officially released to video stores. A series of screener copies however were sent out to a few places, which is how I was able to obtain a copy (which had "Screening Copy" on the bottom the entire time). 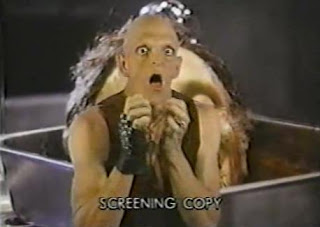 Director Stuart Gordon says he wants to make movies that "amaze, astound and make you lose your cookies." He discusses the fall of Empire Pictures ("I felt lost..."), his background in live theater and with the successful Organic Theater Company, problems with the rating's board and how horror films help one deal with their own mortality. We get to see clips from RE-ANIMATOR (1985), DOLLS (1986), FROM BEYOND (1986) and ROBOT JOX (1989); the latter being the highest budgeted Empire Picture at 7 million dollars. We also get some rare 8mm film clips from Gordon's early b/w short Mental Illness for Fun + Profit. At the end of the interview, Gordon says that he's getting ready to shoot THE PIT AND THE PENDULUM and the slated stars are Peter O'Toole, Billy Dee Williams and Sherilyn Fenn (none of whom were actually in the cast once it was made). 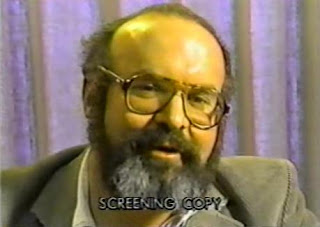 Linnea Quigley demonstrates her scream and introduces our next segment on Penn and Teller. Naturally, Penn Gillette does all the talking... about how he and Teller were bored with modern magic ("it sucked!") and wanted to do something bold and different. We get to see clips from their starring vehicle PENN AND TELLER GET KILLED, as well as the secrets behind their Rat Cage trick. Penn cites Romero's zombie trilogy as the three most important horror/gore movies, calls When Harry Met Sally "a piece of absolute shit" and says of the MPAA that "They're trying to give more power to the half-assed gore movies - the Jason and the Michael Myers and the guys who have the studios behind them." 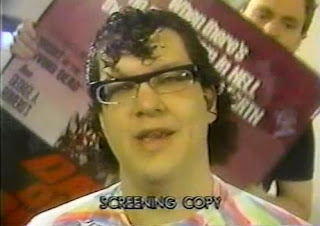 Next up with a scene from HALLOWEEN (1978) and director Dominique Othenin-Girard talks about the upcoming HALLOWEEN 5, which is ironic since several people in this documentary actually knock the series, as well as the Friday the 13th and Elm Street franchises. A segment on talented special effects artist Screaming Mad George (who took his name from Screaming Jay Hawkins) is up next. We get to see some of his work for POLTERGEIST II (1986), CURSE II: THE BITE (1989), SOCIETY (1989) and others, as well as his paintings, animation sequences he designed and some footage of one of his three (!) bands performing. He says his inspiration was looking at art books in 8th grade, particularly the work of Salvador Dali. Rob Bottin and Dick Smith, and their work on ALTERED STATES (1980) and THE THING (1982), got him interested in special effects. 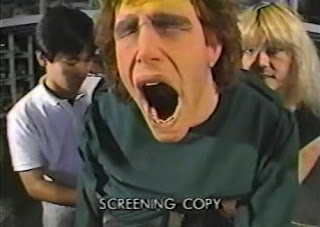 "The Galloping Gore-Met" (Charles Schneider) teaches us how to make karo syrup fake blood in the next segment. He'll show up another time at a later junction to show us how to make more realistic blood with chocolate syrup, food coloring, karo and water. A segment on Paragon Arts International follows and features interviews with co-founder Walter Josten, producers Joe Augustyn and Jeff Geoffray, director/writer Kevin S. Tenney and director Dominique Othenin-Girard again, plus clips from WITCHBOARD (1986), NIGHT OF THE DEMONS (1988) and their upcoming release NIGHT ANGEL (1989). They also announce they'll be making WITCHBOARD 2 soon (which they did in 1992). Next up is a segment on sex-and-violence-filled underground Zap Comix, featuring interviews with Robert Crumb (subject of the award-winning 1994 documentary CRUMB), Victor Moscoso and S. Clay Wilson. Wilson claims the 80s are "more repressive" than the 60s and 70s, and says he doesn't think there are that many good films but says he likes THE TEXAS CHAINSAW MASSACRE (1974), THE TENANT (1976) and ERASERHEAD (1977). 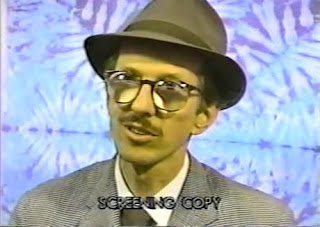 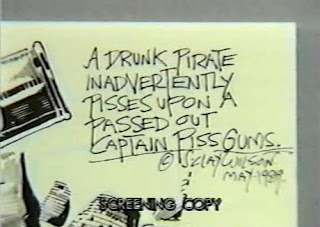 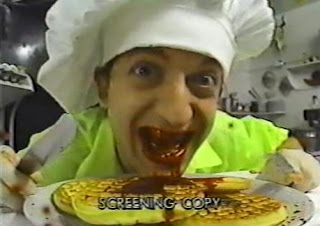 Alex Winter shows up to plug IMPACT VIDEO MAGAZINE and then we get to see some more adult-oriented trading cards on the market such as "Freakards," "Dinosaurs Attack!" and even "Death Cult: Jonestown Massacre Memorial Cards" (!!) Wes Craven pops up briefly to move us along to the next segment. 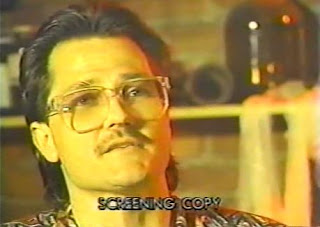 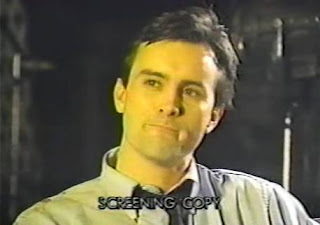 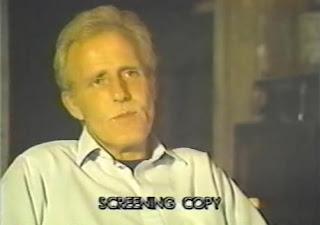 Next we get to go on the set of BRIDE OF RE-ANIMATOR (1989). Director Brian Yuzna, special effects artist Tom Rainone, actors Jeffrey Combs and David Gale (who passed away in 1991) and others are interviewed. Some weird performance art piece (featuring some kind of wailing monster with a blood spurting eyeball) titled "Fashion Show" follows. A plug for Sinister cinema releases set at a drive-in is up next and we get scenes from HORROR HOTEL (1960) and THE DEVIL'S PARTNER (1961). Finally, "Home Horrors from Hell" features a scene from something called Splatter Girls, a "cannibal musical" shot with a camcorder.

Posted by The Bloody Pit of Horror at 8:23 PM 4 comments: 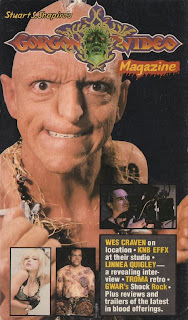 Remember Gorgon Video? During the VHS era of the 80s and early 90s, they were primarily known as the studio who released the notorious FACE OF DEATH series to home video. But that's not all they did. They also released other genre films from around the world (including such titles as BAY OF BLOOD and SLAUGHTER HOTEL) and even made this home video magazine featuring what was hot back in 1989. Michael Berryman (dressed in his HILLS HAVE EYES garb) makes a bunch of hilariously bizarre facial expressions as our very enthusiastic, expressive host and introduces each segment in front of movie clips. We also get occasional animated segments from John O. Francis Jr. and Joe Horne thrown in. The first segment is about "the crown prince of horror" Wes Craven. The interview is conducted around the set of SHOCKER (1989). Craven talks about creative freedom, what's great about working on horror films, dealing with censorship and what turned this former "church-goer" and "working class kid from Cleveland, Ohio" into a horror filmmaker. Clips from 90-thousand-budgeted hit LAST HOUSE ON THE LEFT (1972) and THE HILLS HAVE EYES (1977), which apparently failed theatrically because many theaters refused to show it, are shown. Craven also states that his TV movie debut CHILLER (1985) failed when it was knocked down to a 11 pm time slot because of a championship basketball game and says that the only film that he submitted to the MPA that was passed uncut was THE SERPENT AND THE RAINBOW (1988). 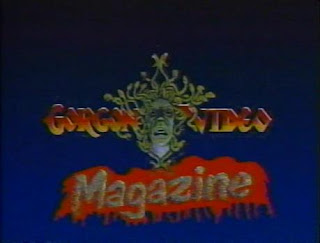 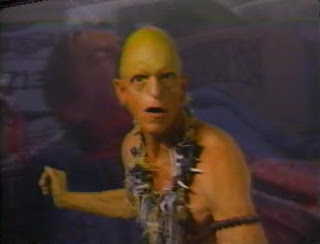 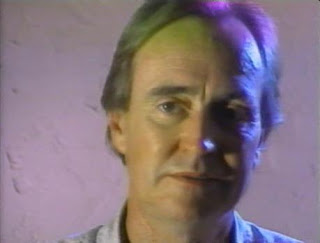 The talented guys from KNB (Robert Kurtzman, Greg Nicotero and Howard Berger) are next. They discuss getting their starts in special effects, what's appealing about horror and how most of their fx work was cut from the R-rated version of INTRUDER (1988). We also get a look behind-the-scenes at KNB Fx Facility and see some of the effects they designed for such films as CREEPSHOW 2 (1987) and THE HORROR SHOW (1989). 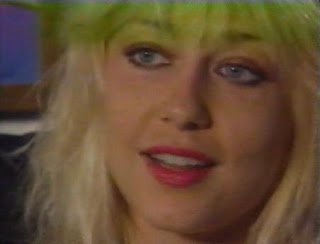 .............Linnea Quigley took her parents to the premiere of Hollywood Chainsaw Hookers.

"Queen of the B's" Linnea Quigley is up next to talk about her career (and what her parents think of her career). Here we get some nice clips from HOLLYWOOD CHAINSAW HOOKERS (1987), SORORITY BABES IN THE SLIMEBALL BOWL-O-RAMA (1987), NIGHT OF THE DEMONS (1988) and LINNEA QUIGLEY'S HORROR WORKOUT (1989). Following her is a segment on Troma's Lloyd Kaufman. He discusses the start of the studio (their first release was SUGAR COOKIES) and problems with censorship (a recurring theme here). According to him, horror filmmakers are unfairly singled out by the rating's board and Troma is treated worse than most studios. We also get clips from Troma releases THE TOXIC AVENGER (1984), THE TOXIC AVENGER, PART II (1988) and EVIL CLUTCH (1988). 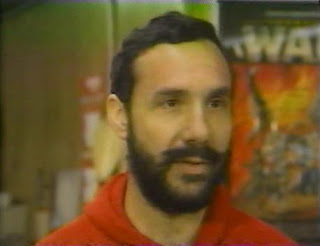 Gore Gazette's Rick Sullivan then gets his own review segment. The verdict? BAD TASTE (1987), VICIOUS (1988) and HENRY: PORTRAIT OF A SERIAL KILLER (1986) all get 4 skulls on the "gore barometer" and poor CAMERON'S CLOSET (1987) gets... just 1. Getting burnt out on all the clips yet? Well they even throw in a weird/bloody performance art segment featuring a female singer (Lia Niskanen) performing a song in French ("Sans Amour") and then ripping her head open.

Clips from A BUCKET OF BLOOD (1959) and ATTACK OF THE GIANT LEECHES (1959) are shown during a dedication to drive-in movies, which turns out to basically be a plug for the Sinister Cinema catalogue. In a segment co-directed by Alex Winter (of Bill and Ted's Excellent Adventure fame), shock rockers GWAR ("They make Alice Cooper look like Sesame Street!") are profiled. We also meet an embarrassing group of "GWAR Slaves;" a bunch of drugged out weirdos who do things like get dismembered and puke on stage and use irritating phrases like "gigantic genitaliatica" and "necrophlic butt sex." Next up are previews for DEATH SPA (1987), GIRLFRIEND FROM HELL (1989) and JUDGEMENT DAY (1989). Finally we get a flurry of VHS covers of the movies we've just seen, along with their distributors. 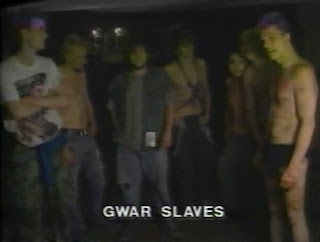 Unlike some other documentaries and video mags from back in the day, this is informative, well made, entertaining, very much still worth watching and a nice trip down memory lane to a much simpler time with a much smaller community of actors, directors, producers, writers and fx guys slogging away in an oft-maligned subgenre. It's also nice to note that Berryman, Craven, Kaufman, Quigley and KNB all still enjoy success in the genre over 20 years after this was made.

GORGON VIDEO MAGAZINE: VOLUME 2 was also made the same year and was never officially released to video stores, though a few screener copies were released. Gorgon also made IMPACT VIDEO MAGAZINE (1989), which covered art, music, news and political satire and was hosted by Winter. Included there were music acts Public Enemy, Jane's Addiction and Butthole Surfers, more animation from Joe Horne, underground painter and co-founder of Zap Comix Robert Williams, comedian Bill Hicks, Village Voice columnist Michael Musto, some performance art (including a recycling of the "Sans Amour" act seen here) and the short BAMBI MEETS GODZILLA. It was hosted by Alex Winter.

Posted by The Bloody Pit of Horror at 7:38 PM No comments: