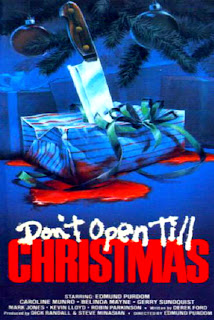 
Despite running on about three hours of shut-eye today, I had a great visit with my sister and niece, got some nice gifts, had a lovely family dinner and made my five hour round trip drive to and fro without a flat tire, an accident or a speeding ticket in very mild and cooperative weather. I must have been a good boy. Right? Well, now I'm not so sure, especially after popping in Don't Open Till Christmas. For a change, I actually decided to heed this film's warning, which is more than I can say for answering the phone, opening the door, going into houses and the woods (... alone even!), going to sleep, looking in the attic and basement, messing with sisters (OK, that one's a joke) and torturing ducklings (that one too). Like its lead detective character I opted not to open this until Christmas day because sometimes I do like to follow the rules. Little did I know, but Open would become the proverbial lump of coal in my stocking on an otherwise fine day. Yes, Mr. Claus can and does work in mysterious ways. Now I feel like I've gotten my just punishment for being a naughty boy who watches naughty movies all year long. 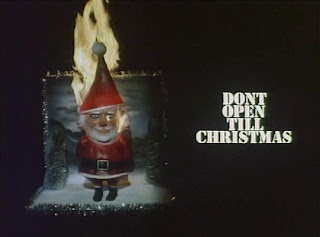 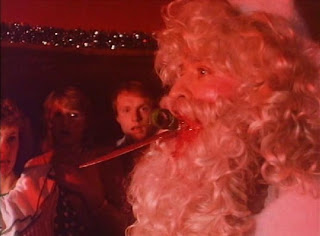 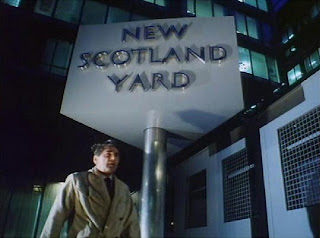 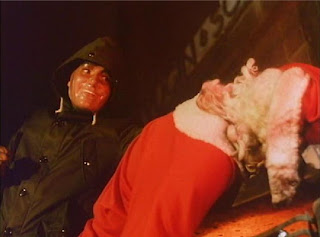 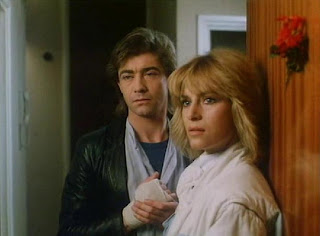 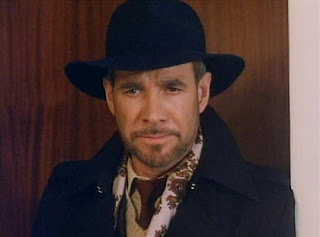 A man dressed as Santa and his girlfriend get stabbed to death while necking in a car. Soon after at a Christmas party, a man decked up as Saint Nick gets a spear chucked through his head. Has the real Santa finally gotten ticked off about all the posers out there spoiling his good name? Sadly, no. And that is a movie I wouldn't mind watching at all. Here all we get is yet another maladjusted psycho who had a fucked-up childhood (*yawn*) in yet another inept slasher flick (double *yawn*).

As the LOL-worthy headline "Santa Slain in Soho!" splashes across the evening paper, detectives at the New Scotland Yard know they've got their work cut out for them. With the commissioner breathing down their necks and newspaper columnist Giles (Alan Lake) worrying the citizens with his sensationalist articles, Chief Inspector Ian Harris (director Purdom) and his assistant Sgt. Powell (Mark Jones) get on with their investigation. They first question Kate (Belinda Mayne), daughter of the spear victim, and her live-in lover Cliff (Gerry Sundquist). Since Kate's father was very rich and Cliff is a "cheeky little bugger" and a drop-out, Harris' first instinct is that one or possibly both of them offed pops for his money. That doesn't quite explain why the couple would be killing numerous other Santa's in the area, but hey, at least it's a theory. Having the rich, now deceased father also doesn't explain why Kate and Cliff are forced to panhandle (!?) on street corners for money. Nor does it explain why Cliff tries to coerce Kate into posing topless for his sleazy photographer friend Gerry (Kevin Lloyd) - who keeps his studio cold so that his model's "nip-nips stand out" - for 50 bucks either. 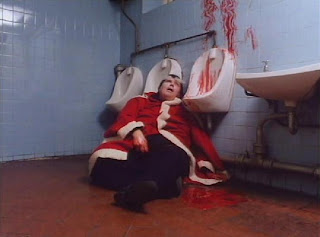 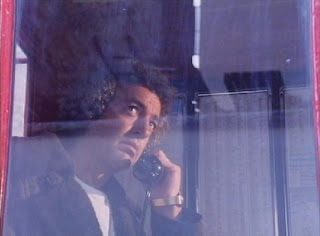 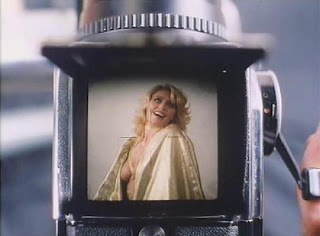 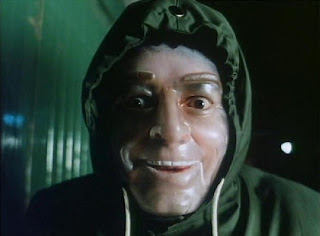 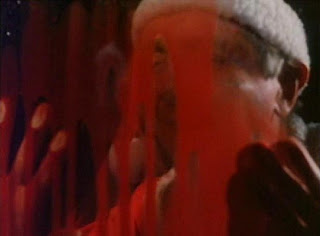 Meanwhile, many (and I mean many) other Santa's bite the big one. A "chestnut vendor" has his head fried on an outdoor grill and bursts into flames. A portly Santa gets his dick cut off (!) while taking a piss in a public restroom. While visiting a peep shop, another Santa gets stabbed through the neck in front of a worker there and in a long and seemingly tacked-on sequence, a Santa steals a bike, is chased by some punks, jumps a fence, has a run-in with a guard dog and ends up in some kind of bizarre indoor spook show where he's stabbed to death. Not enough? Two Santa's are killed at a circus. One has a broken bottle jammed into his eyeball. The other is kicked in the crotch with a boot with a retractable blade hidden inside (!) and is hit in the face with a spiked glove. One Santa sneaks into Piccadilly Theater, gets an axe planted in his face and his body pops up on stage to spoil sequined-and-teased Caroline Munro's performance of "I'm the Warrior of Love." Even Gerry's favorite nudie model Sharon (Pat Astley) has a run-in with the psycho, but he decides to let her go and she gets arrested by the police for indecent exposure instead! All of this begs the question: If there's a psycho going around murdering Santa's right and left, who in their right mind is going to be out in public by themselves - and at night - dressed in a Santa costume like the dozen dummies featured in this movie? 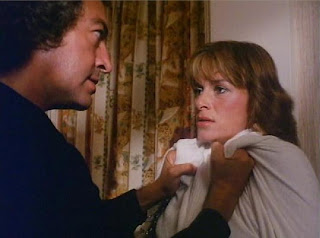 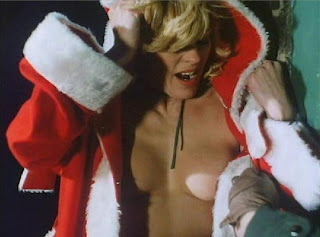 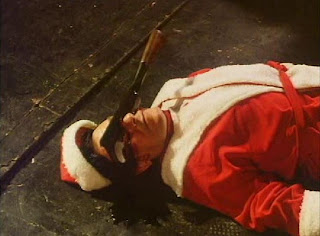 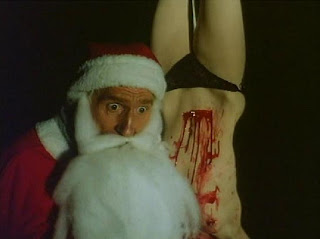 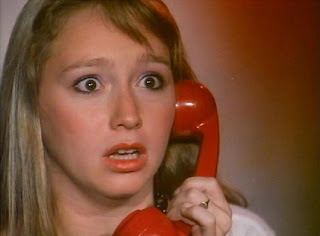 In between the numerous murder sequences, the film ineptly fumbles around with false leads, multiple suspects and other such nonsense to try to throw viewers off. The killer kidnaps Sherry (Kelly Baker), the peep show worker who witnessed one of the murders, then takes her back to his apartment, chains her up on a bed and plans on making her "the supreme sacrifice to all the evil Christmas is" on Christmas day. The killer also has a flashback that explains things. As a little boy, he walked in on his mommy boinking Santa Claus and then his nanny accidentally got knocked down the stairs and died. On yes, and I almost forgot that Inspector Harris has received a mystery present with a "Don't Open Till Christmas" tag on it and a nice holiday surprise inside.

The seldom-seen, 52-minute behind-the-scenes documentary THE MAKING OF A HORROR FILM (1984), an extra on the Mondo Macabro DVD release, recounts the numerous problems that plagued this production. Purdom quit before completion, was briefly replaced by scripter Derek Ford (who was fired after only two days) and then Ray Selfe stepped in to finish it off. There's also a credit for "additional scenes" being written and directed by "Al McGoohan;" a pseudonym for Alan Birkinshaw, so perhaps he was the fourth (!) director. Many scenes from the original shoot got scrapped, roles had to be recast or just dropped altogether, stuff was re-shot and additional scenes were filmed and eventually wedged in to give us the film we have today. It took two full years to complete! 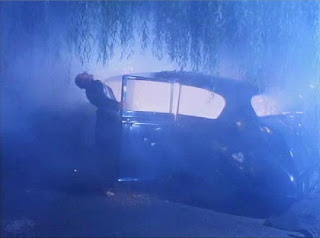 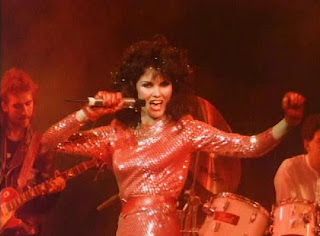 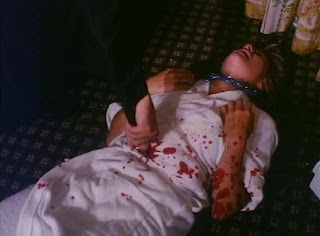 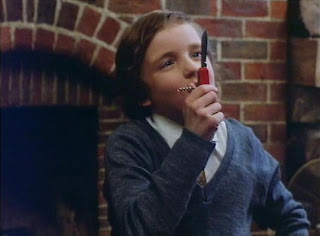 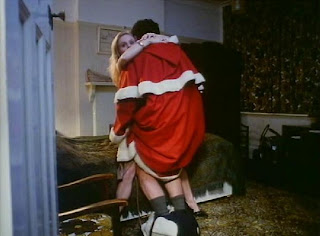 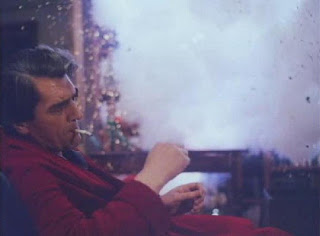