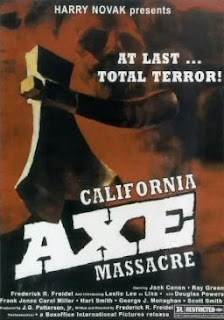 ...aka: Axe Murders, The
...aka: California Axe Massacre
...aka: California Axe Murders
...aka: Lisa, Lisa
...aka: Virgin Slaughter, The
Directed by:
Frederick R. Friedel
Three thugs; sadistic leader Steele (Jack Canon), cigar-chomping and equally violent Lomax (Ray Green) and young, apprehensive Billy (the director), go on a crime/killing spree. First, they put out a lit cigar on a man's face and threatens his lover, who promptly jumps out of a window nine stories up. Then they visit a convenience store, pelt a female clerk with apples, force her to take off her shirt, threaten to shoot an apple off her head and then pour beer on her. Meanwhile, at a secluded farmhouse, young, pretty, virginal Lisa (Leslie Lee) beheads a chicken and patiently takes care of her grandfather (Douglas Powers), a paraletic war vet vegetable and the only other person living in the home. One quiet evening, the three criminals barge in, make themselves at home, threaten the grandfather with a gun to get Lisa to send some cops away and then make her cook them dinner.
But the brutes picked the wrong home to visit and wrong girl to push around as Lisa's not as shy and demure as she appears. She's also not quite right in the head (and suicidal). All it takes is a sexual assault to send her over the edge, leading to a bloody retaliation. There's a razor to the back of the neck, a body dismembered in a bathtub and placed in a trunk, an axing and a sudden household menu change from the usual chicken, raw eggs and dairy products. There's plenty of that scuzzy, amateurish regional flavor some people seem to love, but it's not especially well made, the acting is very unconvincing and the whole thing is more dreary and unpleasant than scary. Cinematographer Austin McKinney does a decent job, though. Some passages of the score are haunting, while others are grating (two different composers are credited, so there ya go).
It was filmed as LISA, LISA in the fall of 1973 on an 11-day schedule. Though often listed as being released in 1977 (which is likely when it was distributed by Harry Novak's Box Office International), it actually played drive-ins as early as 1974. Various distribution titles include CALIFORNIA AXE MASSACRE (nonsense since it was filmed in North Carolina) and THE VIRGIN SLAUGHTER. J.G. Patterson, Jr. (DOCTOR GORE) produced and helped edit the film. The director regretted selling the rights to both AXE and his follow-up, KIDNAPPED COED (1975), so he combined the two films together (which are linked by actor Canon, who plays killers in both) and titled for BLOODY BROTHERS.
★★
Posted by The Bloody Pit of Horror at 11:11 PM No comments: 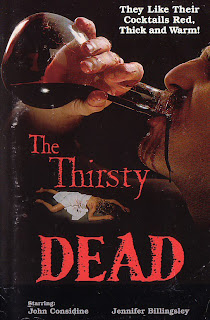 ...aka: Blood Cult of Shangri-La, The
...aka: Blood Hunt
Directed by:
Terry Becker
Stewardess Laura (Jennifer Billings- ley), go-go dancer Claire (Judith McConnell), Acme computer employee Bonnie (Chiqui da Rosa) and teenage beauty queen Ann (Fredricka Meyers) are abducted from the streets of Manila by what they assume is a white slavery ring. They could only be so lucky! Instead, the ladies are loaded on canoes, taken upstream and then dragged off deep into the jungle to service a hidden society of male and female cave-dwellers. After being locked inside a cell and dressed in skimpy loincloths, our heroines eventually discover that their captives need to drink the blood of women to retain their youth and vigor. Since Laura looks exactly like the blonde goddess high-ranking tribe member Radu (John Considine) saw in a dream and then painted, he and tribal queen Ranu (Tani Guthrie) insist she join them. She refuses and is tossed back in the cell with her friends. The ladies manage to escape with some help and the rest of the film goes from The Flintstones to THE MOST DANGEROUS GAME as the tribe hunts tries to track them down before they reach civilization.
Despite a premise that seems tailor-made to showcase sex and violence, the film is having none of it. There's little gore, zero nudity and it's rated PG! Not that it really detracts from the overall experience. This Filipino-lensed fluff is basically just a bunch of childish nonsense, thought not without its own odd charm. The acting is extremely uneven, but the cast are sincere enough to offset some off line-readings. The caves and jungle locations are decent. And what about those costumes? Hilarious! Why use boring old brown animal hides when you can dress each person in bright green, blue and pink pastels? It also manages to skimp by with just a tiny bit of blood and only one visual effect, a time-lapse rapid-aging. Director Becker is best known as an actor (and for his recurring role on the 60s TV series Voyage to the Bottom of the Sea) and prolific Filipino character actor Vic Diaz plays a police lieutenant and was also the production coordinator.
Something Weird handled the DVD release and have teamed it up with the even more bizarre SWAMP OF THE RAVENS (1974). I'm pleased with the purchase.
★★
Posted by The Bloody Pit of Horror at 9:16 PM No comments: 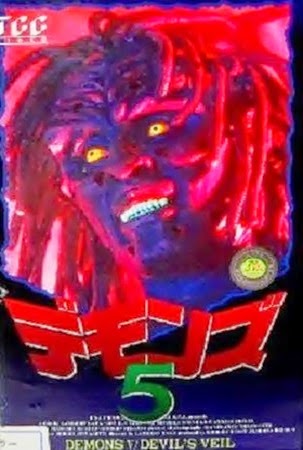 
Confused about the "Demons" series of films? Well you ain't the only one. This French / German / Italian / Portuguese / Spanish co-production from the director of Demons (1985), Demons 2 (1986) and The Ogre: Demons 3 (1987) was based on the same Nikolai Gogol story ("Vij") that was the basis for BLACK SUNDAY (1960), a film that's now considered a Gothic horror classic and was made by Lamberto's very talented father, Mario. Both Sunday and Demons 5 share the same original filming title and also have the spiked mask and resurrected witch story aspects in common, but this still isn't really a remake of the earlier film. The sequel title comes from Japan, where it was re-titled to follow Lamberto Bava's first two movies, Demons 3 (better known as The Church) and Demons 4 (better known as either The Sect or The Devil's Daughter). It was never English-dubbed or officially released in America. In fact, the only known version with English subs was released by bootleggers Video Search of Miami, who put out a very dark, very washed-out looking print of the film derived from a broadcast on Spanish TV.

Eight young people; four guys and four girls, manage to all fall into a deep ice cavern while skiing down a mountain. One of the girls - Sabina (Deborah Caprioglio, Klaus Kinski's buxom and much younger ex-wife) - injurs her leg, while another of the guys finds a frozen corpse with a steel mask over the face. A few of the boys decides to chip away at the ice until they can remove the mask. The Earth shakes, a guy is impaled with a giant icicle, Sabina's leg miraculously heals itself and they locate the backside of a church. They go inside, exit out the front door and find themselves in a deserted, snow-covered town populated only by a superstitious albino priest (Stanko Molnar) and his pet wolf. The priest informs them that they made a grave mistake removing the mask because it will awaken evil witch Anibas (Eva Grimaldi), whose fate is shown to us through flashback. Immediately six of the "teens" are possessed, start behaving strangely and attempt to kill Sabina and David (Giovanni Guidelli), apparently the only two virgins in the group. Even stranger, the names of the six possessed - Alexandra (Mary Sellers), Nora (Alessandra Bonarotta), Irma (Laura Devoti), Bebo (Michele Soavi), Andrea (Stefano Molinari) and Sergio (Ron Williams) - spell out "Anibas." There's another clumsy clue mirrored in the witch's name that I probably don't even need to reveal.

The premise itself is great. The discoveries at the beginning of the film with the cavern and that snowy ghost town are fascinating, and the art direction and sets that bring these locations to life is top notch. Unfortunately, once the possession portion sets in after about half an hour, the film becomes bland. Fans of the first Demons films will notice a considerable lack of action and gore. There are no hideous-looking, rotten demon-people running amuck that claw and infect the others. Instead, the possessions happen instantaneously and those possessed are not given any kind of makeup application to make them look intimidating. It seems like they saved up their fx budget for the witch when she finally materializes.

It's also difficult to really get swept up in the atmosphere since the characters are pretty much all obnoxious, annoying and stupid. I don't know about you, but under the circumstances (one girl injured, one guy dead and trapped underground in a freezing-cold ice crevice) I wouldn't be laughing and cracking jokes. A few girls lose their tops and there's a demon sex scene, but that's about it. Simon Boswell provided the disappointing and forgettable score.