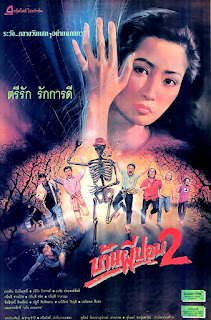 
Following up immediately after the events of THE HOUSE OF POP (1989), this takes place in the same village on the same sets, features the same actors playing the same characters and was likely made by the same director and crew. I'd even tell you who some of those people were if I spoke Thai! We open with about five minutes worth of flashbacks to the first film cut through the credits to bring us back up to speed. At the end of the first (spoiler alert), things were left up in the air after the gut-eating grandma transferred the phi pop ghost to the village chief's nut job / murderous daughter by puking white foam into her mouth. However, no one was around to witness any of that and only found granny's skeleton. As far as everyone's concerned, the phi pop is gone and they can all breath easy. They'll soon find out otherwise, especially after the hunter from the first film is attacked, killed and has his organs pulled out and consumed. 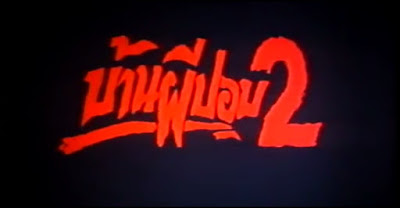 After the mercenary's corpse is discovered by the side of the road, Dr. Ret (Ekapan Banleurit) and Plapleung (Trirak Rakkarndee) report to the village chief. He, of course, has no clue his own daughter, Kradeung, is actually the culprit even though she's recently been behaving strangely; alternating between being bedridden / deathly ill and running around teasing / trying to seduce pretty much every guy in the village. The chief's assistant, whose name is (I think) Chuchuan (Tongchai Prasongsanti), and the three fraidy-cat villagers from the first film are still around to do dumb things, drink, mug and run around scared. The really old man is back, as well, for some denture comedy and to react to Kradeung's seduction antics by bolting through the village in exaggerated hyper-speed until he collapses. A minor side story finds Chuchuan falling in love with an equally-goofy woman who's just moved to the village with her family. 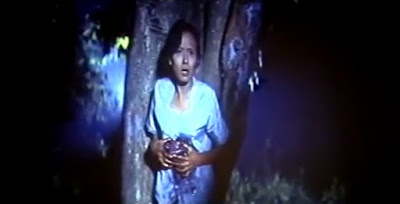 A young woman fresh from getting an abortion (!) hobbles around at night clutching her crotch and finally collapses by some large clay pots. She begs an older woman passing by to help her. Instead, the lady strangles her, reaches her hand inside her stomach, rips out her intestines and starts eating them. That'll teach her! This being a sequel, I guess they decided to go bigger as this has not one, but two, phi pop ghosts. The older phi pop is named Ya Yip and is played by Natanee Sitthisaman, who'd reprise this same role in most of the eleven (!!) other sequels from here on out. It's also worth noting that the original only had a couple of kills and this follow-up already has two in the first 15 minutes and both are gorier than anything seen in the first. But if you think this is going to correct what didn't work in the previous film, and adjust the horror / comedy balance so it doesn't feel so out of whack, you're setting yourself up for disappointment here. 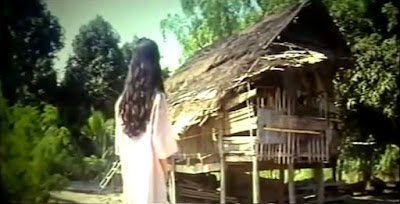 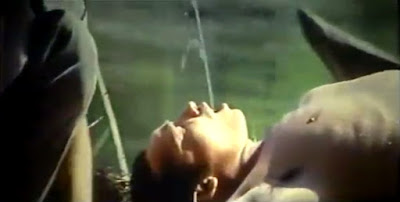 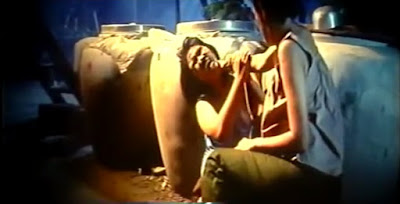 The serious horror that marks the beginning is not at all indicative of what follows. The doctor and girlfriend characters, who had some sweet moments in the original and helped level the comedy a bit, are both pushed aside as the not-particularly-funny bumbling idiot characters take center stage. This then deteriorates into a bunch of silly comic set pieces. I don't mind physical comedy and slapstick as long as it's clever and choreographed well but that's not typically what we get here. I'm not even exaggerating when I say that about half of this movie consists of frantic people running around in the jungle. Even more disappointingly, this recycles a lot of the same gags already seen in the first. The idiots are still spying on women bathing in sarongs hoping to get a peak. And still running around throwing their hands in the air, climbing up trees and screaming (all sped-up) at any ghost sighting. And still trying to cop a feel, this time up through some floor boards. I guess at least this time they didn't break into a home beforehand. 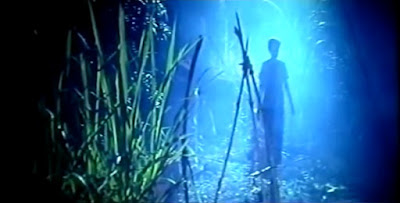 Little is done with the two female phi pop ghosts, though they do encounter each other a few times. We get a little fighting and some really clumsy (and understandably brief) wire work as the younger rips out the guts of the old one. Toward the end, we get the phi pop's chasing both each other and the rest of the cast around for what feels like an eternity. The chases are almost always fast-forwarded but in one instance a single shot of the ghost running past people is put in slow motion and lasts almost two minutes! There's also a witch doctor character who has a talking parrot and a walking, talking skeleton, but he's only really around to clue our heroine in to how to get rid of the ghost, which involves impaling it with candles.

Since Thai audiences couldn't get enough phi pop, a second sequel, Baan phi pop 3 / THE HOUSE OF POP 3 (1990), was released the same year. And there were other 1990 phi pop movie releases, including Phee pop hian ("Pop Is Strong Enough") which also featured Banleurit and Rakkarndee.