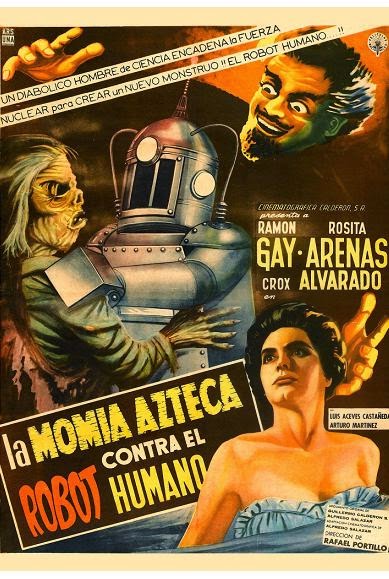 
Sometimes going into a movie completely blind is a good idea. Other times it's not. In this case, I probably should have done my homework before jumping right to the third film of this particular series I was unfamiliar with, but I honestly didn't know this was the third film of a series when it popped up on TCM Underground at 2am. All I know is that I saw "mummy" and "robot" in the title and I just had to see it. The good news is that I didn't really have to see either The Aztec Mummy (1957) or The Curse of the Aztec Mummy (1957) beforehand to follow what was going on here. The filmmakers were kind enough to recycle footage from both of them. As a matter of fact, around 2/3rds of this film's 65-minute run time is a flashback recap to the previous installments. While that personally helped me catch up on what I missed, it also puts this into that lazy cash-grab category that's really impossible to defend.

Dr. Edward Almada (Ramón Gay), his wife Flora (Rosa Arenas) and his assistant Pinacate (Crox Alvardo) invite two scientists over to their home and then go into great detail about their previous run-ins with both a resurrected mummy and the evil Dr. Krupp aka "The Bat" (Luis Aceves Castañeda). We learn that Flora is the reincarnation of Xochi, an Aztec maiden set to be sacrified by her village. She, along with her warrior lover Popoca (Ángel Di Stefani), are apprehended and killed when they try to flee. Popoca still lives on as a mummy in the temple ruins, springing to life any time someone lays a finger on a valuable bracelet and gold breastplate. After an unsuccessful attempt to raid the temple, the mummy's home crumbles to the ground and he's forced to relocate to a cemetery crypt. Dr. Krupp and his acid-scarred accomplice Bruno hypnotize Flora into helping them locate the mummy. They take his treasure (again) and then face dire consequences when the mummy crashes the lab, basically kills all the bad guys and then goes back to his resting place. All of the events listed above are from the first two Aztec Mummy films... and now we only have about 20 minutes left!

In the new footage, Edward and Pinacate discover that Dr. Krupp actually managed to escape the snake pit the mummy had thrown him into through a trap door and is up to no good again. He steals some radium and a brain and constructs a radio-controlled "human robot," which is basically one of those box robots with cylinder arms with the addition of a human head enclosed in a glass bubble. They bring it to the cemetery and into Popoca's new resting place to see if it can defeat the mummy. Unfortunately, the guaranteed campy showdown between the bucket of bolts and the heap of dusty old rags ended prematurely after a prolonged bear hug and just a couple of shoves. Oh well, I enjoyed it while it lasted. All 30 seconds of it.

The film was acquired by K. Gordon Murray 's American International for U.S. consumption and, along with the second film in the series, was sold directly to TV. As a public domain title, it's been released by just about every label under the sun. In 2006, BCI Eclipse released all three movies on one set.