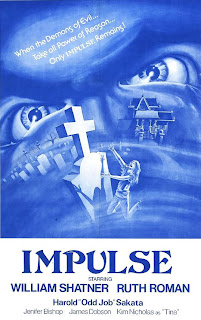 
I was so excited when I learned this was coming out on DVD (from Tango Entertainment) that I blind bought it. I should have done my research because unbeknownst to me I was getting the edited-for-TV version. I think it says something that even in its cut form that this film still retains most of its camp charm and entertainment value. And I think it says even more about how idiotic U.S. censorship is and always has been that the version passed as OK to air on TV bleeps out mild profanity like the word "bitch" yet has no issue leaving in a scene where a man tries to force a little boy to watch as he rapes his mother! That's actually the very first thing we see here. It's shot in black-and-white and features none other than William Kerwin (aka "Thomas Wood" or "Thomas Sweetwood"), who'd previously starred in Herschell Gordon Lewis' drive-in gore classics BLOOD FEAST (1963) and TWO-THOUSAND MANIACS! (1964) as the drunken soldier who ends up getting impaled with a samurai sword by a young boy only wanting to protect his mama. As we soon see, that little boy has grown up to be quite the sick-o himself. 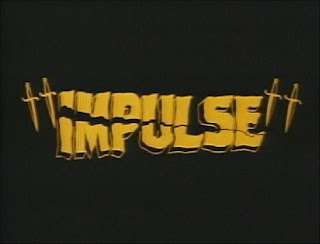 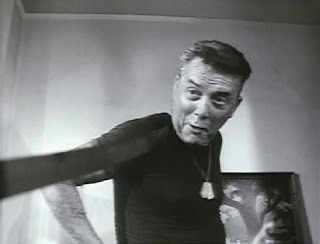 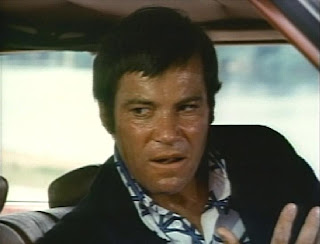 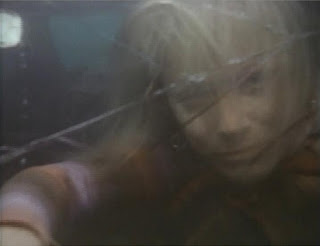 Leisure-suit-clad con artist, gigolo and psycho Matt Stone (William Shatner) is first seen in the presence of an statuesque exotic dancer. But his current, rich, older lover Helen (Marcie Knight) knows the score: "Nobody's just friends with a belly dancer!" She's fed up with his lying, his fooling around and her having to support to his ungrateful ass, so she decides to call things off. Matt has other ideas. During a fight, he strangles her to death, sinks her car in the river and then starts chewing on his pinky finger; a nervous reaction to stress that he's had since childhood. (Hilarious!) Matt promptly checks out of his hotel and plans to move on to a new town and greener pastures. Meanwhile in suburbia, young and attractive widow Ann Moy (Jennifer Ashley) is trying to get her disobedient, bratty little girl Tina (Kim Nicholas) off to school. After snatching more money than she asked for out of mom's purse, Tina decides to ditch school to go to a graveyard where her much-missed father is buried. She even hitches a ride to get there.... from Matt Stone. 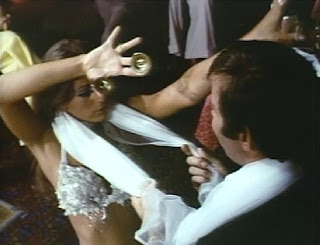 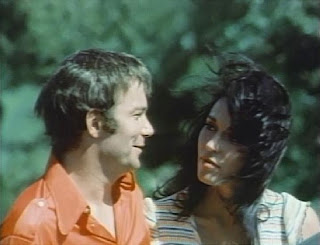 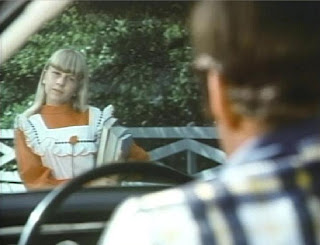 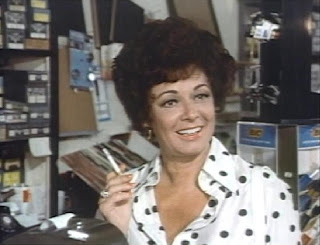 Because Ann's been single and "hiding" for far too long after the death of her husband, her best friend, wealthy fellow widow Julia Marstow (Ruth Roman), decides to play match maker and set her up with an eligible bachelor she's just met. His name is, you guessed it, Matt Stone. Matt puts on the charm and concocts a whole new bullshit story about his life, childhood and job, claiming he's a successful land developer and Wall Street investor. He and Ann hit it off at Julia's dinner party and next thing you know they're on their first date at the zoo. With Ann out of earshot, Matt calls a woman who accidentally bumps into him a "Fat bitch" and then informs her that "People like you oughta be ground up and made into dog food." Little Tina isn't taking too kindly to her mother being gone so often now and being romanced by a new guy. She purposely destroys some antique china and then starts to spy on her mom and Matt. When Julia stops by and asks where her mom might be, Tina scowls "Why don't you check the motels!" (lol) and knocks over a tray of glasses. 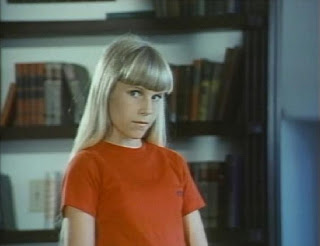 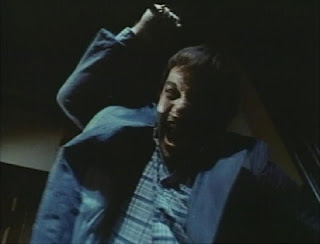 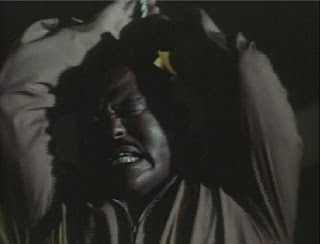 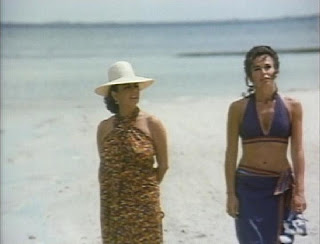 Karate Pete (Harold "Odd Job" Sakata), Matt's former partner-in-crime, shows up in town fresh from prison and looking to collect on an old debt. Matt tries to hang him, kicks him, chases him through a car wash, runs him over several times with his car and then dumps the body. Tina was hiding out in his back seat the entire time and Matt happens to see her running off. Tina tries to confide in both her mom and Julia, but because of her history of lying and doing extremely bratty things, no one believes her until it's too late. Matt's able to bilk 10 thousand dollars off of Ann for an "investment" and makes a go for Julia, too, but when she says she'll have her lawyer look into Matt and his business dealings beforehand, Matt decides to break into her home, stab her and raid her safe. He's in for a rude awakening though as Julia keeps no cash or real valuables in there. Again, Tina witnesses the crime. Matt chases her through a graveyard into a funeral home until she falls down a flight of stairs, then crashes a viewing and starts pushing the grieving people around! There's an attempted fish tank drowning and a history-repeats-itself style ending. 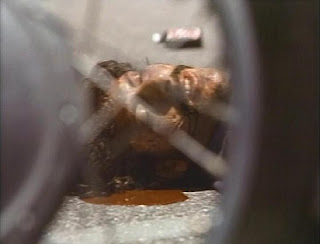 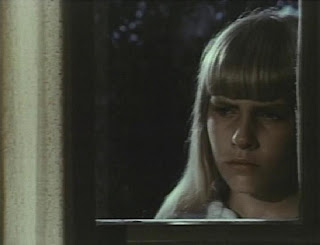 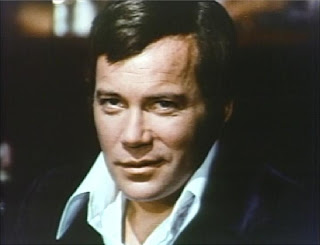 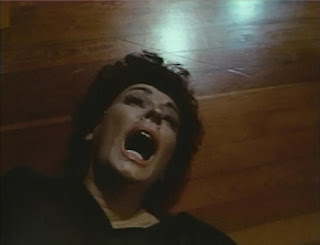 This may be trash. It may even be - in some eyes - a career low point of both Shatner and Roman (nah!) but it's just too damn entertaining to pass up if you enjoy lower-budgeted, regionally-produced 70s thrillers. Most of the cast does well, with special mention going out to young newcomer Nicholas, who's positively perfect as the precocious little brat who gets more than she bargained for trying to put a damper on mom's love life. Of course most are probably going to tune in for Shatner and his fans shouldn't be let down by his high camp role. He gets to scream, cry, freak out, give belly dancers lascivious looks, nervously bounce up and down, berate chubby woman and go on several crazy rants. Marcy Lafferty, Shatner's real-life wife (at the time) has a small role as a hotel desk clerk Matt bangs on the side. The two would also appear together in the great KINGDOM OF THE SPIDERS (1977). James Dobson also has a couple of scenes as Julia's friend. 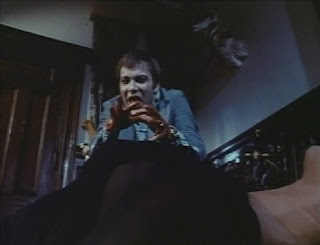 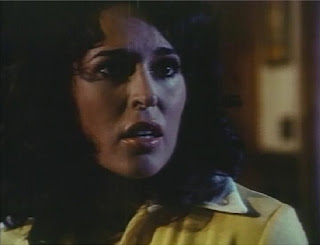 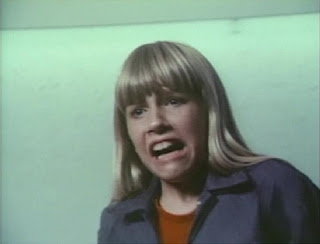 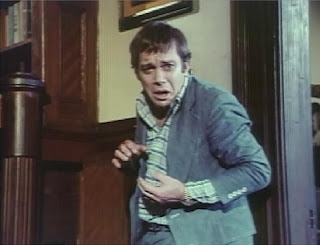 Director Grefe also made STING OF DEATH (1965), DEATH CURSE OF TARTU (1966), STANLEY (1972), WHISKEY MOUNTAIN (1977) and MAKO: THE JAWS OF DEATH (1978). Most of those were filmed in his home state of Florida and did well at drive-ins during their day. I'm not quite sure how to rate this one. It's pretty funny much of the time (which is hardly intended), and yet it's reasonably well made on a tight budget, fun and entertaining.