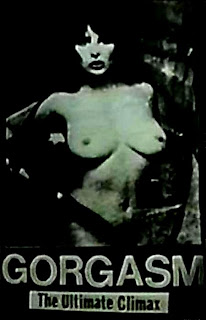 Heading off this evening's shot-on-video double feature (to be be concluded with a viewing of the even-more-obscure THE HACKERS) is Draculina magazine publisher Hugh Gallagher's GORGASM. Things begin with a man sitting behind a desk giving a to-camera confessional... "He created us in his own image. Kind of scary, don't you think? I mean, everyone I know is an asshole. I think the world is being governed by a giant asshole." That bright analysis on life is offered up to us by Chase Nicholas (Rik Bullock - who looks sort-of like Clancy Brown), a frustrated, chain-smoking detective who has spent the past two years sitting behind a desk. While some of the more established officers are away on vacation, Chase's hard-nosed female boss (known only as "Sarge" and played with cue-card-reading emotative ability by Paula Hendricks) finally gives him the chance to get out there and "poke around" at an actual crime scene where a man has been tied up and murdered. Someone is obviously targeting guys who are into S&M, as evidenced by the porn tapes "Whip Me, Beat Me, Love Me" and "Sadist's Slave Stable" found at the crime scene. A sex trade ad is also found there, including one for "Gorgasm: The Ultimate Climax." Chase wonders "What kind of people could be into this shit?" 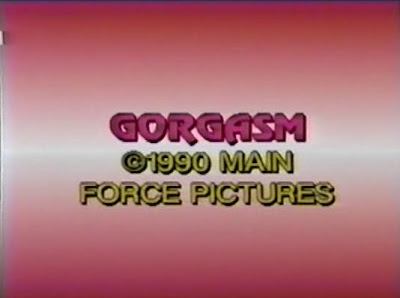 The 'killer' turns out to be a sexy, large-breasted woman named Tara Gross (played by one-hit-wonder Gabriela), who is first seen dancing around topless to a song called "I'm Your Sex Toy" before slashing a guy's throat and licking the bloody knife. Tara is using the Gorgasm ad to lure victims into her clutches, then kills them and empties their bank accounts. She's also deranged enough to sit at home and berate a mannequin. Soon falling into her scheme are Nicole (Paula Gallagher, the director's wife) and Byron (Kevin Patterson), a couple having relationship issues. He wants her to beat him. She confides in her co-worker Connie (Debbie Patterson) that "He's the only guy I know who can get a hard-on watching Friday the 13th movies!" But her friend tells her she should fulfill her man's wishes and kink it up a little bit because her boyfriend likes to wear women's clothes and it isn't that big of a deal. Nicole decides to get a dominatrix outfit, but doesn't get much of a chance to whip Byron into shape because Tara gets to him first. She chops up Byron's face with a weed whacker (?) and then strangles Connie with a cord. 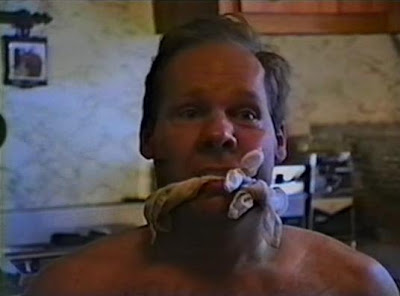 Following clues leads Chase to a classy adult bookstore that charges a 50 cent "browsing fee" (!) and then to an obnoxious smut peddler and publisher (Flint Mitchell), who hands over the mail that's come in from the Gorgasm ad after Chase flashes his badge. He discovers that another schmuck named Bill (Dave Johnson) has answered it, but before Chase can question him, Tara decapitates him with his garage door opener (?!) Hey, at least they tried to be original! Eventually, Sarge hands Chase's case over to one of his co-workers, but Chase (now obsessed with the case) refuses to hand over the information he has acquired and decides to continue investigating on his own. He puts an ad in the trade claiming to want "The Ultimate Climax." After seducing a drunk guy, bashing a wine bottle over his head and have implied necro sex with him, Tara finally answers it... 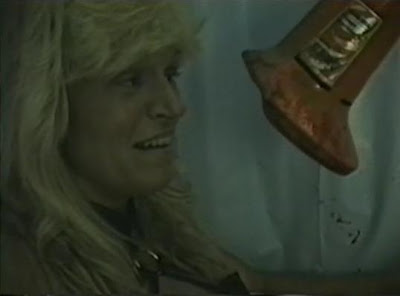 As a cheapie, videotaped exploitation film, this one pretty much delivers on what is expected of it. There's blood and nudity aplenty, as well as numerous technical guffaws typical of the budget range. Aside from the lead actor (who had previously appeared in the fun zombie flick FLESHEATER [1988], moved up to a small role in Romero's THE DARK HALF [1993] and has more recently had small roles in the genre pics NEW TERMINAL HOTEL [2009] and DEAD ABOVE GROUND [2011]), the acting is awful. However, unlike most other comparable films, the plotline itself isn't too bad and interesting enough to keep you watching. Unfortunately, the actual finale - and horrendous fight choreography contained therein - is laughable. I'm not sure who our lead actress Gabriela is (one source I read claimed she modeled for biker and men's magazines), but whoever she is, she can't act a lick but looks great naked. Proving this to you means I'll probably get flagged for adult content, but I can't always expect you to take my word on these things, can I? 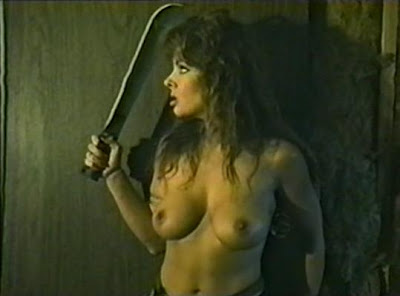 The trip to the adult video store is kind of interesting, too. There we get to see lots of close-ups of posters and VHS boxes for films like FLASH! and THE DRESDEN DIARY (future Scream Queen Michelle Bauer can even be seen on the latter's cover). There's also some beyond-R-rated graphic nudity here, including a full-frontal transsexual on a poster and some grainy home video paddling footage which shows all the gynecological goods. Said footage probably kept this title out of many video stores. Instead, this one was a male order only title upon release. In addition, there's plenty of original rock music. A couple of the songs are OK, but the theme song (by Pearl E. Touch) is ear splittingly annoying. 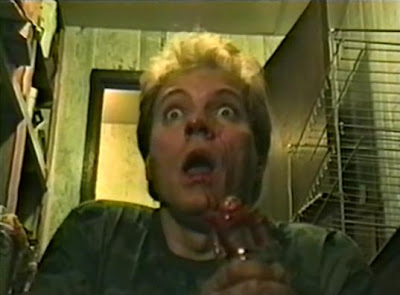 The director had previously made an ultra-obscure film called DEAD SILENCE (1989), which I can find almost no information on, and followed this one up with two unrelated pseudo-sequels; GOROTICA (1991) and GORE WHORE (1993). He also directed something called EXPLODING ANGEL (1994) starring Gunnar "Leatherface" Hansen and the Debbie Rochon-hosted 'zine DRACULINA VIDEO MAGAZINE (1996), before producing some of Jess Franco's later films for One Shot Productions.