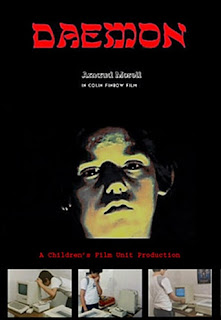 
Not sure what was going on in the UK in the 70s and 80s but they seemed to churn out more than their fair share of "kid-friendly" stuff seemingly designed to traumatize children. There was the dangers of playing around water commercial The Spirit of Dark and Lonely Water (1973), with Donald Pleasance voicing a sinister Grim Reaper-like character luring children to their death, the kids-mangled-by-farm-equipment short APACHES (1977), which featured little kids getting killed by being run over, crushed, stabbed by a pitchfork and drowned in manure (!!), Building Sites Bite (1978), kind of a warped Groundhog's Day featuring a young boy dying over and over again in a variety of ways while messing around construction zones, their annual Ghost Story for Christmas specials and much more. A lot of these played on TV and in schools to try to scare kids straight and are still fondly remembered to this day. In 1983, a children's drama school thought it was a good idea to showcase their young talent roster by letting them play possessed devil worshipers and zombies in the notoriously inept and shot-on-video SUFFER LITTLE CHILDREN (1983). And then we run into the product of The Children's Film Unit, which churned out a few horror tales aimed specifically at kids. Some of these played theatrically or at film festivals. Others debuted on TV. Most eventually played on Channel 4 at times when they knew kids would be at home (after school, on weekends, holidays) looking for something to do. 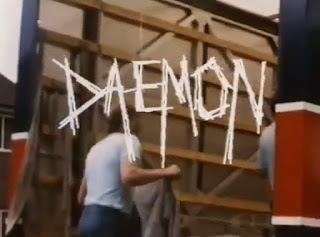 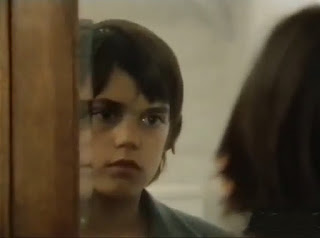 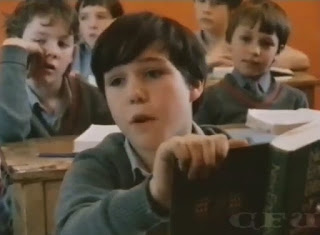 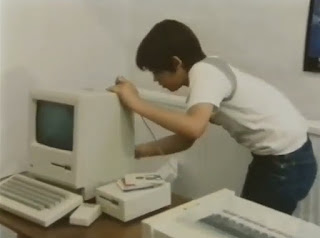 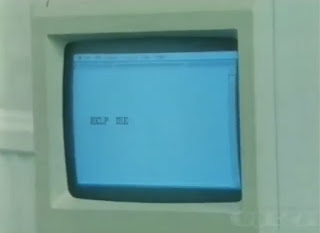 Because the father just got a higher-paying job, the Foster family relocate to a new city and buy a big new house in a "posh area" of town. The parents are both away in the U.S. (and are never once seen in the film), leaving always-preoccupied teen daughters Sally (Donna Glaser) and Jenny (Sadie Herlighy), and younger Nick (Arnaud Morell), in the care of incompetent Swedish au pair Helga (Faith Steemson). Almost immediately, Nick starts showing signs of possession; occasionally speaking in an altered, deeper voice. At his new private school, Nick's not having it much better. There's an older bully who steals his money and most of the snobby kids there ostracize him, except for another new boy named Sam (Orlando Swayne), who was treated the same exact way when he arrived. During a scripture class, teacher Mr. Crabb's (Bert Parnaby) planned topic of talking about Moses and The Ten Commandments ends up switching to talk of Satanism, black masses and demons, prompting Nick to mutter "Help me" in his new demon voice. 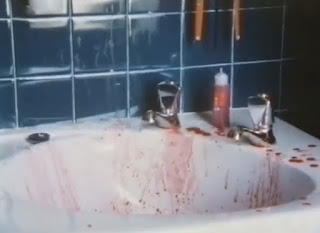 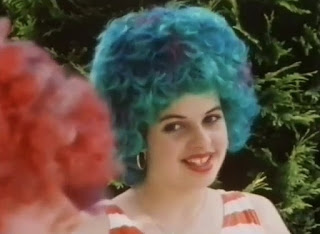 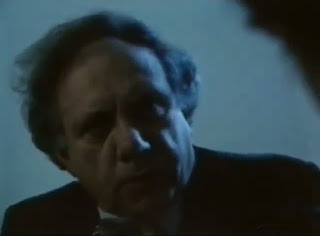 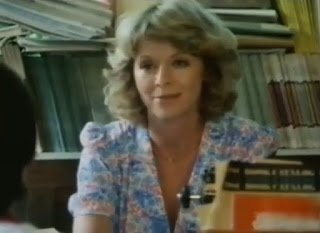 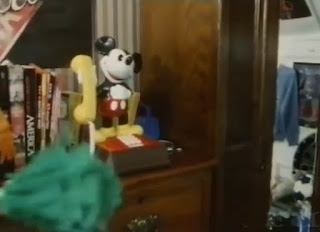 Nick is kept awake at night by the sounds of creaking, has nightmares of fire, develops blisters all over his feet and elbows that heal overnight and then come back again the next day and is struck down by depression. Not even a present from his parents, a brand new computer, can make him happy, particularly since the spirit inhabiting the home keeps using it to spell out messages ("Help me") and keeps blowing the fuse in the plug in the process. In his religion class, they discuss the Antichrist, 666, renting sex films (!) and whether or not Satanists conduct black masses while in the nude, which puts all kinds of ideas in Nick's head. Sister Jenny, who recently permed and dyed her hair so that it resembles a green clown wig, recommends he visit shrink Rachel King (Susannah York), who helped her through her own identity crisis. 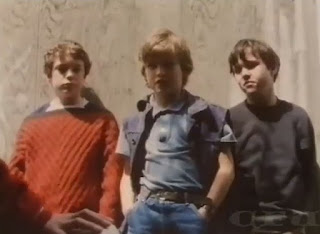 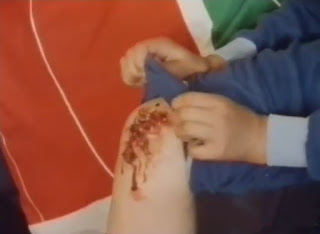 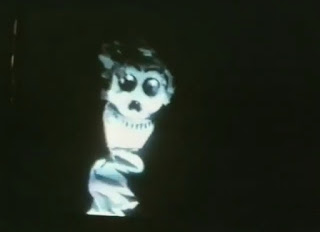 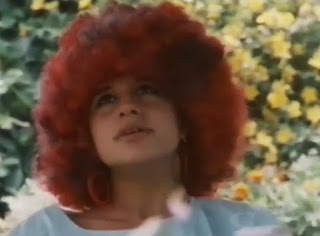 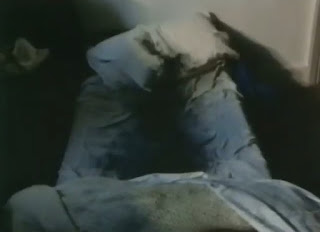 Nick starts seeing Dr. King but then comes down with a fever and breaks out in sores that's misdiagnosed as chicken pox, so they quarantine him at his school (?!) Mr. Crabb comes to the conclusion he's possessed, especially after seeing he's been sweating black, so he draws a cross on the door and sneaks a crucifix into his desk but ends up dead at the bottom of the stairs. Nick's classmates suspect the new boy is responsible and hatch a plan. Since Nick's parents are gone, his shrink will be out of town, the au pair will be visiting her boyfriend and his sisters will be at an all night dance party showing off their multi-colored afros, Sam decides to spend the night so he can leave a window open for some other boys to sneak in. To do what? Well there's mention of killing him, and they show up brandishing garlic, a hammer and a wooden stake, but they never even make it inside. The mystery behind Nick's strange behavior is finally revealed after a wall cracks open to reveal a hidden chimney and something hidden inside. 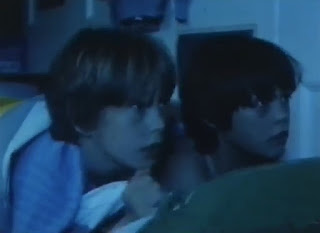 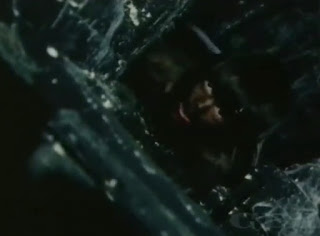 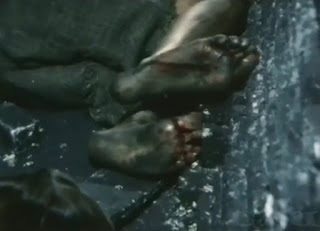 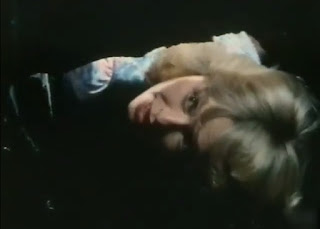 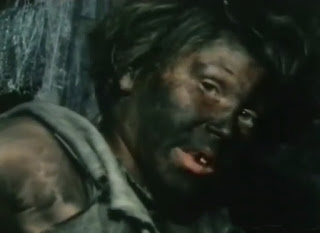 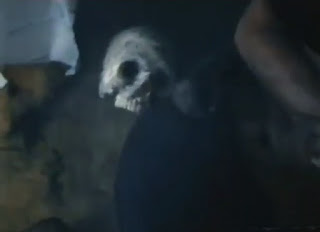 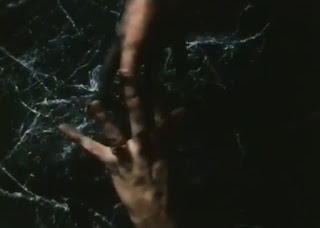 I tried to watch this from a kid's perspective but seeing how the kids in this film sit around name dropping stuff like The Exorcist and The Omen, I realized most have already seen better examples of this type of film. As for adult viewers, there's little of interest here unless one's looking for a nostalgia kick. There's a decent Amityville-inspired music score from David Hewson but this is very tame, cheap, unscary and unoriginal, most of the acting is amateurish and the visual highlight is a Mickey Mouse phone. At one point a boy is watching another bad / cheap horror movie on TV and says, "God, this program's crap!" Indeed.


I wasn't sure how acclaimed actress York (a Cannes and BAFTA winner, who'd also been nominated for an Oscar and several Golden Globes) ended up in this until I discovered she was a patron and endorser of Children's Film Unit. The CFU operated as an educational charity and gave older children (ages 10 to 16) the opportunity to work on feature films and be involved every step of the way in the filmmaking process. Founder / director Finbow had previously made a 1972 adaptation of Bradbury's Something Wicked This Way Comes and then several more kid's horror flicks for the CFU, including the post apocalyptic Dark Enemy (1984), the monster movie Under the Bed (1988) and the backwoods survival tale Survivors (1990).