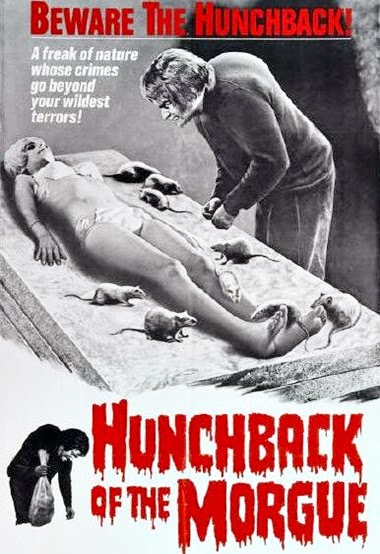 
Clearly one of the better efforts from prolific Spanish horror legend Paul Naschy, who also wrote the story and screenplay under his real name Jacinto Molina, this merges an old-fashioned Universal-style plot and a better-defined and more sympathetic "monster" with a heaping helping of gory dismemberments, decapitations and other nasty stuff to entertaining effect. In a remote Austrian village, simple-minded and somewhat child-like hunchback Wolfgang Gotho (Naschy), who has endured years of torment, harassment and abuse due to his appearance, has fallen in love young beauty Ilsa (María Elena Arpón - Tombs of the Blind Dead); a former childhood playmate and one of the only people to ever see his inner beauty. Gotho brings flowers to her every day and thinks she'll be cured, but Ilsa's illness finally takes her life. Some local medical students who hang out at a tavern push him around and he strikes back by killing a number of them, stealing Ilsa's corpse and then retreating to some elaborate underground catacombs hidden beneath a cemetery. While Gotho is away one day, rats get to Ilsa's corpse and partially eat it. But his love might have a new lease on life thanks to the arrival of brilliant-but-mad Dr. Orla (Alberto Dalbés), who works as a professor at a local college and has been experimenting on reviving the dead.

Since he can't get university funding, Orla decides to take advantage of the situation and of the naive and easily-manipulated/blackmailed Gotho; in exchange for letting him move his lab to the underground lair, Orla promises to revive Ilsa. Well, until Ilsa is thrown into a vat of sulfuric acid by some incompetent grave robbers, after which the doctor promises to create him a new mate altogether. Well, if he agrees to help abduct women from the Feldkirch Woman's Reformatory ("The girls there are garbage and no one will miss them!") to use in the experiments. After all, his ever-growing monstrosity, referred to as "The Primordial" and which quickly grows from a vat of bloody goo to a big slimy monster that must be restrained in a cell, needs constant nourishment or else it gets a little temperamental. Aiding Orla in his experiments (at least for a short while) are assistant Dr. Frederick Tauchner ("Vic Winner"/ Víctor Alcázar) and his girlfriend Dr. Maria Meyer (Maria Perschy - in her first of four Naschy film appearances), who runs the reformatory. They both have reservations about what Orla is up to and are basically in the dark about the murders and kidnappings. Ditto for the beautiful and compassionate Elke (Rosanna Yanni), another employee at the girl's reformatory, who seems to fancy Gotho in a romantic way. Must be all that, uh, foot kissing.

While Hunchback is certainly no masterpiece of the genre (the editing and scene transitions in particular are awful and seem to really torpedo the final 20 minutes), the film delivers big time when it comes to everything-but-the-kitchen-sink style entertainment. For starters, it's very gory and has some surprisingly nasty scenes. Hands and feet are removed from corpses, guts are spilled, bodies are dissolved in acid, rats chew up a face and there are no less than three bloody decapitations. Rumor has it that during one of the decapitation scenes, the producers managed to get permission to use a real corpse (!) but Naschy was unable to actually go through with actually severing its head! However, he was able to go through with setting a bunch of real rats on fire with a torch. Those were the pre-Peta days, I know, but I personally hate watching that kind of stuff. Your reaction to it will just depend on what kind of person you are, but those scenes admittedly do add to the overall shock value. The gooey monster design at the end is also surprisingly good. The cinematography isn't particularly good, though it's adequate. The score is also uneven, but the most frequently used central theme is somewhat moving. The sets and art direction are all pretty good.

Of what I've seen to date, this has got to be my favorite of Naschy's roles and he's much more impressive here than he is as his more famous El Hombre Lobo character. Though not on the same level as Karloff, Chaney Sr. or Laughton, he's able to at least capture some of the endearing innocent qualities found in classic horror characters such as Quasimodo and the Frankenstein Monster. And despite the fact he's frequently kidnapping and killing people, it's hard not feeling at least a little sorry for the societal outcast as he's pelted with rocks by an army of annoying kids, being mocked by drunks, being tricked into supporting a madman's schemes or trying to make the last days of his ill-fated friend better. Both Gotho's good and bad behavior seem mostly motivated by love, and when you factor in his stunted mental state with the amount of ridicule he's suffered over the years, it makes his actions at least palpable and thus a bit more interesting than usual for this kind of things. The other actors playing primary roles in the film are decent, too. Smaller parts are played by Manuel de Blas (THE GHOST GALLEON) and Antonio Pica (who also appeared alongside Naschy and Perschy in BLUE EYES OF THE BROKEN DOLL) as the obligatory detectives, Franco regular Antonio Mayans as one of the med students and Ángel Menéndez (NIGHT OF THE WALKING DEAD) as a police chief.

The film won some European festival awards but wasn't released theatrically in the U.S. until 1975 by Jerry Gross' Cinemation. The original American VHS release was from All Seasons Entertainment, a division of Midnight Video, who would also release the Naschy films VENGEANCE OF THE ZOMBIES (1973), Devil's Possessed (1974), EXORCISMO (1975) and Human Beasts (1980). As far as DVD releases go, the only one of note seems to be the 2005 release from the German company Anolis Entertainment titled Die Stunde der grausamen Leichen (which roughly translates to "The Hour of the Gruesome Corpses"). The language options for it include Spanish, German and English, it has a German-language commentary track from Naschy (which also have an English subtitle option) and comes with lots of other goodies including a 32-page booklet, a mini documentary and a German Super 8 version of the film. The company only issued 3,000 copies though and it's currently out of print. The original uncut version runs just 82 minutes, and some versions substitute a "clothed" Yanni for a briefly topless Yanni for the hunchback love scene.