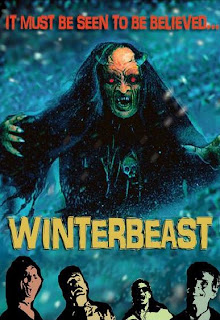 
A guy with half his face ripped off pulls out his guts. A sloppily-animated "creature" with tentacles that looks like it belongs in a child's toybox roars. A screaming man falls against a tree and a smiling skull pops out of stomach. Never fear, it's just a nightmare... I think. The editing in this one's sloppy to put it mildly. Somewhere in the mountains, a bunch of rangers have set up a new station near an abandoned former tourist trap which used to be a popular vacation destination and ski lodge. For some strange reason, the place was swingin' back in the 1950s before dying out. Now investors want to try to reopen it. Sheriff Bill Whitman (Tim R. Morgan) finds out someone or something has roughed up female ranger Sally (Lissa Breer), only she can't remember what happened. Bill sits down with Sally's smarmy and thoroughly annoying co-worker Stillman (Mike Magri) to drink whiskey, look at vintage nudie magazines and talk nonsense. Another of their ranger buddies went up on the mountain days earlier and never came back, so the duo plan to go to the newly-opened Wild Goose Lodge to look for him. Meanwhile, a frizzy-haired chick strips off her top and a stop-motion-animated tree grabs her through the window and throws her against the side of her house (!!!) Whaaaa? 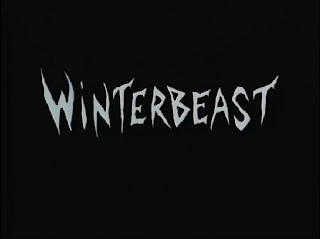 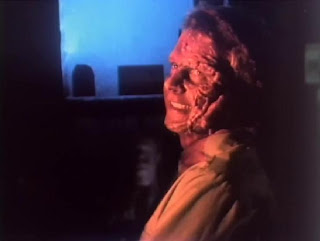 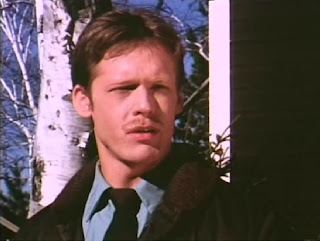 With the Fall Foliage Festival coming up, Wild Goose Lodge owner Dave Sheldon (Bob Harlow) doesn't want to comply with the ranger's wishes to keep guests off the mountain until the missing ranger is found. It seems the locals know better than to go up there since disappearances, unexplained deaths and half-eaten corpses are the norm. Oblivious tourists on the other hand, do not know this. Two female hikers fall into that category and find themselves being gobbled up by some bug-eyed hairy thing that pops up out of the ground. And so does a mountain-climber, who gets his head ripped off by some alien-looking thing with a bendy neck. Sally does know better, but that doesn't stop her from going to the mountain, finding a grave and getting killed by a blue-faced zombie-mummy. Somehow, Mr. Sheldon gets ahold of her body, brings it back to his lodge and strings it up in the lobby. He's a bit of a psycho it seems, loves lip syncing to children's songs, puts on a clown mask and dances for his collection of shrivelled corpses. I'm completely lost by this point. 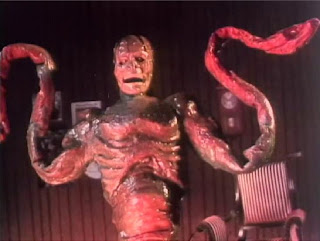 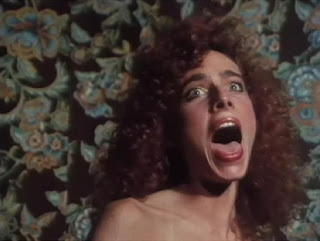 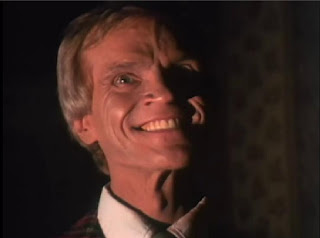 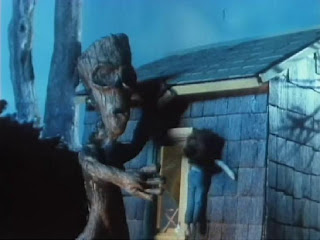 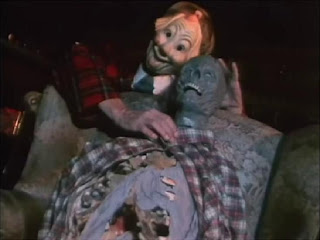 We hear much speculation about what's causing all this senseless crap. All along the mountain are Indian charms which supposedly ward off evil, but clearly aren't quite doing the job. Someone says the area is the "Indian gateway to hell." Many characters mention a demon called a Chakira (or is that Chikaru... everyone in this movie seems to pronounce it differently). Indian general store owner Charlie (Charles Majka) and his girlfriend Barbara (Dori May Kelley) even own what is reputed to be a Chakira tooth. We see the Chakira reborn by bursting out of some random man's stomach in a flashback. Mr. Sheldon knows something about it or is somehow involved, but his head erupts into flames and his face melts before he can divulge too much information. I tried following this movie but it's an impossible task. During the last twenty minutes, Bill sends Stillman to chop down an ancient totem pole against the Indian general store owner's wishes. (Uhhh, why?) The pole comes to life and scares him off. Next thing we know, Bill and Stillman are in some ghost town looking around when a giant lizard shows up to chase them around. It eventually bites Stillman's head off. I can't go on! 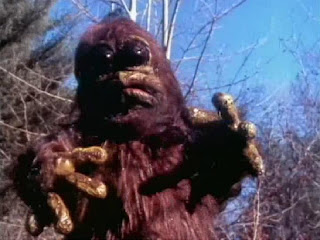 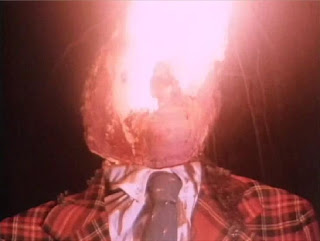 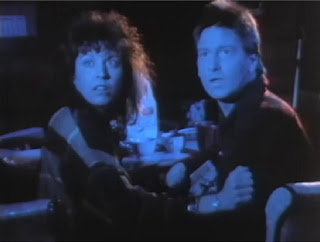 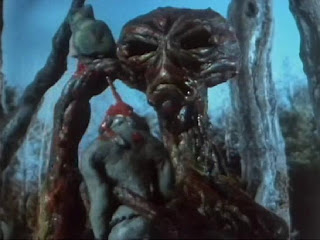 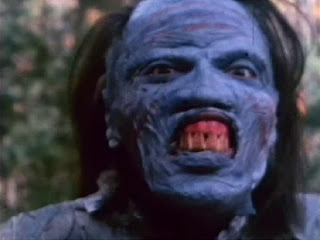 Let me start by saying that I am a huge stop-motion animation fan. I even love badly-done stop-motion animation. Hell, I even loved a lot of the hokey sfx in this one, but it's hardly worth slogging through the rest of this inept, confusing mess to see them. Shame because this really could have been a lot of fun if these people had a clue how to make a movie. Characters will appear and then disappear for no reason or will be going somewhere with someone and when they get there be with someone else. That's just the tip of the iceberg when it comes to continuity problems. I think I've already established that the plot makes zero sense. There are some flubbed lines and people clumsily stumbling over their dialogue. The audio recording is pretty muffled at times and much - but not all - seems to have been dubbed in later. It's also one of the most ineptly photographed films I've ever seen, taking you from a beautiful shot of the evening sky to a close-up so blurry or grainy that it looks like it was filmed by a completely different person with a completely different camera. Some viewers find all of this engrossing in a track wreck kind of way. I was right there with them... part of the time. 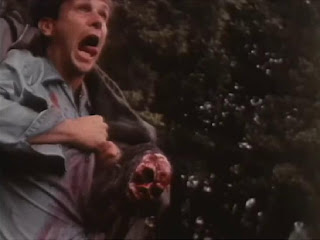 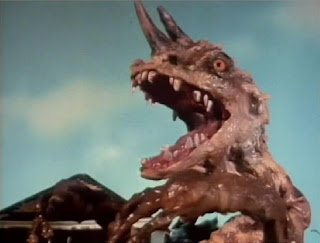 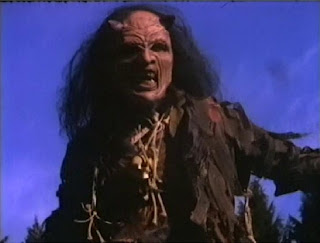 Stories vary online for this title depending on where you get your information. IMDb currently claims filming began in 1976, was suspended and picked back up in 1986 and it was releaed in 1991. However, the WINTERBEAST OFFICIAL WEBSITE (yes, amazingly there is one!) has a different story to tell. They claim this was filmed in 1989 (making no mention of the supposed 1970s footage) and that it made its home viewing debut in 1992 (via Tempe Video). Supposedly, the film utilizes both Super 8 and 16mm photography (which explains the variance in quality from shot to shot) and scenes were cheaply shot on video at one point, but eventually scrapped.

SBIG
Posted by The Bloody Pit of Horror at 1:04 AM 1 comment: